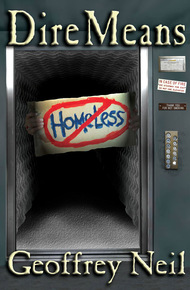 Geoffrey Neil writes noir fiction laced with a social conscience. He graduated from Cal State San Bernardino with a B.A. in Communication and then spent years in an outside-sales-induced haze of professional confusion. Life’s predictable challenges drove him to the keyboard where torrid personal-journal entries, pounded out late at night, led to a therapeutic obsession with writing. During the day he runs Mollifiers, an IT consulting company in Beverly Hills, California that goes by the slogan, “Technology Anger Management” His first writing gig was a weekly column called Technology Triumphs for a Los Angeles community newspaper. In 2009 he completed his first novel, Dire Means. His second novel, Human Resources, will be available November 1, 2012 and he has begun drafting his third novel, Wanton Disregard. See more at geoffreyneil.com.

What if a ruthless vigilante transformed one of America's most affluent, coveted beach-side cities and ended homelessness within its borders in a matter of days? In Dire Means this phenomenon occurs in an unforgettable way.

The ambitious mission isn't accomplished by any brilliant appeal to public benevolence or by relocating the homeless. An ingenious method uses carefully-targeted fear to cure public apathy toward the most helpless among us. Dire Means weaves a tale of a city under siege, its citizens forced to flaunt the Golden Rule as the only way to survive.

If you have ever contemplated the end of homelessness–despite the seeming futility of such a goal, or if you simply enjoy a story that will take you on an engrossing, original journey, test drive Dire Means.

If Keith Mendalsen had known that the sausage and egg croissant would be his last meal, he would have ordered two or three more of them at the drive-thru. He would have gorged on as many calorie-laden breakfast-menu items as he could devour—and keep down.

He put his scalding coffee in the cup holder to cool, gulped down the greasy sandwich in barely chewed hunks, and tossed the paper wrapper onto the passenger seat of his Mercedes convertible. As he pulled back into traffic for the two-block ride to his office, he wiped his mouth on a napkin, missing a crumb that stuck to the corner of his lip.

In nine days, Keith would be dead. In eight days, the crumb that clung to his lip would be a feast—if it were still stuck there to be licked.

Mendalsen Investments occupied the twelfth floor of the ALCO Development Building in Santa Monica, California. If the firm’s suite were a table, Keith’s private inner office would be the centerpiece that decorated it. A marvel of contemporary corporate architecture, it was enclosed in floor-to-ceiling glass and lit from within like a tropical aquarium.

He enjoyed a spectacular 180-degree view of the Santa Monica beach and pier on one side, and a view of his support staff’s cubicles on the other. Everything from his imported Italian credenza, to his throne-like chair—burgundy leather with gold buttons and engraved armrests—proclaimed his financial success.

This morning, a slow elevator had lit the fuse on one of his many bad moods. Then, after a heated phone call that ended with a client’s threat to fire him, he slammed the phone down and hurled his paper cup of piping-hot coffee at the glass wall that framed his door. Half of the searing French Roast exited the cup during his windup and burned the back of his hand. His first scream was all pain. The ones that squeezed out from his lips as he sucked his scalded knuckles were all anger.

He heard the heavy suite door click shut out in the entryway. Carrie, the temp, had arrived late for work. He pulled his mouth from the back of his hand and screamed, “Caaaaarrie! In my office now!”

He knew she would rush to him with the self-conscious subservience that he liked. Her face would be red; she blushed for almost any reason. Complaints, compliments, or any special attention aimed her way by anyone flushed the twenty-six-year-old’s cheeks, which then drained to blotch her pale neck. Keith had developed a perverse fondness for Carrie’s blushing during her first stint as the temp in his office. In fact, it was a secret reason he had requested her by name from her agency this time. After only a few conversations with her, he had learned how to work his words like a lever that controlled her complexion—filling her face full of red before pausing to let it subside for another refill.

She hurried to Keith’s office without putting down her handbag. What could she have done this time? She remembered how, two days ago, she had watched spit-laced words fly from Keith’s lips during a tantrum over an incorrect lunch order she had delivered to his desk. She took a deep breath and tried to exhale her nervousness. When she reached his door, she saw tentacles of coffee stretching down the glass wall and a toppled paper coffee cup on the carpet beside his desk.

Keith pursed his lips and shook his head. He rocked in his big chair and pointed to a bottle of water on the corner of his desk. “What is this?” he said.

Carrie knew that an obvious answer would infuriate him. Her mind raced for a more appeasing answer.

“What is this?” Keith said louder.

She tilted her head, allowing her shoulder-length blond hair to conceal half of her blushing face—half of what Mr. Fisher, her sixth-grade teacher, had labeled her chromatic honesty.

She remembered that Keith required a new, chilled bottle of water on his desk each morning. Today, Keith had discovered yesterday’s nearly empty open bottle before she had arrived.

“It’s your fifth day on the job. You should know your job description by now and yet I come in this morning to be greeted by your third major f–f–mistake!” He struggled not to cuss at Carrie, a promise he had made her agency as a probationary condition of future service. He needed the temps—for the time being.

Keith cut her off. “Well I need to ask you something, So Sorry. If I wanted warm, bottled water, why would I have shelled out eight-grand to build a kitchen with a fridge for you people?”

Carrie’s face deepened a shade. Her fingers tightened around her handbag’s strap for better grip on her composure.

“Answer me!” he shouted. “Why do I get to the office and find spit-temperature water on my desk? What is it with you?” He paused to let her absorb the disgust on his face. Carrie stood motionless, trying to compose another non-flammable answer.

“I’m sorry, Mr. Mendalsen. It won’t happen again.” She was rouge and Keith liked it.

“Damned right it won’t happen again—I’m not cussing at you,” he said, holding up his hands, palms out, to pardon his slip up.

Keith sucked the back of his hand again and studied her. She waited, lips parted, ready to offer her next apology. Keith had the last two assistants in tears by now, but the agency restriction on aiming profanity at their temps had removed one of his better tools.

“I do apologize, sir,” Carrie said.

“I understand,” she said. She shifted her weight to the other leg and drew her tongue across her dry lips.

“No, I don’t think you do understand. You’re just a no-career temp. Tell me how you could possibly understand?” He leaned toward Carrie, hoping to detect a more significant crack in her composure. Landing a verbal blow solid enough to unravel her would help him feel better. He couldn’t explain his sudden, sadistic urges. He only knew that from time to time they overwhelmed him like a furious itch that needed scratching at any cost.

Carrie’s eyes fluttered, but not soon enough to blink back a tear that slid down the crease of her nose. Keith enjoyed the tear. He liked that Carrie didn’t immediately wipe it. She let it lag beside her nostril for a moment—perhaps hoping he might not notice. Another tear followed, merging to fatten the first and she swiped them away before they could slide to her lip—just as the other temps had. He had badgered her effectively enough to add tears to her color and it calmed him. He felt powerful, in control again. He decided to go for another tear or two from the other eye before he was sated.

“So tell me, temp,” he said, examining her with a new sneer. “Were you a uhhhh, popular girl in school?”

The phone rang. Keith raised his eyebrows as if to ask if she intended to answer it. When she turned for her desk, Keith grabbed his phone handset and shouted hello.

As he talked on the call, Carrie sat down at her desk and looked at the 3 x 5 framed photo of her husband and three-year-old daughter. She had placed it on her desk for inspiration and comfort. Her husband wouldn’t tolerate the abuse she received under Keith’s supervision, nor would he find out. She had hidden it from him and would keep it hidden. They were in dire financial straits, which had required her to accept any available job. At Keith’s office, she netted six critical dollars per hour after subtracting the cost of daycare from her agency’s hourly wage.

Keith’s voice echoed through his open door as he laughed with his caller about Carrie’s incompetence. He ended the conversation by saying, “Alright, pal, I’ll be there in a half hour.”

As he passed Carrie’s desk, he threw his coat over his shoulder and said, “Get someone in here to steam clean that coffee I shouldn’t have had to throw. Make sure they use the odorless steam. I better not come back to an office that smells like fucking perfume.”

As Keith exited the office, he mumbled, “Unbe-fucking-lievable...” The door clicked shut behind him.