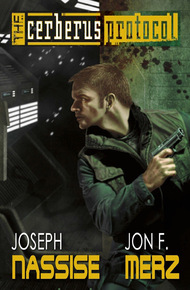 Joseph Nassise is the author of more than twenty novels, including the internationally bestselling Templar Chronicles series, the Jeremiah Hunt series, and the Great Undead War series. He has also written several books in the Rogue Angel action/adventure series from Gold Eagle/Harlequin.

The Cerberus Protocol by Joseph Nassise and Jon F. Merz

Visit exotic places. Meet strange new creatures. Do your best to kill them before they kill you.

On December 5th, scientists at CERN in Geneva, Switzerland ran a short test on the newly completed Large Hadron Collider. For that brief period, protons swarmed back and forth along the seventeen miles of carefully constructed tunnel and slammed into each other with devastating force, generating power the likes of which had not been seen since the moment of the Big Bang.

Just a few short hours. That was all it took for our world to be invaded by hideous creatures from somewhere beyond.

My name is Captain Memphis Stone, commander of the HELLstalkers, the armed response unit hastily assembled to face this growing threat.

This is the story of the men and women under my command, those who stand in the gap and shed their blood to protect the rest of humanity from creatures that we never imagined we'd ever face, not even in our darkest dreams.

Welcome to the front lines.

The roads were full of crashed automobiles and milling crowds of people, all of them wondering what had happened and asking themselves and each other if it could happen again. Consequently, it took Memphis almost twenty-five minutes to get to the CERN complex. By the time he reported in, the protestors in front of the main entrance had been cleared away. In their place were a mixture of Swiss, French, and U.S. troops and a clear series of checkpoints that made it quite clear to anyone looking on that it was strictly authorized personnel beyond this point.

Word of Memphis's arrival was swiftly relayed to the right individual after he produced his credentials. By the time Memphis managed to pass through the security at the gate and into the complex proper, he found a master sergeant named Mathers waiting for him on the other side.

"If you'll follow me, Captain Stone," Mathers said, and then he led him to where a HMMWV was parked a few yards away.

"What's happening, Gunny?" Memphis asked as he climbed inside and then waited for the other man to do the same.

Mathers shrugged. "Not sure, sir. Above my pay grade." He started the vehicle and quickly pulled out, heading down the main causeway, past the dome of the Center for Science and Innovation and toward the primary control facilities at the far side of the campus. The billowing cloud of smoke that Memphis had seen on the television was dissipating, but the thick scent of something burning still filled the air.

Mathers glanced over at Memphis as he drove, as if sizing him up. Memphis apparently met whatever criteria Mathers was looking for because after a moment the other man continued.

"And what does the rumor mill have to say about who the lucky s.o.b. is that gets to leads this team?"

With Dr. Reese's words of warning echoing in the back of his mind, Memphis didn't find it half as amusing as Mathers.