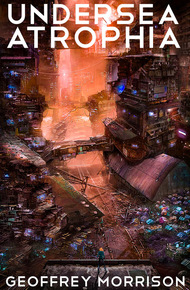 A great silence has settled upon a drowned world. In the final battle of their final war, the massive citysubs Universalis and Population reduced each other to ruins. One lays wrecked on the seafloor. The other, beached and lifeless, litters the island of pristine polar ice it tried to destroy.

Pockets of survivors huddle together. On the frigid surface, Ralla Gattley and Thom Vargas cling to life and each other. Below, the soldier Geran Lo fights relentlessly to free trapped and drowning civilians.

As they struggle against a world determined to kill them, a new and even more dangerous menace approaches.

Undersea Atrophia is the second book in the Undersea Saga.

The second of the authors to return from the very first StoryBundle, I was pleased to learn Geoffrey had continued his Undersea saga with Undersea Atrophia. The first was a chilling look at the remnants of society struggling to survive deep beneath the sea, caught up in circumstances that seemed as though they couldn't possibly get worse. This sequel establishes, yes, things can always get worse. I found these stories of a dark and unpleasant future relentlessly atmospheric and utterly fascinating. – Joseph R. Lallo

Geran Lo popped his head above the cover of the shipping crate long enough to survey the area, then ducked back down as the gunfire resumed. The brightly lit dome, like most older structures, was almost perfectly round, with an attached lock jutting out into the sea. Concentric circles of squat, leafy crops surrounded three beige single-story buildings. On the far side from where he and his men were, a long, gray, windowless structure hugged the interior edge of the dome for a little less than a quarter of the total perimeter. Lo's intel had said F327 was lightly defended, given its small size and marginal crop yield. "Lightly defended" seemed optimistic, as his team was pinned down just outside the main lock.

Lo looked around at his men. Seven armored soldiers, four from his previous team on the Reap, the others with decent training but marginal combat experience. Good men, all around. They'd set out from the Universalis two days earlier.

"Captain, this is Lo. We've got some resistance down here," he said into his comm.

"Copy that. Want me knock on the door?"

Lo got the attention of his men, then made their predetermined fist-hitting-open-hand signal for the knock maneuver. He poked his head up just high enough to see the far side of the small dome so he could witness the event. From the darkness outside the dome, searchlights snapped on, creating a massively bright spot hovering in the sea. The lights approached rapidly, at a speed clearly aimed to ram the dome. Lo knew, though his adversaries did not, that as fast as the transport sub seemed to be going, it was an optical illusion, using lights on extending booms to mask size and speed. The truth was, as soon as the lights went on, the sub was already slowing down. Lo held up a fist so his team knew their assault was imminent.

With a deafening clang, the sub rammed into the dome. Lo's men were up instantly, firing and advancing across the fields against stunned and confused defenders.

It was all over in less than a minute. Lo's men disarmed the dozen holdouts. The only casualty, one of the defenders, had been hit in the leg, shattering the bone. He wouldn't be running again, but he'd probably live.

"We're clear," Lo said over the comm. "One of theirs will be limping, otherwise we're good."

Lo rolled his eyes at Thom's jest at his recent promotion, then, for the first time, looked at the dome with nontactical eyes. Ring upon ring of green vegetables were the most numerous inhabitants. Already two members of his team were crossing the field to free the farmers held captive in the warehouse on the far side.