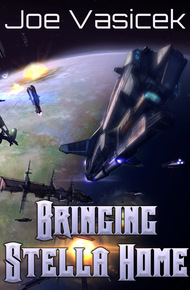 Joe Vasicek fell in love with science fiction with Star Wars as a child and hasn't looked back since. He is the author of more than twenty books, including Genesis Earth, Bringing Stella Home, Heart of the Nebula, and the Star Wanderers and Sons of the Starfarers series. As a young man, he studied Arabic at Brigham Young University and traveled across the Middle East and the Caucasus. He currently lives in Utah, which he claims as his home.

The war has arrived at home. James McCoy, the youngest son of a starfaring merchanter family, never thought he would face an invasion. But when an undefeated enemy slags his homeworld and carries off his brother and sister, nothing in the universe will stop him from getting them back.

Not all wars are fought on the battlefield. Hard times show the greatness in men, and those who give all are changed forever.

The first book in the Gaia Nova series, what struck me about Bringing Stella Home was how perfectly it delivered a classic tale of loss, fury, and revenge. It hammers home the concept that though so often whole worlds hang in the balance in sci-fi tales, those things that cut deepest are the personal things. It isn't the world you care about, but the people on it who are close to you. – Joseph R. Lallo

"Undock with the station," came Adam's voice over the intercom. "I'll be on the bridge in a minute."

A message from local traffic control flashed across the screen, ordering all vessels to cease undocking operations until properly authorized. James hesitated.

"I don't care what the port authority says, we're getting the hell out of here. Do it."

James swallowed and closed the message. He then sealed the airlock and began powering up the engines. The ship's computer ran through the warm-up sequence, checking the Llewellyn's various systems. Everything cleared. Behind him, the low hum of the engine sounded through the walls.

With the undocking process underway, James glanced out the forward window. Several of the other ships at the station had broken away from their airlocks, engines flaring as they desperately scrambled to climb out of Kardunash IV's gravity well. Out of the corner of his eye, he caught the flash of a larger ship as it passed into jumpspace. James tapped his armrests with his fingers and bit his lip; the Llewellyn was a local freighter, equipped only with sublight engines. No jump drive.

He glanced down at the blue oceans and swirling clouds of Kardunash IV, still nervously tapping his fingers. With the sublight engines, at least they would be able to escape the planet's gravity well—that was more than the people on the ferry shuttles had. More than—

He bolted upright in his seat. Ben and Stella—they were still on the shuttle! If they didn't find their way to another ship, then—

The door hissed open behind him, making him jump. His father strode onto the bridge, taking his seat at the pilot's chair.

"How are we looking?" he asked as he brought up the controls.

"Engine's at forty-five percent," said James, his voice quivering. "All other systems are go. We've sealed off the airlock and are ready to detach from the station."

"What news can you give me?" asked his father. "Where's the fighting worst?"

"The night side," said James, glancing at the scanners. "Dad—"

"Good. Drop the cargo and plot us a course for a full reversal. I want us climbing the gravity well in the opposite direction before our orbit takes us into the battle."

James frowned. A full orbital reversal meant using more fuel in ten minutes than they had burned in the last three weeks. Once they hit their target arc, there would be no turning back.

"Just do it. It's the only chance we have to get out of here alive."

James swallowed and turned to his console, hesitating only a second before keying the command to eject all cargo. Outside, more than fifty tons of high-grade steel jettisoned from the cargo hold. He watched on the display as millions of credits worth of cargo drifted out of the open bay doors and fell slowly toward the peaceful planet below. It was a terrible waste, he knew, but the Llewellyn would never be able to escape in time with all that extra mass weighing them down.

James turned frantically to his father. "Dad, Ben and Stella are still out there. We can't leave yet—not without them!"

His father hesitated over the controls, as if teetering over the edge of an abyss.

"We can't do that, Son," he said, his voice low. "We don't have time. They're probably on the surface by now, and if they aren't, they're caught up in the middle of the battle. We have to get out now, while we can. I'm sorry."

"No!" James screamed, sitting upright in his chair. "We can't just leave them like this!"

"We don't have a choice, James," his father shouted. "Now strap in and prepare for launch—that's an order."

He strapped himself into his seat and activated the gravitic dampers. Outside the main forward window, the stars spun and the station passed out of view as Adam maneuvered the Llewellyn toward the sun, away from the approaching night side of Kardunash IV. James swallowed, choking back tears.

"Prepare for hard burn in five, four, three, two, one—"

An invisible hand pressed James against his seat, starting gradually but gaining strength with each passing second. He glanced down at his computer—ten gees of acceleration outside the gravitic damper field, rising quickly. Inside the bridge, they were at point-five gees, rising to point-six.

He watched on the rear video feed as the station shot away, rapidly growing smaller against the backdrop of the planet's surface. The drifting drums of steel from the cargo hold shrunk until they were barely visible against the angelic white clouds.

A bright pink flash filled the rear display and the sky to the right of the bridge window. Only a nuclear bomb could cause an explosion that huge. The lights on the bridge flickered as the Llewellyn's cosmic ray shielding absorbed the radiation from the blast. In the rear video feed, the brilliant afterglow took several seconds to fade.

"Dad, we have to turn around!"

The scanners showed the changing path of the Llewellyn as she continued to accelerate at ten gees. The arcs curved up away from the night side of the planet, unraveling like a handful of lighted strands, each pointing to a predicted end-path at their current rate of acceleration.

"We have no way of knowing where they are or of getting to them. For all we know, they're already on the surface."

"You don't know that," James said quickly. "They might still be in orbit. They might be waiting for us, for all we—"

James fell silent. On the scanners, the arc of the Llewellyn's flight path peeled out from orbit entirely, their trajectory pointing directly away from the planet.

"Map a course for home," his father said, his voice low. "Help me switch to autopilot."

The counter ticked up to twenty gees outside—two-point-three on the bridge. Enough to make anyone squirm in their seats. James was hardly aware of it, however. His fingers flew over the keyboard and his eyes danced with the numbers across the screen, but all his motions were merely automatic.

Stella is so much better at this, he thought to himself. She should be the one setting the course—not me.

The thought no sooner entered his head than he remembered how they'd drawn straws to see who got to go planetside first. She was down there because of him.

His fingers became stiff, and his whole body began to shake. His eyes went wide, and his vision went blurry. He drew in a sharp breath, and tried in vain to bring himself under control.

"It should have been me," James cried, his voice cracking. He didn't even care. "Stella should be here—I should be the one down there, not her!"

His father reached out against the growing gee forces and put a hand on his shoulder. "I'm sorry, Son," he said. "We're going to get through this. Keep yourself together."

How am I supposed to keep myself together? James thought to himself, clenching his hands into fists. It should be me down there, not her.

On the rear video feed, a series of nuclear explosions cast brilliant bursts of light across the sky. The explosions faded slowly, reflected in eerie, nebulous hues against the twilight crescent of the night side of the world. He zoomed in and found the remnants of broken and destroyed ships, split hulls and falling debris.

James's stomach rose in his chest, and a wave of nausea nearly made him vomit. There had been people on those ships—real, living people. Now, they were all dead.

Were Ben and Stella among them?

He activated the feed controls and zoomed in, tracing the field of battle until he came to the Hameji ships. They had regrouped and were flying in formation now, despite all the chaos of the battle zone. As he panned out, the camera fell on a massive tube-like ship nearly twenty kilometers long.

James caught his breath. Blue light flared from the engines behind the enormous vessel, lighting up all the ships and debris behind it. He zoomed out as a massive asteroid shot out the end of the tube. At that resolution, the rock must have been at least half a kilometer in diameter—an awesome size for something moving so fast.

With wide, horrified eyes, he followed the giant chunk of space rock as it hurtled towards the planet. It struck the center of one of Kardunash IV's domes—one of the continent-sized urban centers, full of billions of people.

He gasped. A giant brown splotch rose up into the atmosphere like mud from the bottom of a stream bed. When it hit the upper atmosphere, it began to trace a teardrop band across the rest of the world, the muddy blackness tainting the white clouds a dirty gray. Not far from the first, a second asteroid struck, kicking up another black cloud of destruction. Down near the equator, a third plume billowed out—and then a fourth.

James felt the blood drain from his face, leaving his skin cold and clammy. He could hardly believe what he was seeing. The mass accelerators, the asteroids—it was Tajjur V and Belarius III all over again. The Hameji were slagging the planet, annihilating everyone and everything on the surface.

Ben, James thought despairingly to himself. Stella—I'm so sorry. His eyes burning with tears, he clenched his teeth together and balled his hands into fists.

No, he told himself. They're not dead. They can't be!