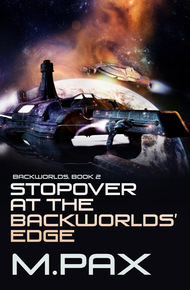 Stopover at the Backworlds' Edge by M. Pax

In the far future, humanity settles the stars, bioengineering its descendants to survive in a harsh universe. This is the second book in the science fiction series, The Backworlds. A space opera adventure.

Revenge is on Craze's mind. He chews on it every day along with the relentless dust on Pardeep Station. He dreams of grander wealth, enough to make his father choke.

That's the dream consuming him when the interstellar portal opens, spitting out a ship that should no longer exist. A battleship spoiling for a fight. Yet the war with the Foreworlds ended two generations ago.

One wrong move and the shaky truce will end. So will Craze and his friends.

M. Pax is another author with whom I've collaborated in the past, and The Backworlds novels are a special favorite of mine. Stopover at the Backworlds' Edge is the second of this series, and continues to uncover elements of the immense history of the setting. I love the idea of humanity adapting itself to ever more unforgiving environments, yet never seeming to get beyond those most primitive drives of jealousy, greed, and vengeance that have steered us since the beginning. – Joseph R. Lallo

The roaster sat in a cubby surrounded by an elaborate air flow system. Craze switched on the cooker and the fans. Within thirty seconds the delicious odor of baking ricklits kicked out all other smells in his place. Irresistible. His mouth watered. When his stomach bucked in a loud plea, he popped the one ricklit he'd left out between his lips, biting down on the tasty head, eating it raw, enjoying the crunch and burst of cream. Flavored much like perfectly deep-fried chicken, a customer had once said.

Chewing on the bit of protein, Craze tied on his apron. His rugged hands, which had put many wayward patrons out the door, washed the covers and sip spouts. Soon after, the jar parts got a rudimentary rinse in the basin of disinfecting gel. The yellow wasn't the right shade of yellow, long past its prime, dingy and faded, glopping like gravel because of all the grit stuck in it. Gently, he set each cleaned crock on a rack on the bar top, lining them up for the incoming customers.

The door scraped open. In walked one person. She stretched like the first rays of a moonrise, not looking anything like a Fo'wo or a covert agent. On her heels followed an entourage of breezy shadows, which closed in on her, dimming her and her silver light.

Craze rubbed at his eyes, wondering what had gone wrong with his vision. Did her shadow just move? Where was everybody else? He had enough tables to seat three hundred, stools at the counter to accommodate another two dozen, and could cram in more for those willing to stand, especially if Pauder didn't hang around to police things.

"That big, old ship just for you?" he asked.

The shadows cleared, finding walls and corners to cling to. Silver shimmered over the visitor's hair and skin, flowing like her kaleidoscope dress. The tinkling pitter-patter of falling glass beads followed her onto the bar stool in front of Craze. She perched delicately on the round cushion upholstered in a weary red. Donning a forlorn smile, she spread her empty hands. "Drink for a thirsty traveler? It's been a long journey from Bofeld. You know it?"

"No. Got any of them pretty, legal tender like chips?" He searched her top to toe, looking for something of value. Her empty hands and oily hair didn't appear very promising. Craze sighed, hoping her ship would take off soon, not wanting to deal with her begging for hours on end.

He feigned being very busy, washing crocks and placing them back on the rack he'd just taken them from, wiping off kegs under the bar and bottles shelved on the back wall, stirring the cooking ricklits. He shook some spice into his palm and added it to the roaster, dusting off the granules sticking to his hand onto the apron. His stomach rumbled as the fragrant aroma filled his nostrils, and he thought it a pity ricklits didn't reproduce faster.

Out the corner of his eye, he caught a dark shape flickering. It swooped over the counter, pooled around his feet and leapt, reaching for his face. Craze jumped, dropping the stirrer in his hand.

What crap was this? Shit. He'd be more pissed if she'd caused him to drop a bottle. "Tricks'll get you nowhere, dearheart. Currency here's chips."

"I'm tapped out, I'm afraid. But have I got a story for you. It's worth ten drinks, but I'll tell it to you for one."

If Craze had a water ration for every time he'd heard that, Pardeep Station would feel like a first-class world. "It won't be nothin' I haven't heard before."

"You haven't heard dis," she said.