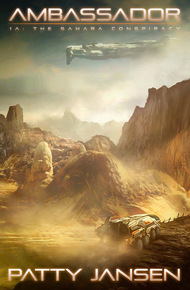 Ambassador 1A: The Sahara Conspiracy by Patty Jansen

Cory Wilson is woken in the middle of the night with a summons to appear in the president of Nations of Earth's office. An aid worker in Djibouti has discovered a shipment of alien guns.

As ambassador to gamra, the extraterrestrial organisation which controls the Exchange, the FTL wormhole network, Cory has often been critical of Earth's handling of extraterrestrial problems. This is his moment to shine, to apply his knowledge about alien customs, to, in the words of the president, "get those idiots out of there".

Except the usual suspects, the Zhori mafia who have caused trouble on Earth for a long time, are nowhere to be seen. This is something far more dangerous, something that involves all of northern Africa, something that provokes the anger of Asto, gamra's largest world. Asto's army is already prowling in orbit, ready to strike.

Another thrilling space opera by Patty Jansen, including this story was the result of a fair amount of debate and discussion. It is the second book in her Ambassador series, and it is better served by first reading its predecessor, Seeing Red—which we added on as a free book for newsletter subscribers. Once you've got the proper background, The Sahara Conspiracy blossoms into a complex story of earth's future and its place in an extraterrestrial community. – Joseph R. Lallo

THE CALL CAME late in the evening, a few hours after we had gone to bed. Exchange staff came to wake us, even though they knew we were on a flight before dawn, and I'd given instructions not to disturb us.

Dare I say the word honeymoon?

"It's very urgent," said the young girl who had been given the unenviable task to knock on our door and deal with my slightly rumpled appearance and even more rumpled temper.

I took the reader she held out to me. My eyes needed a few seconds to figure out if I was reading Coldi or Isla, never mind what was on the screen.

Words fought their way into the lingering fogginess of sleep.

Threat to security and Nations of Earth.

Seriously, what the fuck.

Thayu had also gotten up and stood as a warm presence behind my back. She looked over my shoulder. She read some Isla, but wouldn't understand the nuances of the language, or, in this case, the lack of nuance.

Mr Wilson, you are to see me in my office immediately regarding an immediate threat to Nations of Earth security relating to the African plans.

It was signed Simon Dekker, who was one of Acting President Sigobert Danziger's henchmen.

As soon as I'd read it, the text vanished. I stared at the blank screen for a few dumb second before I realised that this was one of those untraceable high-security messages, keyed to a high-resolution scan of my retinas that every Nations of Earth employee with any level of clearance had to submit. I was surprised that the thing worked, because my eyes certainly weren't working too well.

I laughed. "See us in his office? It's in Rotterdam. We're in Athens."

The young woman said, "This device was brought to the gate by a courier. He's waiting there in a car. Apparently there is a hoverjet at the local airport."

I looked at Thayu. She frowned.

That urgent, huh? she said through the feeder.