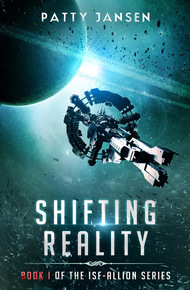 A few years ago, a military doctor walking the corridors of New Jakarta Space Station saved Melati's life. She signed up for the International Space Force to pay back her moral debt to him.

But her family thinks she has betrayed her people. It was ISF who forcefully removed their grandmothers and grandfathers from the crowded slums of Jakarta to work in interstellar space stations.

It is Melati's job to teach six-year old construct soldiers, artificial humans grown in labs and activated with programmed minds to serve in an interstellar war. Her latest cohort has one student who claims that he is not a little boy, but a mindbase traveller whose swap partner took off with his body. It soon becomes clear that a lot of people are scouring the space station for this fugitive, a scientist with dangerous knowledge about interstellar space.

The best place to hide in the space station is amongst the many cultures and subcultures of the expat Indonesian B-sector. Looking for him brings Melati into direct conflict with her people. She does not want to be seen as one of the enemy, but if the scientist's knowledge falls in the wrong hands, war will come to the station.

I have had the pleasure of working with Patty Jansen on a few different occasions, and I was thrilled to find she had few stories suitable for this bundle. In my opinion, one of the key strengths of science fiction—and indeed, one of the reasons many have fought to have it renamed speculative fiction—is its ability to peer into our future and see what new directions technology might take us. Shifting Reality is the first book in the ISF-Allion series, and it posits a world with remarkable new technologies that test the limits of identity and morality. A brilliant start to an excellent series. – Joseph R. Lallo

THE MINDBASE EXCHANGE office was between a travel agency and the Small Private Craft refuelling office. Melati entered the front foyer with its fake wood panelling and soft carpet. The front desk, where Rina normally sat, was empty, but a chime rang at the back of the office.

No one had come to the counter.

She leaned over the desk. Either Rina or her boss had to be near, because the computer was on, and the screen unlocked, the mindbase database open. All the times she'd come here to pick Rina up after work, closing the mindbase program was the first thing Rina did when leaving the desk, for security reasons. Apparently the StatOp enforcers loved doing spot checks.

"Anyone here?" she called again.

There was no sound.

Behind the desk, a door led into the back of the premises, where the labs were.

Melati walked around the desk and looked into the corridor with its gleaming polished floor. Signs on the ceiling read, Lab A, Lab B, and Emergency Exit. The light was on in the office at the very end.

"Hello, is anyone here?"

There was no answer, so Melati padded into the corridor, into the ever-present scent of hospital and the soft hum of equipment. The doors to the labs on either side were closed, but each had a small window looking into labs shrouded in semidarkness. Pinpricks of light blinked green. In those labs, people's bodies were kept alive and breathing while their minds travelled on the FTL bullet probe to their swap body.

The lit room at the end was Socrates' office, with comfortable meeting chairs and a wall screen displaying a field with flowers that changed to mountains with snow as Melati looked in.

There were a number of computers on the desk—all showing scan-entry screens.

On the desk stood a container with a half-eaten lumpia, and a cold-food smell filled the room.