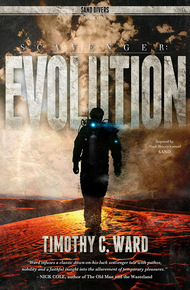 Timothy C. Ward is a Hugo nominated producer for Adventures in SciFi Publishing, who has been lost, broke and surfed with sharks on the other side of the world. He now dreams of greater adventures from his keyboard in Des Moines, Iowa. This summer he released two novels: his second Sand Divers book, Scavenger: A.I., where two parents use an ancient technology to fight a reproducing A.I. while trying to resurrect their deceased infant; and Godsknife: Revolt, an apocalyptic battle for godhood in the rift between Iowa and the Abyss.

Sign up for his newsletter for news, sales, giveaways and more: http://www.timothycward.com/newsletter/.

He can be found online at www.timothycward.com

In the future, sand divers search the depths for the lost city of Danvar and the truth behind their bleak existence. Divemaster Rush hasn't dove since he lost his infant. A job offer turns from an escape to a trap and the lure of a hardened heart to survive like anyone else would. One dive leads to another. Farther and farther from the surface, death and evolution change his world. He'll have to change too or watch his wife rise without him.

Inspired by Hugh Howey's world of Sand, but stands alone without needing to read Sand. Written and sold with his permission. Scavenger: Evolution takes the landscape of Dune and throws in the pacing and thrills of Alien.

One of the best developments in the rise of indie publishing is the atmosphere of collaboration and cooperation among authors that has simply never existed in traditional publishing. Case in point, Scavenger: Evolution. Drawing inspiration from Sand by Hugh Howey, this story takes the same elements and crafts them into an exciting new standalone adventure that has a cinematic pace. Tim Ward did a terrific job creating edge of the seat thrills in this launching point for his Sand Divers series. – Joseph R. Lallo

In a world buried to the nose in sand, Rush felt no choice but to let his ears live for him. River's moan slipped through the floorboards above him like a last desperate cry not to give up. There was life left to scavenge.

The soft and gentle releasing of breath drifted and disappeared into the belly of the Honey Hole, a tavern that reeked of stale beer and dried sweat.

Rush brushed his fingernail through sand embedded in the cracks of his table. His dream had once been discovering the buried city, Danvar, where the wood was unmarked and smooth, where he'd bring up enough spoil to make all of Springston live like lords.

That dream died with his son.

River's elongated cry soured in his heart's infection, where the memory of seeing his son face down in sand had cut open his soul and left him to the death that never ended.

Set near his hand was the mug of ale River's appointment had left. He had dropped it off with a cocky grin and, "I'll make her nice and loud for ya."

Now he lay on a naked and sweating River.

A man stood from a table across the tavern, leaving his compatriot head-over-folded-arms drunk. He looked at Rush, glanced down at the drunk, and pushed in his chair. The ker draped around his neck was bright orange with a horse's head emblazoned in white fire. Even the tower dwellers on the East side couldn't afford such vibrant colors. The pale cheeks and pink-red tan line cutting from nose to ear and circling his eyes identified him as someone unaccustomed to the hardness of a sun-burnt lifestyle. His gaze locked on Rush with pride in his distinction.

The man took a chair from a neighboring table and had a seat close enough to be brother or threat. He leaned in and whispered, "I hear you're Rushing, Springston's famous divemaster."

The honor of his past once again refused to leave him. Rush took another drink.

"I also hear you haven't parted the sand in years."

Rush glowered over the rim of his mug.

"I don't mean to cause waves, but I've got a job offer that could use your talents."

He hadn't had a decent job since Fisher died. Still. "I don't dive."

"Right. You shuffle a mop around a filthy whorehouse and drink warm beer while your favorite girl gets rowdy." The man split a grin worth cutting off. "That's a much better alternative."

Rush set his mug down carefully. "Would you like to see what else I can do with a mop?"

"Hey, I like that. And here I was, afraid you'd lost the vigor that made you the best."

River's panting increased in intensity. He nodded up at the balcony. "I hear you've never had the pleasure."

"I think it's time you parted sand, stranger. Whatever you're offering, I'm not interested."

Stranger leaned closer. His artificial scent matched the man's who'd given him his beer. Rush smelled a setup.

"Is money the reason you haven't…?" he double clicked his tongue and mimicked an ornery cat.

Why hadn't Rush met this guy the day he quit the school? He could have opened up a hole thirty feet deep and left diving in fashion.

Stranger went on as if his company was still welcome, "I've seen your tent, Rush. Not exactly the home you used to have, from what I hear. Is it?"

"You sure hear a lot that ain't your business."

"I hear only what is my business."

What does that mean? "Okay…what's your name?"

"Okay, Warren. The reason I haven't is I'm still married."

"You wouldn't be the first married bloke to slip between a whore's legs."

As if on cue, River let out her climaxed cry. Rush thought of the pleasure he had known making Star gasp the same way. It had been years.

"Besides, I hear you two are about as much in love as the sweaty cheeks I'm sitting on."

"You hear…whatever business you have in Springston, I suggest you take it elsewhere."

Rush wanted to say, "You better make it possible," but something told him he needed to find out why. "Lay your cards, Warren."

"All right!" Warren slapped imaginary cards on the table, burping a bit of beer from Rush's mug. One of the bar members glanced over his shoulder, but returned to his drink without alarm.

Warren inched close, revealing a gold tooth in his back row. "I have a very important job that could use someone of your skills, but I wasn't about to offer it without a little digging into your present state."

A very important job could be just what he needed. Something to distract him.

Warren seemed to read Rush's thoughts. "I'm ready to pay you enough for one dive—" he lifted a finger toward the balcony "—to do...whatever you want, for as long as you want it."

Whatever job a stranger offered for that kind of price shouldn't be worth the filth it would leave behind.

Unless you were Rush, and were already buried in it. He didn't have to use that money on River. Maybe just leaving would be enough. He took another swig of the free drink and let the warmth numb his fears. "Working here has diminished the value of talk."

Warren dropped a purple coin purse heavy enough to buy a trip as far away as he needed, even if it only had coppers. If it had gold…

He noticed Rush's interest, his hitched breath, and smiled. "And that's just a down payment."

Just like that, he could be free of this Hell. But his attachment to Star, a marriage as unwanted as the dirt under his nails, tugged at his conscience. River came back to mind, like a knife ready to use. Lying with her could break him free for good. And he'd be alive again, if only for a moment. As estranged as he was from Star, he didn't know why he felt guilt. They were worse than strangers.

But too weak to say goodbye.

He didn't care what the job was. I won't let you keep me here anymore. "I'll do it."

"All right, Rush is back." Warren slapped his arm.

Rush squeezed the coins inside the purse. Metal that couldn't satisfy his true needs, but metal nonetheless. To a poor man, it was something.

"Now, first order of business." Warren helped Rush up by the arm and guided him to the drunk passed out on his table. A hint of copper tainted the air. He forced Rush to stand beside the man while he stood, back to the bar, and looked at the floor.

Rush followed his gaze to a pool of blood seeping through cracks in the wood. The man was as still as Rush had feared.

Warren whispered, "I can kill you just as easy."

None of the bar patrons gave a lick about his sudden danger. "Why would you kill me?"

In spite of the new weight squeezing his ribs, he shouldn't have expected his exit from Springston to be easy. Rush did not back down.

"Good, now follow me." Warren slid a knife back into a sleeve at his belt.

The sleeve was somehow familiar. You didn't even see him reach for it.

Rush wanted one of the three bar patrons to glance over their shoulders as he left, ask him where he was going, who the stranger was and who the corpse was they had left behind, but none noticed. Rush was the guy that cleaned up their semen and vomit. They hadn't noticed him in years.