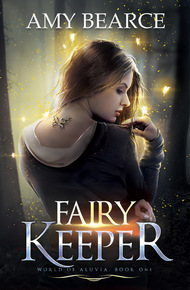 Amy writes stories for tweens and teens. She is a former reading teacher with a Masters in Library Science. As an Army kid, she moved eight times before she was eighteen, so she feels especially fortunate to be married to her high school sweetheart. Together they're raising two daughters and are currently living in Germany, though they still call Texas home. A perfect day for Amy involves rain pattering on the windows, popcorn, and every member of her family curled up in one cozy room reading a good book.

Most people in the world of Aluvia view the Fairy Keeper mark as gift, but not fourteen-year old Sierra. She hates being a fairy keeper, but the birthmark is right there on the back of her neck. It shows everyone she was born with the natural ability to attract and take care of the tiny fairies whose nectar is amazingly powerful. Fairy nectar can heal people, but it is also a key ingredient in synthesizing Flight, an illegal hallucinogen. She's forced to care for a whole hive of the bee-like beasties by her Flight-dealing father.

When the queen fairies all mysteriously disappear, her father plans on trading her little sister to his biggest partner in lieu of Flight he can no longer make. Sierra rashly promises to find a queen, if only he won't send her sister away. This promise leads her, a friend and an enemy far into the Old Mountains. The magic she finds there has the power to transform their world—but only if she can first embrace her calling as a fairy keeper.

Kids' note: "The one about the killer fairies and disappearing queens." Curator note: "Who, just entering teenhood, hasn't thought to rebel against their parents' or the society's expectations? I certainly have. But what if what you happen to be rebelling against well and truly has a potential of making your life miserable - and that of many, many other people? Do you rebel then, and if you do, what is the price you are willing to pay to put things right again, and maybe, just maybe better than they had ever been before? Hefty questions to tackle for an older MG book, but the school librarian and writer Amy Bearce does just that, and makes you beg for another shot to stay in her masterfully etched-out universe." – Alisa Gus, Curiosity Quills Press

LOST TIMEWhen they turned the corner at the clump of blackberry bushes where Phoebe would wait, Sierra paused. A haunting silence sat heavily in the meadow. No bass-deep thrumming of the fairies in their hatch rode along the breeze. No tiny lights like sparks flittered within the darkening trees. Her heart galloped. Where were her charges? Thankfully, her sister hadn't noticed yet.

"Phoebe, I need you to go back and start cooking, okay? We don't want dinner late for Jack. This won't take long, but they get irritated at dusk, and I don't want you to get hurt." That last part was not a lie.

Phoebe's shoulders sagged, but she knew a late dinner meant trouble. Finally, she headed back, dragging her feet, head tucked down into her chest. Her knitted shawl, too thin for the cold weather, hid her vibrant hair. Sierra gazed after her sister for a moment to make sure she was really going. If their mother hadn't died birthing Phoebe, maybe things would have been different. Whatever kindness had been in their father must have died right along with her. Phoebe and Sierra stuck together, but some days were better than others. Before she could ache over how much more she wished she could give Phoebe, Sierra turned her attention back to the fairy hatch.

There were no cages for Sierra's fairies. No wires, no lids, no glass. Except for the queen, they were so tiny they could fit through most holes, but they didn't need cages with a fairy keeper around anyway. She was the reason they kept coming back. They did live in a slatted wooden box that allowed easy access to their nectar, but otherwise they were free to come and go as they pleased. Unlike Sierra. She was trapped by her mark, her father, and by her love for Phoebe.

Sierra tiptoed forward. The sky was darkening, but there were no glowing wings covered in the nectar that dripped off them in their hatches. A sense of dread swelled inside her like the beginning of an earthquake. Her skin prickled as it did in that still moment before chaos unleashed destruction.

When she reached the hatch, it appeared that a pile of tiny rainbow flower petals were spread on the ground. For one moment, she didn't understand. Then her knees gave out when her mind made sense of the sight.

All the fairies were dead. No movement, no noise, no vibration, no light. Sierra searched the pile for her queen, the tiny wings rasping softly as she sifted them through her hands. They were like dry silk as they slid down her palms, which began to shake. She dropped the last dead fairy from her fingers and stood in shock. All dead but the queen, who was missing. She cursed, glancing around the clearing in a panic. Where was the queen?