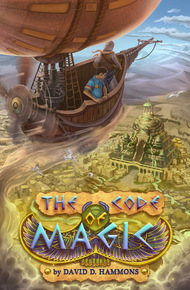 While visiting Cambridge during my time studying abroad, I tried to sneak into C. S. Lewis's old apartment. I wanted to stand where the old master stood. I wanted to glean bits of imagination that no-doubt still clung to those walls. A locked door barred my path, and I fled to the safety of the campus pub. It has been my goal to live a life that is notable as the life of that master of writing. I've climbed the slopes of Machu Picchu, swam in Loch Ness, smuggled ice cream into China, and made moonshine in my hometown. I studied writing and business in school, and gave up a position in my family's Black Walnut company to chase my dream. Life, if you make it so, can be an adventure.

Despite all my adventures, there is no greater journey than that which can be found in a book. It was cartoons that got me into writing, works meant for children that as an adult fascinated me with their joyful outlook. It was the old masters, Lewis, Tolkien, Hemmingway, Vonnegut, who challenged me to live an adventure of a life, and then write even greater adventures in books. Perhaps one day I'll make it into that old Cambridge apartment. Perhaps one day I'll be invited.

The Code of Magic by David D. Hammons

Monsters, ghosts, dead, undead, and Frankensteins still unsure if they're depressed because they're abominations against existence or if it's just been forever since they've been laid, all can find love with Rasputin's Supernatural Dating Service!

Eli Kowalski has seen his share of freaks as a Certifier for Rasputin's Supernatural Dating Service. It's his job to weed out the real monsters from the weirdos with too much black lipstick. While on a routine certification, he comes across the Tablet of Nicaea. A powerful witch and self-proclaimed "Men's Rights Activist" wants to steal the tablet and use it to kill all supernatural creatures so that "nice guys" like him can have a better chance with women. Eli must unite with the supernatural policing agency, the witch's ex-girlfriend, and the constantly-naked Rasputin to save supernatural creatures in the name of love. He'll probably excuse himself from Rasputin's victory orgy, though.

Rasputin's Supernatural Dating Service casts a humorous, silly light on romance in the paranormal community. Fans of Terry Pratchett and Neil Gaiman's Good Omens and Christopher Moore's A Dirty Job will find similarities in the book's comedic treatment of the supernatural.

Kids' note: "The one where you fly on the airship over the pyramids!" Curator note: "When an author sets out to make ancient mythology fun, giant, rather scary things cuddly and accessible, and steampunk just the sort of technology you want your kids getting their hands dirty with instead of their iPods, and succeeds, you know you are in for a wacky ride with your monster friend sharing the wheel. Author David Hammons brings his own, delightfully skewed outlook to a trip of a story that takes you into a distant past, yet keeps you firmly grounded in exactly how the spunky, modern-age hero acquires the skill set he does, and yes, makes you and your kids long for an airship of your own." – Alisa Gus, Curiosity Quills Press

Green fire erupted out of the masts as the balloon inflated. The airship slowed its plummet and evened out, gliding forward just above the canyon.

Alex heard a loud thump at mid-ship as Mo crashed to the deck. He didn't seem to care about the descent, and rose to his feet to attack a crack that had burst in the main mast.

Most of the griffons were content to let the ship fall, but some had chased the vessel down. These quickly caught up with the airship and resumed their attack on the cables and balloon.

Alex had worried this would happen, and shoved forward the lever that controlled the tail, sending the airship into the canyon.

The air thickened near the canyon floor. Alex kept the wheel steady, subtle changes in the tail and wings to keep from scraping a wing off or plunging into the roaring river racing below the hull.

The griffons struggled to stay close to the airship without hitting the canyon walls. The arch came closer, and Alex wasn't sure if it was big enough to fit the airship through. The gap became smaller and smaller the closer he got.

The griffons leapt off the cables and balloon with a shriek of sudden fear as the airship slipped through the gap between the archway and the canyon floor.

"Stupid awesome!" Alex cheered. He took hold of the levers that controlled the gas and the tail, pulling them back as far as they could go.

The ship went vertical, flying into the clouds with the same speed as it had previously fallen. Alex grabbed the wheel and held on like he was riding an out-of-control rocket.

The wheel rolled and weaved, and Alex could hear the snapping of cables struggling with the speed. Mo struck them and looked like he was flying as he leapt from port to starboard tightening bolts and cables. Once Alex planted his feet, piloting the ship at a horizontal position with the horizon, he looked down and saw the few griffons who'd stayed with the ship fading into the distance.

Up ahead Alex saw a thick layer of endless clouds. He held his breath as the ship cut through the clouds like a submarine breaking the surface of the ocean. With nothing but blue sky overhead and a sea of white below, Alex pulled the levers to a central, locked position, held the wheel still, and steadied the airship into a level flight. He braced his hands against the spokes of the wheel, staring at the sky as his knuckles turned white. Alex took two breaths, kept his eyes wide to the sun-kissed clouds, and raised his fists in the air to shout, "Yes!"