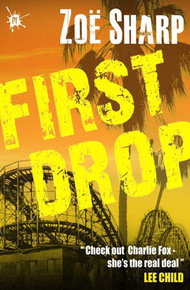 Zoë Sharp opted out of mainstream education at the age of twelve and wrote her first novel when she was fifteen. She created the no-nonsense heroine of her highly acclaimed Charlotte 'Charlie' Fox crime thriller series after receiving death-threat letters as a photojournalist.

If you haven't met Charlie Fox, the Chicago Tribune described her as: "Ill-tempered, aggressive and borderline psychotic, Fox is also compassionate, introspective and highly principled: arguably one of the most enigmatic -- and coolest -- heroines in contemporary genre fiction."

In his introduction to the Vengeance anthology, Lee Child said: "If I were a woman, I'd be Zoë. If Jack Reacher were a woman, he'd be Zoë's main character, Charlie Fox."

Zoë's work has been used in school textbooks in Denmark, made into a short film, optioned Twentieth Century Fox TV, inspired an original song and been nominated for numerous awards including the Edgar, Anthony, Barry (twice), Benjamin Franklin and Macavity Awards in the United States, as well as twice for a CWA Dagger Award in the UK.

Nominated for the Barry Award for Best British Crime Novel.

‘The guy in the passenger seat was closest. He got out first, so I shot him first. Two rounds high in the chest.’

It should have been an easy introduction to Charlie Fox’s new career as a bodyguard. In fact, it should have been almost a working holiday. She just has to look after the gawky fifteen-year-old son of a rich computer programmer in Fort Lauderdale, Florida. Trey Pelzner is theme park mad and in theory all Charlie has to do is baby-sit him on the rollercoasters.

The last thing anyone expected was a determined attempt to snatch the boy, or that Trey’s father and their entire close protection team ? including Charlie’s boss, Sean Meyer ? would disappear off the face of the earth at the same time.

Now somebody out there wants the boy badly and they’re prepared to kill anyone who gets in their way. Evading them, in a strange country, takes all the skill and courage Charlie possesses.

As she soon discovers, once you’ve hit the first drop there’s no going back, and you’d better hang on tight because you’re in for a wild ride.

"Non-stop action and an ultra cool ex-soldier biker chick bodyguard for a main character made this a must have for the Thriller bundle."

For the third time that morning I shut my eyes tight in the absolute and certain knowledge that I was just about to die. Around me, people were screaming. Lots of people, but the prospect of dying in company did nothing to alleviate the terror.

My stomach lurched as we started to fall. Actually, fall doesn’t begin to describe our horrifying descent. Plummet was more like it. An endless roaring plunge. My hair whipped at my forehead, the sheer punch of the wind pulling my cheeks back to bare my teeth in a final death-mask travesty of a smile.

I just prayed that the expression didn’t stay with me post mortem. Otherwise, although I was unquestionably about to die young, it seemed I was destined not to leave a beautiful corpse.

Then we bottomed out, the rollercoaster squatting into the compression. Before I’d time to be thankful I’d survived another first drop we crested a small rise and bowled into a left-hander so severe the wheels of the open car I was riding in seemed to bounce right out of their tracks and shimmy sideways towards the outside of the bend. Beyond the token piece of safety railing, it had to be at least fifty feet to the ground.

The coaster was constructed out of what had looked to my dubious eyes like a hastily nailed-together clutch of old railway sleepers. I tried to tell myself they were checked, religiously, every day, that the theme park owners would be fools to let anything happen to their paying customers. But in the back of my mind I could already hear the sober voice-over of the dramatic reconstruction after the accident.