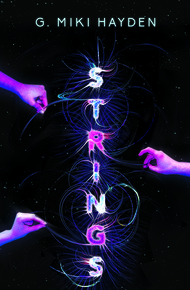 G. Miki Hayden, strongly believes in alternate universes and has written about them in her adult novels Pacific Empire (which won a New York Times rave) and New Pacific.

"Nothing in time-space is fixed," Miki says, a distant look in her eyes. Miki won an Edgar for an historical crime story and has a couple of writing books in print.

At the moment, she generally lives with millions of other people in New York City in a three-dimensional, temporal world but is exploring other realms.

Robert, an ordinary boy, finds himself in a newly chaotic world. Buildings move when and where they please, and time jumps around according to no known laws of physics. For Robert, getting to his regular school in the morning is next to impossible. As for getting home...

But then, Holden - a boy he and his friend, Nila, meet in a cave - offers them a string. No, not twine, but a string of the kind that forms the universe. Teeny and tiny, and invisible to the naked eye, this string will take Robert and Mila to their homes and way, way beyond...

Accompanied by a memorable cast of characters, Robert and his friends follow the string on a journey across time, space, and dimension to discover the answer to a mystery: Who has caused the world to fall apart?

Kids' note: "The one about different worlds. And buildings that move." Curator note: "Some say there is a string that ties the time, universe, and everything together, and in Miki Hayden's easygoing romp with deeper undertones of finding your own strength in the world that may be dancing a little - or a lot! - under your feet, she tackles this very, rather esoteric, notion - and maybe, possibly teaches us about quantum theory, while she's at it. What's not to love?" – Alisa Gus, Curiosity Quills Press

Eventually, a school bus came, and Robert climbed on. The driver, a gaunt, harried-seeming man in jeans, wasn't anyone Robert had encountered before. "I go to Hudson Junior High," Robert said tentatively as he passed. Usually, the drivers carried walkie-talkies to get the current heads-up on the locations of the schools, although often they just randomly drove the streets looking for them while they picked up students.

The other kids stared at Robert when he walked down the aisle. The atmosphere on the bus was pretty subdued. No one except two pre-teen girls, murmuring to one another in the back, was talking. Probably nobody knew anybody else. Robert took the nearest empty seat, but the moment he sat down he knew he'd made sort of a mistake. The person next to him wasn't a person, exactly—she was a girl. And this one was intoxicating and dizzying, as well as slightly terrifying.

He didn't have time for this now. He already had enough to worry about. "I know you," his seatmate said in a low voice, as if afraid that someone else would overhear. Robert checked behind them to see if anyone was listening—sure, maybe, and so what? He finally looked at the girl, but didn't recognize her. Though was it her, or something around her that shined into his eyes? Her radiance was dazzling. She had short brown hair and an ordinary-style, no-makeup presentation that hid some special beauty. He was immediately taken by her as anyone would be by the great warmth her shining smile revealed. "Well..." she said and then went silent. Robert had no idea how to answer her, so he didn't reply. The bus continued on the prowl for other students as well as for the students' schools. Kids got on the bus and sometimes off. "Hudson Junior High," Robert repeated, hoping he was speaking loudly enough for the driver to hear, but not so loud as to draw everyone else's attention. "I'm not a miracle worker," the man answered irritably. He brought the bus to a sudden halt. "Here's a school. The rest of you can go in there. They have to take you." He opened the door to let them off. "This isn't Hudson," Robert protested, hearing an hysterical note creep into his own voice. He was ready to fly off the handle and had to try hard to rein himself in. He understood how impossible finding everyone's usual school must be in the jumble that their town was now, but still! The girl jumped up from her seat and waited for Robert to make his move. "What do you care what school it is?" asked the driver, also a little over the edge. "What actual difference does it make?" He had a point. Robert hadn't gotten to his own school at least a couple of times in the last few weeks. Once, he hadn't gotten to school at all, but had seen his house and had just gone home.

But now, pressured into it by both the girl and the driver, Robert stood. He had to admit that though he wanted to scream at the driver for not doing his job, he was pleased to see at least one adult rattled by the depressing weirdness of it all. When Robert moved an inch, the girl moved to within a fraction of where he stood next. Little by little, he let her coerce him into the aisle until, finally, after several other students passed them to the front steps and exited, the two temporary seatmates got off the bus.

The vehicle empty, the driver slammed the doors resoundingly shut, gunned the engine, and within seconds was gone. Robert felt sadly abandoned. The five of them standing there riveted their attention on the school. If they trotted over immediately, they were likely to make it inside before the building picked itself up and began to wander. Maybe.

Collectively, they rushed toward their supposed sanctuary. Yet why should the school promise anything to them but further difficulties and more uncertainty? "I go to Hudson, too," said the girl, practically out of breath as they ran. "I'm in ninth grade." Robert, of course, was—or `had been,' should he say?—a year behind her. She, as he'd already guessed, was therefore unapproachable, out of his reach. Not that he could ever in his life hope to link up with such a shining, exquisite being.

The bus refugees slid in through the giant building doors, which someone then closed behind them, afraid maybe that the entry would be pulled off the hinges if the school began to move. But, although the building stayed in place beneath their feet, Robert was at a loss as to where they should go.

"Come on," said the girl, yanking on his sleeve, then pointing. "There's administration." Robert and two others, a boy and a girl each about nine or 10 years old, followed her obediently down the hall. She was an angel on earth, Robert decided, hence the illumination all about her. Or the sun had just been shining in the window.