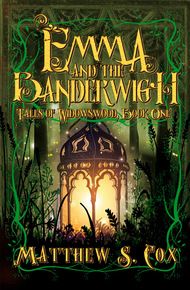 Originally from South Amboy NJ, Matthew has been creating science fiction and fantasy worlds for most of his reasoning life. Since 1996, he has developed the "Divergent Fates" world, in which Division Zero, Virtual Immortality, The Awakened Series, and the Daughter of Mars series take place. More recently, he has forayed into young-adult and middle grade novels.

Matthew is an avid gamer, a recovered WoW addict, Gamemaster for two custom systems (Chronicles of Eldrinaath [Fantasy] and Divergent Fates [Sci Fi], and a fan of anime, British humour, and intellectual science fiction that questions the nature of reality, life, and what happens after it. He is also fond of cats.

Emma and the Banderwigh by Matthew S. Cox

Ten-year-old Emma doesn't believe in faerie tales or monsters that secret children away in the night—until she meets one. She lives in a quiet village at the edge of Widowswood with her parents, her Nan, and her little brother, Tam. Ready to abandon the whimsy of childhood, she finds the boredom of chores comforting and Nan's fanciful bedtime stories silly.

One morning, a wan and weary older girl staggers out of the woods and sets the entire town aflutter with whispers of a child-stealing monster lurking in the forest. Nan tells her of the Banderwigh: a dark soul who feeds on sorrow and drains the life from children's tears.

Darkness comes calling on Emma's happy home, threatening the reality to which she desperately clings. The impossible becomes more and more real, forcing Emma to reach inside herself for the ability to believe. Her family depends on it.

Kids' note: "The one about the big forest, and the monster from her grandma's tales." Curator note: "Having been in publishing for years, I have never met anyone quite like Matt Cox, an exceptionally talented, prolific author (and recovering gamer), who is equally at home in a whimsical world of children's books, as he is tackling issues of far-older skewing juvenile rape, mental illness, human trafficking, and cyber crime in the 23rd century. With Emma, he's masterfully tapping his warmhearted, folklore-influenced side, and while slightly dark, just as the woods that lure his 10-year old protagonist from her cozy home, ultimately it is a story about hope, family, and keeping one's promises no matter what, and if that's not the lessons we want to teach our children, what is?" – Alisa Gus, Curiosity Quills Press

A path of irregular stones led in a twisty curve to the privy shack. The old, dark forest gleamed with patches of white-azure in the unearthly light of a full moon. Less than a hundred yards past the outhouse, the edge of Widowswood flickered with strange spots of glow. Nan called them Faerie Lights. Emma figured they were bugs, like fireflies, only bigger and afraid of people. She hesitated, watching them drift back and forth with motion quite unlike insects. After Nan's story, and with the strange mood in the air, she was not so sure.

Tam tilted his head up to look at her when her grip on his hand tightened. Thick brown hair circled his face. He gave her an inquiring stare, then bounced a few times and grabbed himself. Emma brushed aside her fear and extended one tentative foot toward the path. "Gah," she whispered, as she found out just how cold the stones were at night. "So much for the start of summer." She pulled him along by the arm in an ungainly run intended to minimize how long her feet had to touch the freezing rocks. A few seconds later, they halted by the small outhouse. Emma let go of his hand to open the rickety door. Tam leapt through and tugged at the handle. He put a hand on her chest when she went to follow him in. She cast an uneasy glance at the woods. The pure white nightdress glowed in the moonlight, a beacon that left her feeling vulnerable. "Pi-vate," he said, pulling the door shut and locking it in her face. Never mind that three or so hours ago, they had shared a bathtub. Emma squinted, not wanting to show fear of being out alone at night. Nan's story had gotten to her. She held the lantern up, free arm across her chest in a vain attempt to stifle the shivering. The old one was just trying to scare her. There was no such thing as child-stealing monsters that came out of the woods at night. Still, she would have rather been inside a space with a locked door. "Hurry up," she whispered. "It's cold. Can't start." "I know it's cold. That's why I'm telling you to hurry up. I thought you had to go b ad." "I does." "The wind is blowing right through my dress. Let me in." "No. Pi-vate." The privy shifted as he moved inside. "You scared of a Bandy-wee?" "Am not." She scrunched her toes in the grass. It had gotten quiet. "Okay, maybe a little." He giggled. A twig snapped. Emma gasped, raising the lantern. She peered around the side of the little shed, finding nothing. "Please, I won't watch. I'll keep my eyes closed." Silence. She imagined him blushing. She realized the night sounds had ceased. No crickets chirped, no birds tweeted, and no distant animals moved about―not even the low moan of the wind.