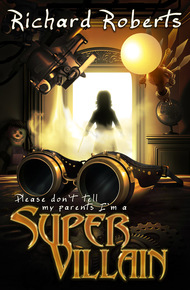 Richard Roberts has fit into only one category in his entire life, and that is 'writer', but as a writer he'd throw himself out of his own books for being a cliche.

He's been writing from childhood, and had the appropriate horrible relationships that damaged his self-confidence for years. Then out of nowhere Curiosity Quills Press demanded he give them his books, and here he is.

As for what he writes, Richard loves children and the gothic aesthetic. Most everything he writes will involve one or the other, and occasionally both. His fantasy is heavily influenced by folk tales, fairy tales, and mythology, and he likes to make the old new again. In particular, he loves to pull his readers into strange characters with strange lives, and his heroes are rarely heroic.

Penelope Akk wants to be a superhero. She's got superhero parents. She's got the ultimate mad science power, filling her life with crazy gadgets even she doesn't understand. She has two super powered best friends. In middle school, the line between good and evil looks clear.

In real life, nothing is that clear. All it takes is one hero's sidekick picking a fight, and Penny and her friends are labeled supervillains. In the process, Penny learns a hard lesson about villainy: She's good at it.

Criminal masterminds, heroes in power armor, bottles of dragon blood, alien war drones, shape shifters and ghosts, no matter what the super powered world throws at her, Penny and her friends come out on top. They have to. If she can keep winning, maybe she can clear her name before her mom and dad find out.

Kids' note: "The one with the goggles, where she does fun things, but they call her a bad guy, and think she's the best." Curator note: "In the super-fun, altogether irreverent world where becoming a supervillain or a superhero is as simple as deciding on a profession, and super abilities often run in the family, as do alliances, Penny finds herself an odd girl out - that is, until her latent powers wake up, and make her, a daughter of two superheroes of great renown, a new kind of supervillain. The problem is, as the multiple #1 bestseller author and ex-...a ton of different, exciting things, Richard Roberts tell us, she's not so sure it's a bad thing." – Alisa Gus, Curiosity Quills Press

Claire, bless her as the best friend a girl could have, heaved a toolbox onto the table.

I grabbed a screwdriver and opened up the casings. A length of copper wire, any battery, it wasn't a complicated device. It had to... what was the word? Modulate? It wouldn't be exactly the same signal constantly. It had to work in a pattern. I needed... I didn't know the name of the part I needed. I tried to pry some electronics off a circuit board with a screwdriver, and it snapped in half.

"What are you looking for? Maybe we can find it," Claire asked.

I shook my head. "I've got what I need here. Just have to rearrange some things."

"You can't rearrange a circuit board. They're made that way in a factory. You'd have to recycle the whole board and start from scratch. We don't carry blanks." Ray was trying to be gentle, but it was useless because he was wrong. Or he was right, kind of.

Recycle. I'd have to recycle the whole board.

"I need... metal cutting tools," I begged. Was I begging? My voice sounded so quiet. Yes, I needed those tools. I couldn't let this go.

"I don't think there are any in a computer lab, Penny," Claire warned.

Ray's eyelids lowered, and his grin widened. He'd thought of something. "There aren't, but nobody's using the shop classroom in the morning."

"There's a shop class?" Claire and I asked simultaneously.

"It's downstairs," Ray told me, grabbing our hands and pulling us out the door.

"There's a downstairs?" Claire and I chorused again.

He dragged us to the corner stairway. There were the stairs going up, like I'd expected, and there were stairs going down. I'd been to Northeast West Hollywood Middle for three years, and never noticed them.

It felt like a miracle. The tools I needed were down there. I skipped down the stairs ahead of Ray and ran along the short, blankly white hallway. One of the doors said "Shop," and I flung it open and was immediately surrounded by ugly, crude versions of all the mad machines in Dad's workshop that I'd have to find the names of.

I knew what I needed. Gears, lots of gears. I found them. Magnets, electricity. I flipped on a saw and sliced up the pipe into thin segments, then squeezed them in a vice. It was obvious, wasn't it? You could recycle anything. Even energy, sort of.

Stop trying to find words. I didn't know what I meant, but I could see it.

I twisted the top segment into place. It looked like a centipede. I sighed, put the soldering iron into its brace and turned around to lean against the table until my muscles stopped shaking. Ray and Claire stared at me like I'd made a second head instead of—

"What is this thing?" I brandished the freshly-minted contraption. Large portions of it had no cover plates. There was just no way I'd made gears that tiny, much less fit them together.

She and Ray really looked scared. No wonder. Was that a psychotic break? I felt so tired now, but relaxed. Well, if I'd stressed out so badly I'd made this ridiculously intricate piece of modern art, my parents would be sympathetic. Therapy wouldn't be so bad.

"I think it's just—" I started, absently twisting it in my hands. It resisted, but turned, like a crank. And just like a crank, it kept turning. Then it flipped, grabbed my hand with its many legs, and crawled up my arm.

Claire squealed, but I wasn't afraid. I'd made it. I knew it wasn't going to hurt me. That was about all I knew.

Ray got there before either of us. "Penny, you made that. You have superpowers!"

My eyes stung. He was right. He was so right! I lunged forward and grabbed both of them and squeezed them in a hug. A miniscule electric charge arced through me as Ray's not-as-skinny-as-I'd-have-thought chest pressed against mine, and he must have felt the same about Claire, but... forget that!

"I have superpowers!" I crowed, my voice squeaking like a mouse's. "Just like Dad's...! Almost like Dad's." I saw Dad work all the time. He had to do research, lots and lots of research, and he knew exactly what he was building ahead of time and what it did when he finished.

"I made this." I pulled back and held up my hand as the little automaton crawled up that arm and fastened itself around my wrist like a bracelet. "I have no idea what it does."

"It's an inscrutable little machine, isn't it?" Ray leaned in to peer at the snowflake gears.

Who cared about the details? I was a superhero!