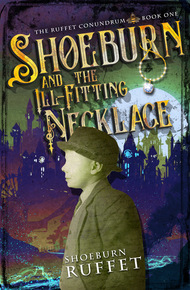 Shoeburn Ruffet has no formal education, thinks chickens should have bigger wings, and has lived half his life with the same suspenders. He spends days looking out a keyhole, and he thinks you know as much about him already as you should ever know.

Tea is his drink of choice, but if it's too hot it's not tea anymore and is a third degree burn instead. During his last visit to the graveyard, Shoe remet four people whom he had forgotten about. He wants you to know that he knows nothing about Regina Wendle or her necklace.

He is constantly rethinking the definition of "private diary literature."

Shoeburn Ruffet is forced into finding the whereabouts of a business magnate's lost piece of jewellery. Regina Wendle, the most powerful woman in Welt Foot and the business magnate,

will unleash bees, sink phoney submarines, and sabotage helicopter outings until her necklace is found. Shoeburn will do slightly less exciting stuff to figure out what the necklace's true purpose is.

He'd just rather not be there at all.

Kids' note: "The one about the boy's mom under the fountain. Oh, and the Great Depression. And the scaredy cat dad." Curator note: "I am calling it a bonus bonus story. Not due out until late 2017 / early 2018, this early MG novella for any age made me literally snort out loud - and shudder at such a heartwarming image as rivers of hot honey obliterating my home. If Lemony Snicket had a teacher's bent and was into traveling into alternate 1930's complete with private submarines and banks of television sets all flicking on at the same time, this would be the Shoeburn adventure in the nutshell - and frankly, I couldn't wait to share it with everyone!" – Alisa Gus, Curiosity Quills Press

My father was a banker, and I was a boy who thought one plus one was potato. I didn't know everything I should've known, and as a result, I missed things I should've seen. This caused me to take a much longer time to figure things out than so-called 'exceptional citizens of society.' My father was one of those people, according to other people, who surely knew of these things, having themselves been called the same by those equally in the know. Walking downtown with him, I ruminated on how I didn't know why he was an exceptional citizen of society, however,

because he didn't say much. I thought important people always had lots to say because of all they did. I also didn't know why people said Welt Foot was a place of "plentiful mischievousness." I never figured out the first thing, about my father, but the second thing, about Welt Foot, I learned through my dealings with a certain Regina Wendle.