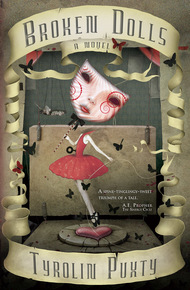 I'm a Jack, or more accurately, a Tyrolin of all trades.

I have been in the Top 25 of the Australian Songwriters Association and Top 25 of the Australian Independent Music Awards, was awarded an Australia Day Award for Music in 2014 and for Arts in 2015. I own a performing arts school, teach creative writing and host a podcast called HooPod, which is part of Felicia Day's Hooman community. Chocolate, cats and writing take up the majority of my time. Can you blame me?

She helps the professor create other dolls, but they don't seem to hang around for long. His most recent creation is Lisa, a sly goth. Ella doesn't like Lisa. How could she, when Lisa keeps trying to destroy her? Ella likes the professor's granddaughter though, even if she is dying. Gabby is like Ella's personal bodyguard. It's too bad the professor wants to turn Gabby into a doll too, depriving her of an education...depriving her of life.

With time running out and mad dolls on the rampage, Ella questions her very existence as she unearths the secrets buried in her past; secrets that will decide whether Gabby will befall the same fate...

Kids' note: "The horror one, with the creepy goth doll and all the tanks." Curator note: "Every once in a while you come across a book that really transcends a classic definition of its genre, and becomes a truly crossover piece you can brag about to friends and family of any age, and then spend quite a few evenings talking about, sharing a glass of wine, once the kids have gone to bed. For me, Broken Dolls is such a book, that is as much a story of growing up, as it is about accepting that some things really may be too broken, and that letting them go may be the best gift you can give someone that used to be such a big, integral part of your life. And man, does the multiple national music award winner and writer Tyrolin Puxty ever deliver on this theme! Oh and yes, creepy dolls and dangerous cats do abound, although soldiers do not." – Alisa Gus, Curiosity Quills Press

I don't remember being human. Probably because I don't want to. The professor tells me how cumbersome the body is and how aches and pains are a way of life. He says this way, I'll never feel any pain and can dance for as long as I like, never growing old, never damaging my joints.

He calls me his little broken doll. **

I rest my hands on the professor's thumb. I'm about the size of his foot, but my arms are disproportionally small. I struggle performing mounts because I can't grip my ankle, but the professor promised he'd fix it soon.

He's holding another doll in his hands, frowning as he adds intricate details to her face. He's serious most of the time, and I have to really concentrate to hear him speak.

"You're making a new friend for me?" "I am." I'm sure he means no offense, but his tone sounds like he isn't paying any attention to

I lift my hands from his thumb and smooth the crinkles in my tutu. I'm wearing an orange leotard today, a color I'm not fond of. I'll be stuck with this outfit for a week until the professor sews a new one for me, but I'm not too concerned. I'll have a friend to play with, so I can overlook pretty much everything else.

Her features are coming to life. She looks a lot like me. The professor has given us both large eyes – larger than our upsettingly small hands. They're sky blue, with a white sparkle in the corner. My nose isn't as petite as hers, but it doesn't bother me. We're pretty in our own way. Her lips are pale, and she has a dimple in her right cheek. I press my fingers into my own cheeks, the plastic unyielding. I've always wanted dimples. Maybe I can ask the professor.

Her hair remains ruffled, hanging limply by her waist. It compliments her black corset, black skirt, and black boots. Wow. She sure does go for a lot of black.

I practice my jetés. It's freeing to leap, but not all of my joints are as flexible as they could be. I have a natural point, but my hips don't allow my leg to extend as far as the humans' on TV. They squeak every time I try. Ballerinas shouldn't squeak.

The professor leans back in his chair and crosses his arms. He beams at the goth doll staring vacantly into his eyes. "There. She's done! What do you think, Ella?"

I can't stop my chest from puffing out with excitement. I suck on my lips to contain the goofy smile spreading across my face and walk towards my new friend. I stroke her hand, waiting for a response. When nothing happens, I take a step back.

The professor grins, his glasses falling to the tip of his nose. "Don't worry, my dear, I haven't activated her yet. Should I make any other changes before I do?"

I tilt my head to the side, examining my new friend. "No, I like her. She's different than me, though. Why is she broken?"

The professor scratches his pointed chin and runs a finger through her hair. "She used to harm herself..." His tone is soft, as always, but there's a hitch in his voice. He gently taps her wrist, his nostrils flaring. "I didn't paint the scars. She doesn't need a reminder."

I glance at my knees where the hinges poke through my stockings. Should I voice the question that blares in my mind? "Wh...what did you keep me from remembering?"

He tears his gaze from the goth doll and looks at me, expressionless. I struggle reading the professor. His voice is often monotone, and he has an impressive poker face. "Why would I tell you what I'm keeping from you, if I'm keeping it from you?" He smirks and cups his hands together, indicating for me to get on. I step into his hands, his flesh bouncy. He travels slowly because he knows fast motions make me queasy. He lowers me into the treasure chest, beautifully decorated to look like my old bedroom, apparently. He leans in and gives me a kiss on the head, avoiding my carefully pinned bun. "So long as you can dance, Ella, you needn't worry about the past."