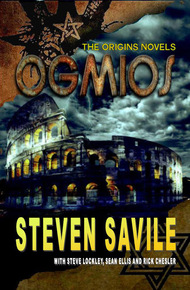 In 2011 Steven Savile's novel Silver was a smash hit, reaching #2 on Amazon and selling over 75,000 copies worldwide. Now the team return in these three breathtaking adventures in one omnibus edition - 3 novels in 1!

With the discovery of the long lost Seal of Solomon--real or not—Ogmios Team members Konstantin and Orla find themselves in Jerusalem and Palestine fighting for their lives in a desperate race to stop all hell breaking lose. They don't know who they can trust. They don't know which way to turn next. All they know is they have to find the Seal while diverting the detonation of a dirty bomb at one of Jerusalem's most holy sites.

During the basking summer heat a university-based archaeology team uncovers an ancient box bearing the image of Baphomet. Could this box-a crude yet sophisticated machine centuries ahead of its time-be a vital link to discovering the true nature of the Knights Templar’s relationship to the horned devil?

A search for the legendary sword of Julius Caesar draws the Ogmios Team into a web of intrigue, betrayal and violence that threatens the stability of the Realm, and the future of the entire planet…. The race for the sword and search for the truth behind the plot will take both Frost and Khavin across Europe, into the murky place where legends meet history, and to the very brink Armageddon.

"I loved the first book in the series, Silver, so getting the chance to include the omnibus edition of Solomon's Seal, Wargod, and Lucifer's Hammer was a no-brainer. Savile's action is always top-notch."

Kasim placed the battered and twisted ring down on the table.

The dealer took it and held it up to the light.

He was sure that it was gold and it was certainly old. It was not the first time he had been able to find work on a dig in the edge of the desert and managed to pocket one of the finds. Sometimes he could sell them, sometimes he couldn’t. He wasn’t paid enough to worry about the legalities of what he was doing. He wasn’t a fool though, he knew the dealer wouldn’t give him anywhere near a fair price for the ring, but money was money and it came with no questions asked.

The dealer turned the ring over and over in his fingers; weighing it, judging it. It was obvious that it had been in the ground for a long time, but what constituted a long time? More than five hundred years? More than one thousand? Two thousand? Considering how long it had been down there it was in decent shape though it had been badly dented and buckled, it was still clearly a ring. And in Kasim’s mind a ring made of gold that was that old meant that rare, and rare meant dollars.

"What will you give me? Dollar price?" Kasim asked while the dealer pondered his offer. The dealer raised an eyebrow. In that question he learned more about Kasim than the scruffy little labourer could possibly have guessed: the desperate usually asked for payment in local currency—cold hard cash they could take to the bars and bookies and blow through fast. Instant gratification. Anyone asking for dollars had a plan that didn’t involve sticking around long term. The dollar guys were setting money aside for something special.

The dealer made a face. It was all part of the act. He was negotiating. He pursed his lips and shook his head slightly. "Fifty," he said.

Kasim reached out to take it back. "Fifty? You insult me, and you insult my mother and the camel that gave birth to her," Kasim said, "Five hundred."

"It is old. Very. Old means valuable and you know it. And it has the Star of David. There are enough rich Jews who would pay you a king’s ransom for an artefact like this. Five hundred."