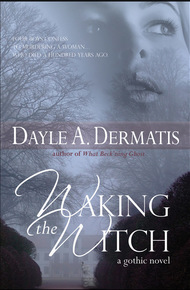 Waking the Witch by Dayle A. Dermatis

What happens when four boys confess to the murder of a woman who died a hundred years ago…?

The violent encounter Rowan Everly survived in college jolted awake her psychic power to see past images while holding a related object. At the behest of a friend, she comes to the privileged prep school town of Millburn, New York, to investigate the current rape and murder, and hopefully clear her friend's son's name.

Rowan's not sure she's up to the task. Her deeply ingrained mistrust of men makes her question where her loyalties lie. The deeper she investigates, the less anything makes sense. The boys seem truly horrified by what happened—almost as if they hadn't had control over it.

Her initial encounter with sheriff Toby Candusco isn't pleasant for either of them. But his calm support of her, and his unwavering desire to see justice done, gives her the strength to not only face her fears, but to reexamine the core beliefs that shape who she is.

Only then can she face and destroy the real menace…and save everyone around her.

Dayle A. Dermatis has appeared in eight volumes of Fiction River and one volume of Fiction River Presents. In addition to her story in Recycled Pulp, which involved elements of magic and romance, I asked her to include Waking the Witch, a gothic mystery novel with some paranormal elements and a light romance. Dayle weaves magic and romance into everything she does, writing or no, and her zest for life shines through in her writing. – Allyson Longueira

THE YOUNG WOMAN had ceased to struggle. Her eyes, deep blue like a winter evening, stared sightlessly upward as the next man moved over her to violate her still body. Despite her lack of movement, two of the others pinned her arms against the frost-hard ground, just in case. She had fought like a wildcat earlier, and one of the men sported a puffy, purpling bruise around his eye, courtesy of her fist.

He had answered in kind, breaking her nose in the process with a sickening crunch. She had cried out once, then almost choked on her breath and the flow of blood, black instead of red in the moonlight, sluggish in the late autumn chill.

Now even her whimpers had died away.

The man finished and, with a grunt, pulled away from her. Her skirt, roughly hiked above her waist, tore when he stepped on it.

He froze. "Why isn't she moving?" he demanded.

The others stared. "Shit," one of them barked. He nudged the girl with the toe of his boot. Her head flopped sideways with a rustle as the fall leaves caught in her tangled, dirty-blond hair.

"It doesn't matter—no one will miss her," said another. His breath, like all of theirs, stank of alcohol. "And if they did, who'd believe some whore over us?"

The first man was slowly buckling his belt. It was somehow obvious that he was trying to figure out if she'd been dead while he was raping her. Then he shook his head, turned, and followed his friends toward the path that led out of the woods.

Ghost-wisps of clouds began moving over the full moon. The wide blank eyes didn't see, and then it was dark.

Rowan jerked back, yanking her hands from beneath the crisp brown leaves. She rose and staggered a few steps to the nearest tree, then knelt behind it and threw up. When she was done, she still crouched there, gasping and spitting, unable to chase from her mind the vision of brutality.

Not just a vision. It might be a vision to her now, but it was something that had happened recently. A girl was dead.

Rowan moved to a sitting position, her back against the tree and her jean-clad legs folded against her body. She wrapped her arms around her knees and stared at the scuffle of leaves surrounded by the flapping remains of bright yellow police tape. If she squinted, she thought she could make out the imprint of the body that had lain there. But no—she closed her eyes momentarily, with a shudder—that wasn't possible. In the past few days, the wind had looped its customary trail through the trees, and the area contained a healthy scattering of newly dropped leaves in hues of scarlet and fire and rust.

"Stop it," Rowan said aloud. She fished in the pocket of her leather bomber jacket until she found the plastic bottle. She swallowed the pills dry, ignoring the heaving of her stomach, and shoved the bottle back into her pocket as she stood.

But still she didn't leave. She stood, staring at the leaves and the tape, ignoring the wisps of hair that the autumn wind dislodged and blew across her stinging cheeks.

She wished she hadn't needed to come here. It had been the best chance of finding a clue, of learning what had happened. As it turned out, she hadn't seen anything useful; all the men's faces had been shrouded in shadows, their clothing indistinct in the night's dark, their voices not something she was any good at remembering again. But even if she had seen some incriminating detail, the best she could have done was to try and prove it, or give the sheriff a tip on which to build solid facts and information. What she saw wouldn't be enough to convict anyone.

Rowan closed her eyes. Sometimes she hated her ability. At the very least she'd managed to keep it secret from everyone except a few close friends, knowing that otherwise she'd be ostracized as a loony or hounded by every desperate believer.

She started to walk away…then turned and looked back one last time. If she had in fact seen something useful, she wasn't sure she could have refused to help.