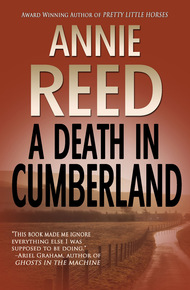 A Death in Cumberland by Annie Reed

The first murder investigation of Sheriff Jill Jordan's career might be her last.

The good old boys system still holds strong in rural Cumberland, Nevada. Sheriff Jill Jordon's fought against that system her entire life. Engaged in a hard-fought election against her own chief deputy, she finds herself faced with the first murder in Cumberland in over a decade.

The good old boys aren't above using the murder to their own advantage. Especially when the son of one of their own is implicated in the crime.

Annie Reed has appeared in eleven volumes of Fiction River and is one of our most frequent Fiction River contributors. In addition to her story in Recycled Pulp, I asked her to include A Death in Cumberland, another moody police procedural. Annie is a brilliant writer and her crime stories draw the reader in and keep them hooked until the final page. – Allyson Longueira

Someone sat down around the corner of the counter while Jill was scanning the local section, looking for anything of interest. She lowered the paper.

"He's back again," Hal Taylor said without preamble. "Can't you do something about that?"

Jill didn't have to ask who was back or where he was. She'd had this conversation with Hal Taylor too many times to count.

The "he" was Jeremiah Corbitt, seventy years old and one of Cumberland's crankiest senior citizens. Jeremiah was convinced that Hal, owner of Happy Hal's Cumberland Dodge, cheated him on a car repair job. Most people would have written a few letters, maybe filed a complaint, and left it at that. Jeremiah Corbitt wasn't most people. When the letters didn't work, Jeremiah decided to stage his own one-man protest by picketing Hal's business.

In the grand scheme of things, a one-man picket line was little more than an annoyance. Except a persistent old man with a picket sign didn't make Happy Hal very happy, and an annoyed Hal Taylor was a thorn in Jill's side that she didn't need at seven-thirty in the morning.

Hal was the closest thing Cumberland had to a celebrity. He'd turned the one used-car lot he'd inherited from his father into four new- and used-car dealerships. His goofy television commercials featuring Happy Hal and his sidekick, Hal's general manager Stan "Sad Sack" Schmidt, aired on the local television channels in both Cumberland and Reno more often than reality shows. Hal Taylor drew a lot of business to the area, and that made every business owner in Cumberland a Happy Hal fan.

Hal had been a senior in Cumberland High when Jill was a freshman, and the intervening decades had been kind to him. He hadn't been conventionally handsome back then, but he'd had more than enough charm to make up for it. These days the lines around his mouth and creasing his forehead merely enhanced his rough features. His skin was a healthy tan year round. His black hair had gone salt and pepper in the way that made men look distinguished and women just look old. His shoulders were still broad like they'd been when he played football, and he hadn't let the rest of his muscles go to fat like so many former athletes did. He had a smile he could turn on at a moment's notice, and unlike many people who smiled for a living, Hal's smile reached and warmed his dark eyes. It was a good trait not only for a car salesman but for a politician, which probably explained why Hal was in his fourth term as County Commissioner.

In Cumberland, Hal Taylor had clout, and he wasn't above using it.

"Is Jeremiah on your property?" Jill asked Hal without closing the paper.

"He's at the Shell station across the street. Greg's not about to kick him off. He's got a soft spot for the old coot. I don't. He's not good for business."

Each time Hal complained, Jill sent out a deputy to roust Jeremiah, and each time Jeremiah promised to take his complaints to an attorney. Then a week or so later he'd show up again with another sign. He was smart enough never to set foot on Hal's property, so Jill couldn't arrest him for trespassing. Unfortunately for Hal, the business owners where Jeremiah chose to picket, like Greg Seaborn who owned the Shell station across the street from Hal's Dodge dealership, saw him as harmless and let him wave his homemade picket signs at passing motorists to his heart's content.

"What, exactly, do you want me to do?" Jill asked. "He's not on your property, Greg's not going to kick him off his. Why can't you just fix his problem and send him away happy?"

Hal looked at her like she was a particularly disgusting form of insect life.

"Because we didn't cause his problem. I'm not about to start fixing—for free, mind you—every knock and ping in every ten-year-old Dodge in this valley, which is what will happen if I fix his car out of the goodness of my heart."

Tina interrupted them with Jill's breakfast. She filled Hal's coffee cup from the pot she carried in one hand.

"You having anything to eat this morning, Hal?" she asked.

Jill noticed that Tina smiled a little more for Hal, even put a little flirtatious lilt in her voice. Hal had that effect on women.

"No thanks, babe," Hal said, smiling back like he hadn't been annoyed just a moment ago. "Just coffee."

"If you change your mind, just let me know." Tina stuck her pad back in the deep front pocket of her apron and walked out into the diner proper, circulating among the tables and refilling coffee cups as she went.

"Cory would have done something," Hal said as he stirred a packet of sugar into his coffee. He didn't look at Jill. "So would Oren."

So far Hal hadn't endorsed Jill or Oren even though everyone knew Hal and Oren were long-time buddies. The whole campaign, outside of a few billboards and newspaper ads, had been rather low key. Apparently Hal thought he could manipulate Jill by threatening to throw his support behind her opponent.

"You sure you want to go there, Hal?" she said. "Over something like this?"

Jill had seen Hal throw his clout around during County Commission meetings, and she'd heard gossip that he'd used his influence and resources in much less savory ways as well. The gossip stopped short of actually accusing Hal of illegal activities, but Jill never forgot that Happy Hal had a darker side he didn't let the general public see.

"I just want to drive to work and not see him out in front of my business with those signs of his. It's bad for business, and it's bad for the town's image. Why can't you see that?"

Jill put her fork down on her plate. "Get a restraining order against him. He violates it, I'll arrest him."

"That would take too long."

It would also give Jeremiah his day in court, and the local press would probably be there. Jeremiah with another protest sign didn't even merit a page five mention in the newspaper anymore, but Jeremiah going up against Happy Hal in court might even entice a news crew from Reno if they were having a slow news day.

"Look." Hal rubbed at his forehead. "Why don't you go talk to him? Your deputies go out and he gets his back up. You might have more luck with him. You're good with people, Jill, you always have been. Even when we were kids, you seemed to know how to connect with people."

Now he was flattering her. Pulling out all the big guns. It never ceased to amaze her how in a town the size of Cumberland, small things became big things that had to be handled Right Now. Jeremiah Corbitt was clearly Hal Taylor's current big thing. Cory had warned Jill she'd have to play politics in this job. One of the people she had to play politics with was Hal Taylor. That didn't mean she had to like it.

Jill sighed and glanced at the neon-lit Coca-Cola clock on the back wall of the diner. The angle where she was sitting made it difficult to see precisely what time it was, but Jill could tell close enough. She didn't want to look at her watch; that was too obvious. A mound of paperwork awaited her at her office, including the departmental budget report. She'd have just enough time to go talk to Jeremiah if she left soon.

"I'll go this one time," she said. "Next time, get a restraining order or I'm not sending anyone. Are we clear on that?"

Hal smiled, the same big grin he normally reserved for his television commercials. He thought he'd won, and maybe he had. Jill didn't feel like she'd lost, though. Keeping the peace was her job. Talking to an angry old man was just one small part of it.

"Thanks, babe," Hal said. He finished the rest of his coffee, put a couple of dollar bills next to the empty cup, and stood up.

"Hal?" When he looked at her, Jill said, "Don't call me that. I prefer my name. I think you'll find most women do."

The look on his face said he didn't believe it. "You're okay, Jill." He gave her a mock salute with one finger and left the diner.

Great. She had the stamp of approval from Hal Taylor. Her day just couldn't get any better than that.