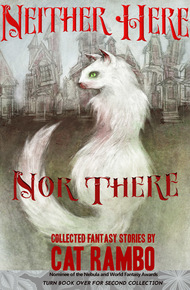 For more about her, as well as links to her fiction and her popular online school, The Rambo Academy for Wayward Writers, see her website.

Neither Here Nor There by Cat Rambo

Neither Here Nor There showcases fantasy stories featuring our own world on one side and secondary world fantasy on the other. Rambo, a short story master, amuses and delights at times, astonishes and wrings one's heart at others. Several stories are original to the volume, such as the first in a new urban fantasy series from Rambo, "The Wizards of West Seattle."

Cat Rambo has appeared in two volumes of Fiction River. In addition to her story in Recycled Pulp, I asked her to include Neither Here Nor There, a double collection of alt-world and real world fantasy stories. Cat's stories are innovative, entertaining and guaranteed to distract from all the ails you in real life. – Allyson Longueira

Section from "The Wizards of West Seattle"

Across Lake Union, the technomancers ruled most of the hills of Redmond and Sammammish, but there were scatterings of other beings, mostly in the settlements of Villa Encantada and Friendly Village. The south was a crazyquilt of varied territories, but wizards ruled West Seattle.

Penny imparted more in bits and pieces during the walks. How every named building had its patron spirit, who could be called on. How (but not why) each Wizard was named for a major street and what happened at the junctions where those streets met. How (and again not why) the Pretender of Fauntleroy was always to be called that and never by name. How to tell which houses were ghost traps, catching spirits through odd angles of fencing, and why the Little Free Libraries were never to be tampered with. Where the shuttle ferrying souls to downtown Seattle stopped and how to refuse the driver if they pulled up. The nature of the Flimsies, zones created by poor construction and foot traffic (every fast food place seemed to create one), and how they hampered thought. How to taste the different flavors of magic, the green strength of communal gardens and the resiny tang of ancient trees, and concrete and sparks edge of Hiawatha Park that she said was the taste of its creator, Olmsted, an early American wizard who'd built parks all over the country.

As Albert listened, a new world formed for him, one built of hidden things and secret forces and mysteries. It thrilled his geeky heart to the core, and he knew that he wanted to be a wizard and would give anything for it.