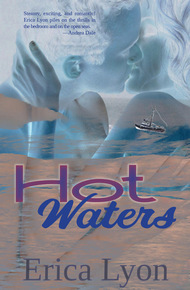 As Christy Evans she wrote the popular Lady Plumber Mystery series, and Christy Fifield writes the Haunted Gift Shop series. Christy is launching a new Spy Girls series soon with Tsunami Ridge Publishing (www.TsunamiRidge.com). Christy can be found at ChristyMystery.com and YorkWriters.com. She also hangs out on Facebook both in her mystery group, Christy Mystery, and under the name Christina York.

Action fills the pages of HOT WATERS, a combination of steamy romance and adventure on the high seas. Matt Carpenter and his wife Sara run for their lives aboard Excelsior, dodging murderous smugglers and the implacable ocean.

Christy Fifield (one of Erica Lyon's alter egos) has appeared in two volumes of Fiction River. In addition to her Christy Fifield story in Recycled Pulp, I asked her to include Hot Waters, because sometimes you need a steamy seaworthy adventure story to sweep you away from reality. – Allyson Longueira

ALEKSANDR REZHNENKO STOOD on the deck of the trawler, his hands clasped behind his back. The butt of his pistol rested in the vee formed by his arms, and his feet rode the rolling deck with ease. He could smell the rank odor of the open holds. They had thrown over the spoiled fish, watching as the great white devoured the stinking mass, and the holds still stood open. They would have to close them soon, against the coming storm.

Martin Green clung to the rail, a few feet in front of Rezhnenko, sweat running down his face. Green's fishing boat was tied up alongside the trawler. His first mate waited at the rail of his ship, straining to hear the exchange. Rezhnenko stared from one to the other, weighing his options. He knew the Americans had tried to cheat him. It was only a question of who would take the blame.

"It was a mistake, Captain. I apologize. We were in a hurry; afraid we would miss our meeting. The rest of the merchandise was just misplaced."

Rezhnenko stared at him until Green dropped his eyes to the briefcase at his feet. Krushkin and the Petrov brothers, the trawler crew, had retreated to the wheelhouse where they were carefully avoiding any contact with either man. This was none of their affair, and they clearly had no desire to get between their captain and the Americans.

The bay was quiet, and the rain forest of the Olympic Peninsula was an impenetrable blackness that surrounded them. Rezhnenko continued staring, watching Green sweat. He felt the power he held over the man, and the anxious eyes of Green's first mate followed his every move.

"And if I had taken your word, and not checked it? What then?"

Green glanced up, his expression a mixture of hope and dread. "You would get your merchandise. I swear it."

"How?" The single harsh syllable made Green jump as though he had been lashed, knocking the briefcase off the deck, onto the boat below. The deck rolled as a swell moved across the bay, and he clutched at the rail.

"I would do whatever was necessary." Green shrugged elaborately, but the gesture did not disguise the fear-sweat that coursed off his body.

"I wonder if you would." Rezhnenko's voice carried a note of curiosity. But he didn't have the time to indulge it.

He stepped toward Green and clapped a meaty hand on his shoulder. "We have done much business together over the years, you and I. We have made a lot of money."

Green's eyes lit with relief at the trace of affection in Rezhnenko's voice.

With one swift, sure motion, Rezhnenko brought the gun from behind his back and fired a single shot into the American's temple. Green didn't even have time to register surprise before the life left his eyes.