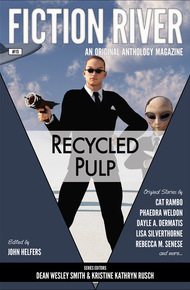 The old becomes new again as fifteen talented authors go back to the lurid pulp titles of yesteryear through today's rich, nuanced storytelling. Enjoy original tales featuring rebel angels fighting a heavenly enforcement squad, a cop whose life might depend on ordering the right deli sandwich, and a wizard who has just three days to pay off the loan on his tower or lose his very soul. Whatever your taste in stories, Recycled Pulp is sure to have something that will amaze, surprise, and delight you.

Table of Contents
"The Revolt of the Philosophers of Fomalhaut" by Phaedra Weldon
"Marvelous Contrivances of the Heart" by Cat Rambo
"The Flower of the Tabernacle" by Annie Reed
"Lost in the Tarnished Cube" by Thomas K. Carpenter
"Crypt of the Metal Ghouls" by Angela Penrose
"The Imperfect Otter Empire" by Dayle A. Dermatis
"The Unknowable Mansion of the Night" by Sandra M. Odell
"The Portal of Wrong Love" by Dean Wesley Smith
"Sacred Poet from the Future" by Kelly Cairo
"Swamp of the Prehistoric Clan" by Christy Fifield
"The Magnificent Citadel" by Rebecca M. Senese
"Night of the Dancing Champions" by Kristine Kathryn Rusch
"The Delicatessen from Beyond the Monolith" by Lisa Silverthorne
"Prism of the Crab Gods" by Kelly Washington
"The Gleaming Crater" by Thea Hutcheson

I've published 22 volumes of Fiction River to date, and although publishers—like parents—aren't supposed to have favorites, Recycled Pulp is certainly on of the most creative. Editor John Helfers gave each author a list of three pulp fiction titles from which to choose and write a story for consideration. What these authors came up with from those titles amounted to one incredible volume of short fiction. – Allyson Longueira

Everything Old is New Again

Welcome to Recycled Pulp, the fifteenth regular volume of Fiction River, the anthology magazine series created by the fertile minds of Kristine Kathryn Rusch and Dean Wesley Smith. I'm your volume host and editor John Helfers, here to take you on a little trip down memory lane…back to the glorious heyday of the pulp magazines.

Okay, before we go any further, I have a confession to make—I have absolutely no real historical memories of the pulp magazines, as that entire era happened well before I was born. I have seen plenty of those yellowed, dog-eared digests in my time, however, whether I was searching through them to find just the right story for many Martin H. Greenberg anthologies, or simply reading them for my own pleasure (it was very easy to get sidetracked while doing the former).

The heyday of the pulps (so-called because the magazines were printed on rough, cheap paper, often with untrimmed edges) ran from the late 19th to the middle of the 20th century. Beginning in 1896 with a retooled version of Argosy Magazine, edited and printed by Frank Munsey as an alternative to the twenty-five cent "slick" magazines of the time, his version, filled with exciting, action-packed stories, was an immediate hit, and by 1903 was selling 500,000 copies a month.

And what stories they told! Readers thrilled to the fantasy adventures of Khlit the Cossack, a wandering swordsman, in tales such as "The Masterpiece of Death" and "The Mighty Manslayer." And of course, little needs to be said about Khlit's much more famous sword-and-sorcery competition, Conan the Barbarian.

Or if thrilling superhero noir stories were more your speed, you had The Avenger, who began his fight against the forces of evil in "Justice, Inc." and went on to star in such adventures as "The Frosted Death" and "Cargo of Doom." There was also the more famous Shadow, who knew what evil lurked in the hearts of men, and often shot them down in stories such as "Death from Nowhere" and "The Creeping Death" and later starred in full-length novels such as The Shadow Strikes. Not to mention The Spider, called "The Master of Men," who fought crime with blazing .45s in such novel-length adventures as "Wings of the Black Death" and "Citadel of Hell."

Or, perhaps you prefer rockets and ray guns; no problem, the pulps had you covered there, too. From Buck Rogers to Captain Future, Doc Savage to John Carter of Mars, the pulps could take a populace hungry for adventures through space and time to strange planets populated by unearthly creatures, beautiful princesses, and hostile aliens.

And these were just the tip of the pulp juggernaut. Just about every genre (and subgenre) was covered; airplane stories, combat stories, sailing stories, railroad stories, westerns, high adventure, sexy (or as sexy as it got in the 1920s and '30s) detective stories, the list goes on and on…

But where was I? Oh yes, the title of this volume is Recycled Pulp, and the concept stemmed from the previous year's anthology workshop at WMG Publishing, Kris and Dean's business headquarters. There, in the shadows, a group of editors joined together to plot literary domination… Er, sorry—once you get into the pulp style, it can be difficult to get back out.

Anyway, Dean is a huge fan of the pulps, and has one of the largest complete collections of many of the various magazines in existence. The main room where we hold the workshop is also decorated with movie posters and blow-ups of covers of old magazines like The Spider, complete with lurid story titles such as "The Corpse Collectors" and "Empire of Doom."

One day, I was admiring the covers and discussing with Dean how those magazines often got filled, often by the editors commissioning stories on the basis of a title alone that would be assigned to a writer to complete. I suggested we should do like the pulp editors did back in the old days, give the attending authors a title, and let them come up with the story to suit it.

Fast-forward to late 2013, and it was time to come up with my theme for the volume you're holding right now. The idea of having writers write stories to order still appealed to me, but I was looking for something more. That's when the idea of 'recycling' pulp tropes hit me.

The concept was simple: I would liberate old pulp titles and reassign them to the current crowd of authors. However, the twist would be that the new story could not contain any pulp elements. They could write in any other genre they wished, but no pulp tropes.

However, my lovely and intelligent spouse Kerrie Hughes (editor of Fiction River titles Hex in the City, Alchemy & Steam, and Haunted) suggested I take it a step further and create all new pulp short story titles for the writers to choose from. And with the help of the Pulp Sci Fi Title-O-Tron at www.thrilling-tales.webomator.com, I soon had more than enough titles to use.

However, I didn't want the writers picking which ones they got to write; after all, the pulp writers of yesteryear often didn't get a choice, so why should these good folks (we editors are a heartless, devious lot, after all)? But I wasn't that heartless as to give them just one title. Instead, I had them choose three numbers from 1 to 250, and they got the titles that corresponded to their selections. They had to pick one of those three and give me a story, again, recycling the title of the story into any other genre.

And boy, did they! The selected writers in this volume more than rose to the challenge, and the results are more diverse than I ever expected. Included within these pages are several varieties of fantasy; light by Tom Carpenter, urban by Rebecca M. Senese, Phaedra Weldon, and Lisa Silverthorne, and darkly epic by Thea Hutcheson. Science fiction is well represented too, from a bleak, dystopian tale with a hint of hope by Sandra Odell to a post-apocalyptic adventure by Angela Penrose to a time-traveling story by Kelly Cairo. Then there is what I call the more mainstream stories, including two touching tales about older folks from Christy Fifield and Kristine Kathryn Rusch, as well as a quietly devastating mystery by Annie Reed. And last but not least, there are the unclassifiable stories, which include a Twilight Zone-esque tale by Cat Rambo, a charming story of purpose lost and found with the help of some charming animals at the zoo by Dayle A. Dermatis, one of Dean Wesley Smith's always fun superhero stories featuring Poker Boy, and one of the most heartbreaking stories I have ever read about a boy and his pets by Kelly Washington.

But I've rambled on long enough here, and don't wish to spoil the fun I hope you have enjoying the clever, touching, wonderful tales these assembled authors came up with…that all started with recycling pulp.