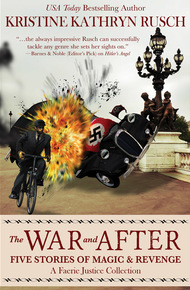 The War and After by Kristine Kathryn Rusch

The entire world convulsed in the middle of the 20th century. Everything changed—even the magical universe. From faerie to mages, from wizards to war criminals, the Second World War touched every single life. The War and After explores the effect of the Second World War on the magical world in five different stories spanning thirty years—from the 1920s as the war glimmered in the distance to the 1950s when it had just barely passed. Included are "Corpse Vision," "Dark Corners," "Subtle Interpretations," "Judgment," and "The Thrill of the Hunt."

Kristine Kathryn Rusch is one of Fiction River's series editors, and she also edits some of the volumes and writes for most of them. I asked her for The War and After because like her story in Recycled Pulp, this short story collection also centers around World War II, although this time in the historical fantasy genre. These five stories will make you rethink the horrific events of that time from a compelling new perspective. – Allyson Longueira

War haunts me. I don't know why. I've written about war for my entire career. From the books of the Fey to Hitler's Angel, I have examined war without being any clearer about what it means to me.

After I write this introduction, I'm starting a novella (short novel) called Show Trial, set during the Nuremberg trials. I've been planning this piece for a long time. It made itself known as I was writing two of the stories in this book. I needed to review those stories, so I figured now was the time to put them in a collection.

I have a lot of World War II stories. I'll collect more of them as time goes on. Most of them aren't stories that happen during the war. Most of them are about the impending war or the results of the war. Only one story in this volume is set during the fighting. Three of the others happen after the war, and one foreshadows the nightmares to come.

In this collection, I've done something I don't normally do: I've put the stories in chronological order. Not the order in which I wrote them. (If that was the case, then "Dark Corners" would come first.) The chronology here is history's chronology.

"Corpse Vision" comes first. Set in Paris in the 1920s, it hints at the horrors ahead. "Dark Corners," also set in Paris but this time in 1944, comes next. Both stories come from a trip I took to Paris in 2001. Laura Resnick and I went into the catacombs beneath the city, and learned that the resistance used that as one of their hiding places. I was both uncomfortable and intrigued, emotions that always lead me to research and then to storytelling.

"Subtle Interpretations" is the other Paris story of the volume, but this time, Paris is accidental: the language division of the U.S. Army, working for the Nuremberg Trials after the war, actually recruited out of the Paris International Telephone Exchange. I set this story in Paris because I had no real choice.

"Judgment" takes place in Nuremberg itself during the trials in 1945. I call these stories "practice" stories, not because I plan to rewrite them, but because they're messages from my subconscious, exploring areas that might or might not be in a larger work. Both stories stand alone, and neither will be part of the larger work—exactly, anyway—although bits and pieces will factor in.

Finally, "The Thrill of the Hunt" takes place in the 1950s. Various organizations did hunt escaped Nazis and, it's rumored, some organizations actually murdered the Nazis they found. That fact served as the impetus for the piece.

The stories here are dark—how can they not be?—but they're also cathartic, at least for me. They explore a dark period of human history, one we're lucky to have survived.