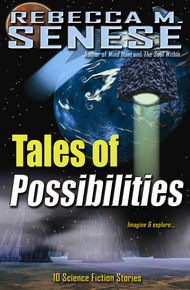 In this ten story volume of science fiction stories explore reawakening after a murder, changing faces and changing bodies, losing your Self, chasing a fugitive and smuggling yourself, and discover what happens when you forget to shoot the dog.

Rebecca Senese has appeared in three volumes of Fiction River. In addition to her story in Recycled Pulp, which in and of itself is about escaping reality—with a dark twist, I asked her to include Tales of Possibilities, a ten-story science fiction collection that will surely transport you to wherever it is you want to go. – Allyson Longueira

BROTHERS UNDER THE SKIN

Occasionally she would slip and call him "David."

At first it confused him; his name was Tommy. He'd learned that quickly; he was a bright boy. She called him Tommy most of the time but occasionally she would slip and the word "David" would come out and when he looked confused, she would become angry. But her anger dissolved quickly into guilty tears and she would bend down to hug him so tight he could barely breathe.

Once when he was six he asked who David was. Daddy got angry, a pinched look crossing his face. He slammed the newsreader shut and left the dining room without a word. Mommy clenched her coffee cup and her teeth. When he looked at her she snapped at him to finish his breakfast.

Her angry tone upset him, made him want to cry but he was a big boy now and big boys didn't cry. With a sniff, he bent over his cereal.

He never asked about David again.

The teasing started when he went to junior high school.

Gregory Martin was the first one. All fat muscle over a bullish temperament, he ambled over at lunch.

When he started to laugh, all the other kids joined in.

Shame reddened Tommy's cheeks even through his confusion. Clone? What was he talking about? Then Tommy recalled his mother's face, flushed with shame and residual pain.

He stayed after school that night to access the library. He could have used his home terminal but the school's was generic and although he had to use his school ident card, it didn't prove he used the computer. Everybody traded ident cards in school. It was a way to access more than you were supposed to. The school knew about it but couldn't stop it.

One of his friends had shown him how to access government records just a few days ago. With a few tricks, you could slip through the defenses and look at whatever you wanted. Tommy hunched over the hand reader and steered along.

He knew he'd been born at Mercy Memorial Hospital. Finding the hospital didn't take very long but he had to wade through the current admissions before he could get through to archives. There now. His tongue pressed against the top of his teeth. Birth records, finally.

Scrolling back took a long time, but he didn't want to miss it. As it was, he almost did.

Cross reference? What was that? He clicked on the reference and waited.

A moment later a file sprang open, including a picture. Tommy stared at his own face. His borrowed face. He stared for a full twenty minutes before he could look at the name.

He copied the file without reading anymore. He couldn't read anymore right now. God it was late, mom would kill him. His hands shook as he stuffed the bubble-mem into his knapsack.

His mind stayed blank on the speedtrain ride home.

"You look a little pale, Tommy. Are you all right?" Mom said when he walked into the living room.

"I'm just tired. I think I'll lie down before dinner."

He turned away to avoid her reply and retreated to his bedroom.

Dimming the window shield, Tommy laid down on the bed. He felt heavy, as though he could sink into his mattress and break through the floor. Then he would sink through the rest of the house and into the ground until he reached the hot, molten core of the earth.

He was a clone. The thought created a tiny ripple on the surface of his mind. He could feel it moving outward, gaining strength. Soon it would become a tidal wave, growing to engulf him. He would drown in himself.

His fingers itched to open the knapsack but he didn't trust himself. Not yet.

Mom's voice drifted up the stairwell, calling him to dinner. He knew if he didn't answer she'd use the com system even though she hated it.

Sure enough the speaker by the door crackled. She could never get it to work right.

"Tommy? Come down for dinner." Her voice dissolved in a burst of static.

More static. "Do you feel okay?"

He didn't reply. What could he say? He wasn't quite sure what he felt.

A few minutes later she knocked on the door and used her override to open it.

"Windows, forty percent light," she said. The darkness slowly lightened into gloom. He could see her body silhouetted against the doorway. He wanted to cry out to her, ask her before he had to see it for himself. Ask her just once to be honest.

Then she moved and the moment was lost.

"Do you feel sick?" she asked. She moved to stand by the bed and put her hand on his forehead. Her skin was cool and soft.

"You do feel a little hot," she said. "You keep resting. I'll bring you up some soup."

Her hand stroked off his forehead and ruffled his bangs. As her fingers slipped away, he bit his lip to stop the tears. His mother reached the door and without turning back, called, "Windows dark."

If she turned as the door closed, he didn't see it as the light slowly faded to black.