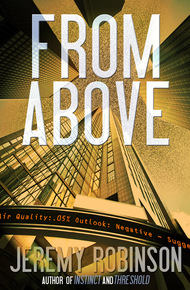 Jeremy Robinson is the bestselling author of more than thirty novels and novellas including Island 731, Secondworld, and the Jack Sigler series including Pulse, Instinct, Threshold and Ragnarok. Robinson is also known as the #1 Amazon.com horror writer, Jeremy Bishop, author of The Sentinel, The Raven and the controversial novel, Torment. His novels have been translated into eleven languages. He lives in New Hampshire with his wife and three children.

From Above by Jeremy Robinson

Far in the future, the Earth is surrounded by a half-mile thick layer of space junk, some of it trash, some of it giant advertising billboards, some of it space-winni vacationers. But Priest, a sexist narcotics detective for The Authority is more interested in the terrorist group whose strange new weapon took a pot shot at his city and atomized everything inside its target area--including his arm.

Priest finds himself partnered with the tough and sexy Rehna, a fellow Authority officer, and Gawyn, a brilliant little girl whose gruff attitude matches Priest's. The three of them track down the terrorists, and their weapon, while Priest looks to deliver his unique brand of justice and get compensation for not one, but two ruined Tac-suits.