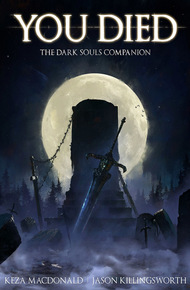 Jason Killingsworth is based in Dublin, Ireland, and manages Riot Games' EU Creative Studio. Previously he spent over a decade as a journalist and arts critic working across music, film and video games. His exploration and critique of the Souls series has appeared in Edge, Official Xbox Magazine UK, Official PlayStation Magazine UK, GamesMaster and Paste. He wrote the Edge magazine cover story that unveiled Dark Souls II, and is part of a mildly obsessive contingent of Dark Souls fans to have completed the game at Soul Level 1.

Over her 11-year career, Keza MacDonald's writing about video games has appeared on IGN, The Guardian, Eurogamer and just about every other publication that has every published words about virtual worlds. She is currently the editor of Kotaku UK, a website about video games and the vibrant culture that surrounds them. She wrote the first ever English-language reviews of both Dark Souls and its predecessor, Demon's Souls, and her enduring fascination with the series shows no signs of abating. Her upbringing in Edinburgh, Scotland, prepared her well for future explorations of Yarnham.

You Died: The Unofficial Dark Souls Companion by Keza MacDonald and Jason Killingsworth

You Died: The Dark Souls Companion – an entirely unofficial book about one of the most extraordinary video games ever conceived, Dark Souls, and the world's communal experience of playing it. The book's authors Keza MacDonald and Jason Killingsworth, two inexhaustibly enthusiastic long-time Souls devotees and games writers, spent well over a year talking to members of the Dark Souls community and gathering their stories from the muckiest depths of Blighttown to the highest reaches of the Duke's Archives.

Dark Souls is a fascinating anomaly in the world of video games, so challenging and so intriguingly opaque that even years after it was released, we're still puzzling out its secrets. It's made an indelible imprint on everyone who's played it. Every single person who's finished Dark Souls has been through the same harrowing, exhilarating journey, triumphed over the same near-impossible odds, and seen the words YOU DIED flash up on-screen approximately 10,000 times. It's a game that creates stories, little mini-narratives of unlikely triumph and fearful discovery.

This book is the story of Dark Souls and the slightly mad people who play it. It has three questions at its heart: where did Dark Souls come from, what makes it so special, and why are we all so obsessed with it? It'll dive deep into the lore of the game and the stories that its players have created around it. It will, we hope, be of interest to anyone who's tasted Dark Souls' mystery – whether you ever made it past Anor Londo or not.

"A history of FromSoftware's majestic, tough as nails action RPG that's at the same time interviews with key figures from playing & translating it, plus a bird's eye view of the entire phenomenon. Immensely satisfying." – Simon Carless

Excerpt from the You Died chapter "Good Grief: Trolls, Invaders and The Shadow Self":

"There's an overweight red phantom jogging up the steps of Sen's Fortress. He's decked out in the bulky armour set of Black Iron Tarkus. The helmet and chestpiece alone are sturdy enough to deflect an inbound asteroid, but Fat Tarkus also has a Black Iron Greatshield gripped in both hands, lending him the appearance of a human snowplow as he runs toward his destination. Fat Tarkus has not, however, invaded the world of Falcon679 to run. Or even to fight. He has come here to stand. His red aura, the signifier of all invading members of the Darkwraith covenant, glows continuously like a traffic light refusing to change.

Fat Tarkus has come to troll, in an amusingly literal fashion, playing the part of a fairy-tale bridge troll who will deny others passage. He settles into a doorway at the top of Sen's Fortress through which this world's host must eventually pass in order to reach the area's boss and progress to Anor Londo. But nobody's squeezing past Fat Tarkus, his raised greatshield pliant as the bank-vault doors you see in heist movies. And just like the criminal masterminds in those movies, Falcon679's first attempt at cracking the barrier involves munitions. He conjures a pyromancy flame, runs up to Tarkus and hurls it at him from point-blank range. The force of the explosion knocks Tarkus back slightly but does virtually no damage, being almost entirely absorbed by the shield. The only impact – a tiny chunk of lost stamina – regens in seconds.

Falcon679 changes tactics and hurls a throwing knife, which ricochets off the shield with a shrill ping. Then he tries arrows, unleashing a steady barrage, but they too prove useless. The spectre of a player from yet another world materialises briefly and dashes right through Tarkus, as if to mock the host's predicament. Having come to terms with the impotence of his bow and arrows, Falcon679 stands motionless, perhaps weighing his options. Then he kneels abruptly and uses the Black Separation Crystal, an item that, according to its menu description, "sends phantoms back to their homes, or sends you back to yours". Nothing. (Unfortunately for this desperate player, the crystal only banishes co-op summons from your world, not invaders.)

The nature of the stand-off has turned Falcon679's game of Dark Souls from an action-RPG into a Monkey Island-style adventure game. He finds himself in one of that genre's trademark cul-de-sacs, no idea how to progress, scrutinising every item in his inventory, wondering if there's a way in which one of them might be applied like lubricating oil to the present stalemate.

Out of ideas, he starts gesturing at Tarkus using the game's emote system. He waves like a chummy next-door neighbour. Then he beckons. He raises and lowers his shield with comical rapidity as if a bit of counter-tomfoolery might weaken the troll's resolve. Fat Tarkus is unimpressed. Fat Tarkus has all day. Falcon679 switches to two-handing his weapon and attacks. Nope. He regresses to failed tactics, letting fly another couple of throwing knives. Nope. He tries repeatedly to kick Tarkus backward out of the passage. Good luck with that.

Approximately 15 minutes into the encounter, Falcon679 starts jogging laps around the perimeter of the chamber, as if he's stuck in a prison yard and might as well exercise to pass the hours. At other times he stands idle, facing Fat Tarkus.

Skip forward to the 20-minute mark and Falcon679 has caught a fresh wind. He tries to hack and slash and huff and puff and blow Tarkus down. Dark Souls has taught this player, like it has the rest of us, that throwing yourself at any of the game's brick walls enough times will eventually allow you to punch through triumphantly like the Kool-Aid Man in those old television commercials. But absolutely nothing is working. He's just stuck. He has no more ideas.

Suddenly Falcon679 gets a private message, which reads, in a string of all-caps as chunky as the knight blocking his path: "YOU HAVE PASSED FAT TARKUS' TEST OF PATIENCE. PLEASE STAND BACK TO RECEIVE YOUR REWARD."

Back in game, Fat Tarkus proceeds to drop five units of humanity from his inventory in the doorway for Falcon679 to collect and finally, mercifully retreats from the doorway to let him pass. Moments later the player controlling Fat Tarkus gets a notification on his own console: "Falcon679 sent you a message." He opens this message from the person he's been stonewalling for the past 20 minutes. It reads simply, "hahaha beer spilt". As Tarkus triggers the Black Separation Crystal to return to his world, Falcon679 steps through the previously blocked doorway into the daylight outside and emotes a bow of the head as if to say, 'well trolled, sir'."