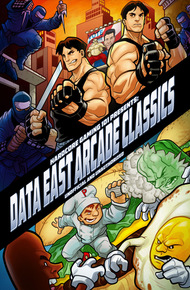 Are you a bad enough dude to buy this book? Hardcore Gaming 101 Presents: Data East Arcade Classics covers the diverse library from the underrated Japanese developer, including golden era classics like BurgerTime and Karate Champ; eccentricities like Karnov and Trio the Punch; outstanding genre pieces like Desert Assault and Night Slashers; licensed titles like RoboCop and Captain America and the Avengers; and cult classics like Boogie Wings and Windjammers. Also included is an extensive examination of their popular competitive puzzle game, Magical Drop, and of course, the ninja-fighting, president-saving Bad Dudes and its pseudo-sequel Two Crude Dudes.

"Hardcore Gaming 101's guides hardly need any introduction at this point, and this latest one dips into a corner of the arcade universe that may surprise even experts, spanning Data East classics like BurgerTime to obscurities like Skull Fang & everything in between - very entertaining." – Simon Carless

Among American fans, Data East is often compared to movie distributor Cannon Films, an outfit that had a lot of enthusiasm but not a whole lot of talent. Many of Data EastÅfs titles had bizarre premises, with more than a few being heavily influenced by cheesy 80s action movies, and the quality of the games themselves often paled in comparison to larger companies like Capcom or Konami. ThereÅfs a loveable quirkiness to their output, though, and even their more derivative titles were willing to experiment and bring something interesting to the table. Plus, their later library is often overlooked, with numerous legitimate cult classics like The Cliffhanger: Edward Randy, Boogie Wings, Windjammers, and Rohga. Then of course there was their first big hit of the golden arcade era, BurgerTime, as well as their competitive puzzle series Magical Drop. They also put out some outstanding soundtracks, largely thanks to their in-house band, Gamadelic. In other words, their library is a lot more interesting and diverse than what's typically acknowledged. We hope that this book will help you discover Data EastÅfs unique charms, and find something cool to enjoy!