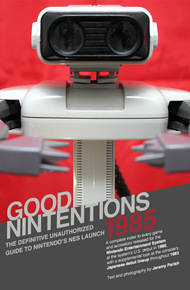 A comprehensive and in-depth look at one of the most important video game lineups ever: The 16 games that comprised Nintendo's American rollout for the Nintendo Entertainment System. Good Nintentions 1985 takes a game-by-game look at these "black box" classics and the hardware that accompanied them, examining the NES launch lineup through both a lens of critical analysis for the quality of the games and a wider view that details their place in the context of their times, the creative forces behind them, and their overall impact on game history.

Presented as a series of standalone written vignettes about each game and peripheral, Good Nintentions 1985 also includes original photography of the games' physical packaging and screen shots taken directly from NES hardware. Unlike other books detailing the history of the NES, Good Nintentions 1985 focuses on a singular moment in the system's history in exhaustive detail, supported by extensive original visual reference material. From the pointless Stack-Up to the timeless Super Mario Bros., this book offers both a trip down memory lane and a valuable reference.

Also included here is a supplement on the nine games that appeared during the console's equivalent Japanese launch period (Family Computer, 1983) to help contextualize just how extensively Nintendo reshaped the NES and its lineup for the American market. Written by the creator of the Game Boy World series, this is the first of several comprehensive year-by-year NES compendiums to come.

"The story of the Nintendo Entertainment System's initial U.S. game line-up, with a plethora of newly taken pictures & screenshots, peppy analysis of the titles, and even a bonus section dealing with the Famicom's 1983 launch in Japan - available on Kindle for the first time, too!" – Simon Carless

The NES took so long in coming to the U.S., in fact, that by the time it arrived in full force its replacement had already launched in Japan. The console — as the Family Computer — had been on the market for three years and was beginning to look long in the tooth by Fall 1985, especially as its cart-based games weren't evolving to properly reflect the shifting technology of the era, limited as they were by both memory capacity and hardware restrictions. So, even as Nintendo's engineers were redesigning the Japanese Famicom to become the American NES, they were also putting together the Famicom Disk System.

That's a tale for another time, but the basic idea behind the Disk System was that it would expand the capabilities of the console by adding a higher-capacity storage medium, enable persistent data saves, and add new hardware features such as an extra audio channel for music. Naturally, Nintendo put its top men on the task of coming up with showcase software for the Disk System. The peripheral's first big games came from both Shigeru Miyamoto, who would design The Legend of Zelda, and Gunpei Yokoi, who would supervise Metroid and Kid Icarus. These three games represented a fundamental shift in Nintendo's internal development ethos. Unlike the quick-fix action-driven Famicom games that had come before, these would be massive, RPG-inflected adventures that demanded players record their progress for play across multiple sessions.

These games were also part of a general zeitgeist toward deeper, more expansive home gaming experiences — the same trend that gave us Dragon Quest. This shift would have happened without the Disk System (in fact, Dragon Quest games never appeared on Disk System), but certainly the new add-on hastened the transition. Nintendo's developers recognized the sea change represented by the Disk System and fully anticipated making a leap from carts to disks. The majority of first-party Famicom releases over the next few years would appear exclusively on diskette. And so, as these creators prepared to leave behind cartridges for the fertile pastures of magnetic media, Miyamoto's team decided to bid farewell to the old ways with a creation that, in his own words, was meant to be the ultimate cartridge game: Super Mario Bros.