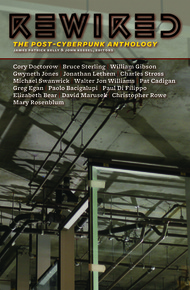 James Patrick Kelly is the Hugo, Nebula, and Italia award–winning author of Burn, Think Like a Dinosaur, and Wildlife. He is a member of the faculty of the Stonecoast Creative Writing MFA Program at the University of Southern Maine. He has co-edited a series of anthologies with John Kessel, described by the Encyclopedia of Science Fiction as "each surveying with balance and care a potentially disputed territory within the field." Kelly is the technology columnist for Asimov's Science Fiction magazine and the publisher of the e-book 'zine Strangeways.

John Kessel is a Nebula, Sturgeon, and Locus award winner and the author of Corrupting Dr. Nice, Good News From Outer Space, and The Pure Product. His latest novel, The Moon and the Other, is scheduled for publication on April 4, 2017. He teaches courses in science-fiction, fantasy, and fiction writing at North Carolina State University. His criticism has appeared in Foundation, the Los Angeles Times Book Review, the New York Review of Science Fiction, and Science Fiction Age.

From the grittiness of Mirrorshades to the Singularity and beyond, it's time to reboot the revolution. Are you ready?

These sixteen extreme stories reveal a government ninja routed by a bicycle repairman, the inventor of digitized paper hijacked by his college crush, a dead boy trapped in a warped storybook paradise, and the queen of England attacked with the deadliest of forbidden technology: a working modem. You'll meet Manfred Macx, renegade meme-broker, Red Sonja, virtual reality sex-goddess, and Felix, humble sys-admin and post-apocalyptic hero.

Editors James Patrick Kelly and John Kessel (Feeling Very Strange: The Slipstream Anthology) have united cyberpunk visionaries William Gibson, Bruce Sterling, and Pat Cadigan with the new post-cyberpunk vanguard, including Cory Doctorow, Charles Stross, and Paolo Bacigalupi. Including a canon-establishing introduction and excerpts from a hotly contested online debate, Rewired is the first anthology to define and capture the crackling excitement of the post-cyberpunks.

Editors John Kessel and Jim Kelly, both multiple-award-winning authors themselves, have collected stories from the first practitioners of cyberpunk including William Gibson, Bruce Sterling, and Pat Cadigan, as well as the new post-cyberpunk vanguard, including Cory Doctorow, Charles Stross, Paolo Bacigalupi, and Jonathan Lethem. I'm very excited to include this fine anthology in the A.I. Storybundle. As a bonus, Kessel has included excerpts from his personal correspondence with Bruce Sterling about science fiction and "the movement." – Lisa Mason

"Introduction: Hacking Cyberpunk" by James Patrick Kelly and John Kessel
"Bicycle Repairman" by Bruce Sterling
"Lobsters" by Charles Stross
"The Voluntary State" by Christopher Rowe
"When Sysadmins Rules the Earth" by Cory Doctorow
"The Wedding Album" by David Marusek
"Two Dreams on Trains" by Elizabeth Bear
"Yeyuka" by Greg Egan
"Red Sonja and Lessingham in Dreamland" by Gwyneth Jones
Sterling-Kessel Correspondence
"How We Got in Town and out Again" by Jonathan Lethem
"Search Engine" by Mary Rosenblum
"The Dog Said Bow-Wow" by Michael Swanwick
"The Calorie Man" By Paolo Bacigalupi
"The Final Remake of The Return of Little Latin Larry With a Completely Remastered 'Soundtrack'" by Pat Cadigan
"What's Up Tiger Lily?" by Paul Di Filippo
"Daddy's World" by Walter Jon Williams
"Thirteen Views of a Cardboard City" by William Gibson

From "Hacking Cyberpunk," the introduction to Rewired: The Post Cyberpunk Anthology

The Hugo award-winning editor David Hartwell tells the story of how Bruce Sterling approached him in 1983 with a proposal for an anthology of short stories which would eventually become the classic Mirrorshades. The book was to be a kind of literary manifesto for the newly emerging cyberpunk movement. David said he was indeed interested and asked how many writers Bruce expected would be in Mirrorshades. Bruce said he had five or six in mind. David replied that five or six was not enough for a movement and that Bruce would need at least a dozen. So Bruce set out to recruit writers for the movement and his anthology, even if they were not card-carrying cyberpunks. Among those he found was one of the editors of this book, who was at the time most closely associated with the humanist camp, said to be in opposition to cyberpunk.

It is not surprising that the cyberpunk movement, so quick to sneer at other kinds of science fiction and to strike an attitude of hip self-importance, would be controversial. To its critics, cyberpunk was all borrowed surface and no substance: rock and roll Alfred Bester, Raymond Chandler with the serial numbers filed off. To the cynical, it was nothing but a marketing ploy to advance the careers of those select few who were permitted to hang their leathers in the secret Node Zero clubhouse. But as they continued to publish their innovative stories and novels, readers and — eventually — writers and critics began to acknowledge that there might be something to cyberpunk. In 1986, the pseudonymous Vincent Omniveritas, writing in the cyberpunks' snarky house organ, Cheap Truth, brought the classic cyberpunk era to an end. "I hereby declare the revolution over," crowed Vince. "Long live the provisional government."

And then the real arguing started.