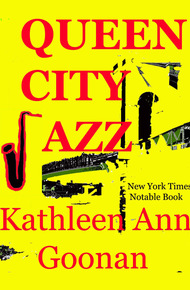 Kathleen Ann Goonan was born in Cincinnati, Ohio, the setting of her Queen City Jazz (Tor, 1994), debut novel. William Gibson described Queen City Jazz as "An unforgettable vision of America transfigured by a new and utterly apocalyptic technology." It became a New York Times Notable Book and a British Science Fiction Association finalist. Goonan was hailed as one of the first science fiction writers to explore the possibilities of nanotechnology in Graham Collins in his Scientific American piece "Shamans of the Small."

In Verity's world, nanotech plagues decimated the population after an initial renaissance of utopian nanotech cities. Verity has been raised, an orphan, in a tiny Shaker revival community where all are forbidden contact with the enlivened Cities. Yet as she grows up on the isolated farm, she is often drawn to the City of Dayton, abandoned nearby, and to its self-contained and still-functioning library. Her happy life is suddenly destroyed when the Shakers, in spite of their precautions, contract a nanotech plague that possesses them. Blaze, the only young man in the community and Verity's best friend, is shot by a crazed elder.

And so Verity, with her dog Cairo—and the body of Blaze wrapped in a nanotech cocoon—sets off on a quest to the Enlivened City of Cincinnati. It is a place of legend, walled off from the rest of the world. Where huge bio-engineered bees carry information through the streets and enormous nanotech flowers burst from the tops of strange buildings. It is the place where Blaze might be brought back from the brink of death.

But Cincinnati is a city of dreams turned into nightmares, endlessly reliving the fantasies of its creator, a city that Verity must rule-or die.

I'm delighted to include award-winning and award-nominated Kathy Goonan's acclaimed debut novel that portrays a future transformed by technology and a young woman's journey through that future. Kathy is also a Visiting Professor at Georgia Institute of Technology where she teaches Creative Writing and Literature. You're in the hands of an expert author. Linger over this fine book. – Lisa Mason

John was blue, steady as the blue light far down the abandoned maglev track; Verity and Cairo had walked down it one spring day when Verity was only ten though she was forbidden by Evangeline. Verity watched the light in wonder, thinking of John. It still received the hidden signal programmed into its chips, activated, John told her, by power stored in its solar battery.

Verity had flipped her straw hat back over her shoulders so that it hung by the string around her neck and watched the light for a long time before Cairo, her dog, grew restless and thrust the picture of home before her relentlessly, several times. It was a plain, white frame house on a low hill protruding from a glittering green sea of soy and corn, five miles from the Great Miami River. Solar power was allowed by the Scriptures, as long as it was not enlivened, and they had several ancient panels on their roof which John had foraged from far-off Columbus.

Verity had gone with John, when she was little; urging the horse on with pictures of oats, though John thought it was the flick of his whip that moved the beast. The empty, deactivated City scolded them audibly for disconnecting the solar panels. It terrified and fascinated her. She begged to go back, but John had been more spooked than she, and it was several day's journey besides. One wagonload was all they got from Columbus. Cincinnati was closer, but it was still living, and the Scriptures absolutely forbade contact with an Enlivened City. John wasn't too comfortable about Dayton either, although it was only about ten miles away.

And if people were colors then Sare was yellow like warm golden cornmeal after it was ground at the mill on Bear Creek, or the sun just after it rose over the fields and forests of Western Ohio. Evangeline, Sare's twin sister, was hard and green like the emerald ring Verity wore on her right hand. They were both around forty.

Blaze, nineteen, was wild as an orange autumn sunset seen through the black branches of the bare orchard just before storm set in. That wild sound was in him too, of branches rattling furious in wind rushing from the flat plains to the west, crystallizing the sky with rapid frigidity. Verity loved weather, and weather's changes, and how people were like weather. She had once hooked into some old weathersats and eddied through years of the quickened flow of storm systems for several hours before John flung open the door of the evening-darkened library and rudely disconnected her, telling her roughly that she could read all she liked but to stay away from that and that she didn't need to know. That annoyed her. Weather, she told John, is very important to farmers and he said well that weather's a century old, a lot's happened since then.

But she often crept into that corner of the library afterwards and hooked herself in. Russ said it was all right, anyway. Anything in the library was for them all. John was not the boss. He only thought he was sometimes. The tiny bumps behind her ears where she hooked in hadn't been discovered till she'd been cleared, certified, and taken from Edgetown, just outside Cincinnati. At that time Verity was, by their best estimation, three years old.

Sare had told Verity how she had found the nubs, the second day Verity was with them. Sare was braiding Verity's hair when she felt the right nub with her little finger. "I trembled," she said. "Then I pulled back your hair for a better look. I'm not the fainting type, but I almost fainted then." Verity had been certified plague-free by a Certifier—an old man—in Edgetown. Verity didn't remember it, but apparently she was taken inside a small black building for a while and brought out with a nod. The Shakers had no idea what went on inside the building, just knew that they trusted the old man as he had been a friend of a long-dead Sister. Yet though she was plague-free, the nubs proclaimed her abnormal, and the source and effect of this anomaly was completely unknown to the Shakers and therefore to be feared.

They had called a Meeting immediately. Verity could imagine the arguments, but they loved her already and kept her of course, despite the unknown danger.

The Shakers had not dared venture back to Edgetown since they had added Verity to Shaker Hill, even though four Elders and two Elderesses had died and should have been replaced. They never really talked about it, but Verity knew it was because of her. The nubs behind her ears were proof of some sort of tampering; tampering which might infect the Shakers in some unknown way or even kill them. The Shakers took responsibility for her, but fear of the unknown kept them from returning to Edge-town for more children, and the community had dwindled. Twenty years ago, it had been thriving, with fifty Brethren, mostly very old people. The last of those old ones had died when Verity was a child.

But so far, in all the years of her growing up, Verity had posed no danger. She seemed quite normal. She knew she was lucky to be at Shaker Hill; they told her so, and she believed it. Her days and nights were part of a larger Shaker cycle bound to the land, exploiting nothing, using what they needed. They were all going to Heaven when they died, which was a lot like Ohio, all ordered and filled with the living light that Verity felt she saw everyone moving through fairly often, especially in the evening when they were preparing dinner, and sometimes when they all worked to get the hay in. Most of them did not like Cairo much. She had come wagging out of a thicket a few years earlier, and became Verity's dog. They were inseparable.

The rest of her family was a jumble of doors—the private rooms in which the Brothers and Sisters lived—and kind faces, arms that hugged, voices that scolded or more often gently corrected and instructed, a deep and wide community that held her in a hammock of relationships until she was sixteen, and taking in the triticale harvest by herself since Tai Tai was not feeling well that day.

Verity hadn't seen the Flowers since she was a child, but often longed for them with a shortening of breath, an ache in her chest, with a vision that spread out inside her mind like the growing light of day. And she had found it hard to believe that Bees were almost as large as humans (if they even existed at all, that is), but that day of harvest, when she was sixteen, she found that it was so.

Her back ached from bending over with the scythe. Her bike lay on its side a quarter mile away, at the top of the bank above the flood plain where she worked, its rust-flowered blue paint catching the sun. The Great Miami River glittered wide, deep, and olive-green, edged by a steep drop-off at the end of the field. It overflowed its banks each spring, making this fertile ground and worth the fifteen-minute bike ride. The remains of a small, old town, Miamisburg, lay across the river. The earthquake flood had swept much of it away. A few remaining sections of a fallen iron bridge lay tangled in the river below.

Verity's rhythmic swipes slowed as a foreign vibration entered her body even before she could hear it. Cairo, who had been lying in a cool thicket at the edge of the field, leaped up and whined.

Verity turned, shaded her eyes with her hand, and saw against the sun a small black dot which grew steadily larger.

It was following the path of the river.

And it was a Bee.

Sweat burned her eyes as she stared. She was twenty feet from the bluff overlooking the river, and wanted to run, take cover, but couldn't move. Her heart contracted in fear as she gradually realized how large it was.

Her entire body hummed as the Bee halted and hovered near her, over the middle of the river and about thirty feet above in the air. She was caught in the rush of air stirred by its wings, in the loud, lovely tone they gave forth in vibrating, almost as if the strength of the sound could lift her too.

Soft gold and brown bands circled its body and glowed in the sun. Its front was a black complication of shiny parts. The eyes that stared at her reminded her of the heart of a Black-eyed Susan. Pictures hummed in the air between them, and Cairo leaped up, stiff-legged, and began to bark.

A man's face was before her, half torn away and unrecognizable. Spurting blood and gray brains mixed with ivory splinters of bone. The remaining eye stared lifeless and she felt deep horror yet could not look away.

The next instant Verity stood on the edge of a high chasm surrounded by tall buildings. Far below flowed rivers of light. Across the chasm an impossibly huge iris moved in the night wind, filling her with deep happiness which switched suddenly to a darkness she fully believed would never, never end.

Her own anguished cry startled her. Her vision cleared. She saw the field, the river, the sky above.

Faced with the hovering Bee, her hair blown back from her face by the wind from the vibrating wings, Verity knew with stunned and instant certainty that the pictures came from Cincinnati, yet did not know why she saw them, what they meant, or why they tore at her.

But she suddenly realized what would happen next.