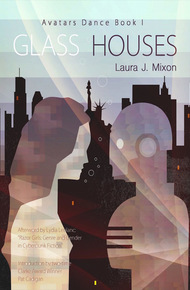 Laura J. Mixon started writing for her own amusement at age eight, and fell in love with SFF when she discovered the science fiction shelves in the local library. She's been writing and reading it ever since.

Her latest work, Up Against It, came out from Tor Books (as M. J. Locke) in 2011 and is due for a re-release soon as part of an upcoming trilogy, WAVE. The series features a group of savvy and desperate people (and other beings) who live in a populated and fractious solar system a few hundred years from now, all struggling to survive—and prevent an interplanetary war.

Earlier works include her acclaimed feminist cyberpunk trilogy, AVATARS DANCE (Glass Houses, Proxies, and Burning the Ice); Greenwar, an eco-thriller collaboration with SFF writer Steven Gould; and Astropilots, a YA science fiction novel chosen as the lead book for OMNI-Scholastic's TIME SHIP series. She won the Hugo Award in 2015 for best fan writer.

Mixon's work has been the focus of numerous academic studies of technology's impact on gender, identity, family, and the environment. In addition, she has a 35-year career in environmental engineering and technology, with expertise in sustainability, risk, and information management systems. In 2008, with renowned game designer Chris Crawford, Mixon co-founded Storytron, and collaborated with Crawford to create an interactive storytelling development tool for writers.

A Clarion graduate (1981), she served for two years in Kenya in the Peace Corps (1981-1983). Nowadays she can be found on Twitter as @LauraJMG, and blogs occasionally at laurajmixon.com and feralsapient.com.

Ruby Kubick runs her own waldo business from her living room. She bean-jacks into her big machines to roam the dirty, heat-drenched, water-soaked streets of New York City and look for work. Construction, security, no job too big or too small. But when she tries and fails to save a wealthy Egyptian in a collapsing skyscraper during a hurricane, she attracts unwanted attention. You want justice on tomorrow's mean streets; it's going to cost you. Particularly if you're guilty.

The 1992 feminist cyberpunk classic, finally back in print with an introduction by two-time Arthur C. Clarke Award winner Pat Cadigan and an afterword by Lydia LeBlanc on genre and gender in cyberpunk fiction.

Laura vaulted onto the publishing stage with this feminist cyberpunk classic as a part of what Locus Magazine has called "the new Golden Age of science fiction." Here Laura takes us to 21st century Manhattan for this gritty story that's part science fiction and part mystery. Savor that exciting mix of genres along with Laura's vision of the future. – Lisa Mason

I don't know if you've ever had a skyscraper collapse on you. I don't recommend it. The floor gave out under me, cascades of concrete and steel fell onto my head, the screams of the old man filled my ears. I remember those few seconds in flashes, like it all happened under strobe lights.

His nearness to me-Golem when the ceiling collapsed was the only thing that kept him from being killed instantly. One of Golem's arms crocked up as I-he toppled over and protected the old man's head and upper chest. The old man probably wished he was dead, though, because a steel beam fell across his abdomen and crushed his internal organs and let buckets of blood spill into his abdominal cavity.

I know all this because I-Golem wasn't completely disabled in the crush. The same steel beam that fell on the old man lodged against the wall and kept other chunks of mass from destroying Golem's casing. That much I saw before the shock threw me home.

I struggled backward through the gel to the wall, pulled my knees to my chest, and shook. The connector dangled from wires in my hand—I must have pulled it loose from the beanjack at my crown. I wanted to tear the monofilaments right out of my brain. But the old man's screams hung in my ears. He was still alive in there and he wouldn't be for long. No waldo rescue squad, no ambulance would get there in time to save him. Every second counted. So I went back.

Golem's light had gotten smashed and the infrared was useless in that chaos. Systems weren't in great shape—the needles danced like amber Pick-Up Stix in my-Golem's vision. Four of his eight gigacrystals were shattered. Besides the arm immobilized over the old man's head, two limbs were inoperable, crushed. One of his two cameras was out, too. His chassis was severely damaged, with hydraulic pressure dribbling slowly away.

It took only seconds to clear out all the software and fill the remaining four linkware crystals with the bare-bones operating systems. The gyros told me which way was up, so I knew which way to dig, and I-Golem had length and strength—of the two of Golem's five arms still working, one was his telescope arm and the other his schwarzenegger. I've scavenged under rubble before and I know how to keep an unstable structure from collapsing. Things didn't seem too bad, except for the old man's screaming. So I-Golem got started.

He was crazy with pain. A couple of times I-Golem tried to comfort him but he didn't listen. It finally got to me—I-he yelled at the old man to shut the fuck up and stop feeling sorry for himself. Like he didn't have a reason. Christ. I hope he was too far gone to understand.

Anyhow, as the sounds he made got wetter and softer I-Golem dug faster. But he'd been silent for what seemed like days before Golem's hole saw drilled through to air. That give me-him enough light to see how to work free.

My-Golem's ultrasound filaments fractured the chunk of concrete that had Golem pinned against the steel beam. Then I-he—ever so carefully!—disconnected the arm that protected the old man's head, rolled myself-Golem all the way onto his back, then retracted the wheels—which lifted me-Golem up and gave the wheels purchase on the floor on either side of the Coffin—and slid myself-him off of it. With some judicious shoving and wedging I-he freed myself-him from the debris. Then I-Golem propped up wreckage, cleared a path for the old man, and slid him free.

I saw then that there was no point in calling an ambulance. His body was already starting to cool. I could have used Golem's IR earlier, after all, and saved myself a lot of work.

I still remember all the details—the expression he'd died with; the way his crushed arm got left behind; the way his belly had swollen up with blood till it looked like the belly of a tick.

Anyhow, I sat there, squatting inside my battered Golem, and looked at him for a while till I realized that the sun had risen and was shining into Golem's camera. Beyond the crumbled wall, where another interior room had been last night, was open air and twisted snarls of metal struts. I-Golem caught a glimpse of the Manhattan-Queens ferry moving up the sparkling East River, trailed by crying gulls; last night's gales had softened to a breeze. Streamers of clouds raced inland overhead.

The storm remediation waldos, hundred-foot-tall mantises with blue flashing lights and steel maws, crawled along the streets below, lifting wreckage and debris with their crane arms. They scooped sludge and wood with their dozer mouths, dropping the debris into the massive hoppers they dragged behind.

According to Golem's chronometer, it was almost six. The building wrecker waldos were due—we had to get out.

There wasn't much hope for the scavenged data but I-Golem checked the Coffin anyway. As I'd suspected, they were so much worthless debris, bent and broken. Man, was Vetch going to be pissed. He hated losing salvage.

I-Golem emptied the Coffin, put the old man inside, and slid the Coffin onto Golem's back. Then I-Golem and the old man headed for the nearest support cable.

A failed scavenge, a failed rescue, and Melissa off fucking some strange man for spending money in the middle of a hurricane. All in all, not a good night.