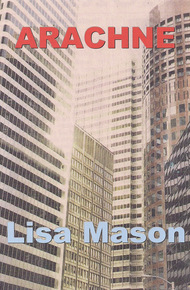 High above the dangerous streets of post-quake San Francisco Island, mechanically modified professionals link minds in a cybernetic telespace to push through big deals and decisions at lightning speed. But unexplained telelink blackouts and bizarre hallucinations have marred mediator Carly Quester's debut appearance before a computer-generated Venue—forcing her to consider delicate psychic surgery at the hands of a robot therapist, Prober Spinner.

Suddenly the ambitious young mediator is at risk in a deadly Artificial Intelligence scheme to steal human souls—because the ghosts of Carly's unconscious may be a prize well worth killing for.

I published my first story, "Arachne," in Omni when that late, great magazine had five million subscribers worldwide. As I was casting about to write my first novel, I realized I had so much compressed material in the story that I could expand the characters and ideas into a novel. Arachne debuted on the Locus Magazine Hardcover Bestseller List. – Lisa Mason

The chair waits for her in the ruby-lit room. Carly Quester steps inside, slams the door. The chair sits in silence. Carly stalks around it, kicks its ugly feet, glares at it.

The chair is primitive, plain-legged, straight-backed. It is rude and mean, as impersonal as the gridlock. Black plastic wires loop and trail all around it. A red switch juts up from one arm. Platinum beams angle into a frame that will pitilessly grip her when the power switches on and her body jolts.

Carly Quester is a slim-limbed genny with customized morphing. Strands of copper and gold thread her hair, which falls to her shoulders in style de nuevo. Ebony lash implants line her eyes, a romantic gift from her father in the sixteenth year after the lab decanted her. Wide feathered brows and curved cheekbones hint at the Sino-Slavic bioworks her pragmatic mother had chosen. She slicks her lips plum-red.

Seated in other chairs, in other rooms, she will cross a silk-stockinged ankle over the other knee, and she thinks nothing of striding up the quake-cracked hills of the City in her gray-snake, four-inch heels.

She's just turned the age when you start to do things in the world.

She sits down, knees side by side.

Straps of black plastic, filmy with dried sweat, lie limp on the chair's arms and legs. She snaps the straps over her own arms, her own legs. A mocking slap of cruelty, that she should have to strap herself into the chair.

She breathes deeply—one, two, three—preparing for the moment when the power switches on and the neckjack descends.

But how can anyone ever really prepare?

It's fine to speculate, to envision bravery. You strap in. You sneer at the ruby-lit walls. You jeer at the wires. You welcome the bite of the neckjack, welcome the pain.

She kicks at the wires with a high heel. With her forefinger curving over the arm's edge, she yanks the red switch herself just to do it, cool tool.

With a shudder, she leans back. Her spine presses the master control. The control signals the headpiece to descend with a rasping whine. Wireworks yawn open, clamp down around her skull.

In front of her, the comm flickers on, flooding her eyes with jade luminescence. A hum commences, rising up in an awful crescendo. The neckjack darts out on a robotic cable, its tiny platinum beak biting deep into the linkslit installed at the back of Carly's neck.

The red switch clicks, and the power slams on.