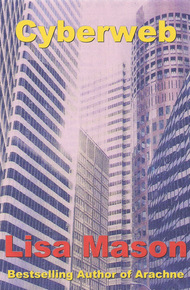 Carly Quester was once a professional telelinker with a powerful and corrupt mediation firm. Now she lives as an outlaw among the underground in San Francisco, wanted by the authorities for dubious crimes against Data Control. But with a new assignment from a mysterious sengine—and the help of a standalone AI entity, Pr. Spinner—she seeks the fast-track back into public telespace and the Prime Time.

Her assignment, however, comes with sticky strings attached. For it has made Carly the target of a ruthless mercenary ultra, the love obsession of the young shaman of a savage urban tribe—and a possible pawn of the Silicon Supremacists plotting no less than the annihilation of humankind.

Cyberweb is the sequel to Lisa Mason's first novel, Arachne.

Cyberweb is the sequel to Arachne, continuing the life journey of Carly Quester, who entangles herself in a web of sinister A.I. entities. Do some of them want to destroy humanity? Read on. Like Arachne, Cyberweb debuted on the Locus Magazine Hardcover Novel Bestseller List. – Lisa Mason

Carly Quester creeps through the crowd, winding her way around a hydroponic vegetable vendor whose brackish tomato tanks twitch with mottled olive crawdaddies. Her stomach rumbles at the sight of fresh food, but shellfish grilled in butter will have to wait for another day. A frumpy bank teller lingers in the gridlock, humming softly, waiting for the light at California Street to change.

With a cautious hop, the bank teller ventures off the curb, navigating the squat stack of its main housing between a pickup truck packed with surly locomotors and a bus of screaming schoolchildren. The bank teller pauses in the crosswalk, twiddling its secondary cables.

Carly pounces, seizing the bank teller's monitor. She jams a credit disk into the teller's download drive, punching her code on its astonished keypad, together with a bootleg file extension overriding Data Control's order freezing her assets.

The bank teller struggles and beeps, staggering and swinging about.

Carly slaps the monitor's faceplace, holds snub-nosed pliers to its main cable. "Spit it out, bot," she mutters to its audio. "It's my damn account. Eight grand or you're chop-shop parts."

Carly slaps the monitor again. Flat of the hand, no fingerprints. Talk, right. The synthy voice, the voice of a sengine, is reciting her former telespace access code. Talk? Don't even breathe.

The bank teller's alarm system clicks on, wailing through the downtown din. The red Cancel-Trans light blinks furiously. Carly joggles the main cable with the pliers till the cable is nearly free of the port.

"Carly Quester!" rattles Pr. Spinner's rusty synthy voice. The perimeter prober stands next to a Recycling Bin on the opposite side of California Street. Her owlish faceplace puckers, her graspers clack, her spinnerets click. The prober's foot rollers scoot back and forth with anxiety. "By bot, it's the heat!"

"She means scram, flesh-and-blood," squeaks Saint Download standing beside Spinner, waving its multitude of armlets. Its gender-neutral faceplace clicks through a dozen ambiguity sequences. Saint Download is the ugliest little bot Carly has ever seen. The bot doesn't think much of her, either.

Six and a quarter, six and a half. The bank teller stalls at six thousand five hundred softbucks. "Damn!" Carly pounds Eject but the disk won't come free.

A team of copbots careen down Sansome Street, weaving in and out of the gridlock. Sirens shriek.