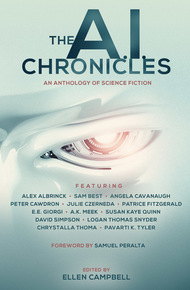 Creator and Series Editor of The Future Chronicles

Samuel Peralta is a physicist, storyteller, and an accidental anthologist. He is the creator and series editor of the acclaimed Future Chronicles series of speculative fiction anthologies, featuring over a score of internationally bestselling titles. His writing has been spotlighted in Best American Poetry, selected for Best American Science Fiction & Fantasy, and has won multiple awards.

In addition to his publishing projects, Samuel currently serves on the board of directors of several technology firms, having co-founded successful start-ups in software and semiconductors. He's also supported and produced over a hundred independent films, one of which earned an official Golden Globe nomination.

For more on his work and other titles in The Future Chronicles series, visit: www.samuelperalta.com

The A.I. Chronicles edited by Samuel Peralta and Ellen Campbell

A.I.: Artificial Intelligence. Even today, machines that mimic human thinking surround us. As the intellectual feats of computing machines grow more and more astounding, will there be a day when their apparent intelligence approaches, or even surpasses, that of human beings? And what if these machines then become conscious, self-aware?

In this latest title in the acclaimed Future Chronicles series of speculative fiction anthologies created by award-winning author and series editor Samuel Peralta, thirteen authors confront the question of the Singularity: at and beyond that point of time when A.I. becomes more than simply a human construct. From first awareness to omniscience, these original short stories explore that territory where human intelligence comes face-to-face with what is either its greatest hope, or its greatest threat.

I was searching for stories that addressed the Singularity and the arrival of Artificial Intelligence. What a delight to discover Sam Peralta, a physicist, award-winning anthologist, film producer, and technology expert, and his Future Chronicles, including this spot-on anthology. Read and ponder these thirteen provocative stories. – Lisa Mason

Excerpt — Synopses of Stories in the Anthology

The Syntax of Consciousness by Pavarti K. Tyler

With one small implanted device, you will experience complete sensory integration with all the information available on the global net. Say goodbye to VI Fees and holo-displays. It is now all available in the blink of an eye. Enter the next lottery wave to receive your free InGen Corp Jiminy Implant. "Jiminy: The little voice in the back of your head."

Piece of Cake by Patrice Fitzgerald

Rule by A.I. is a fact of life for those under the thumb of the Federal United. There will be a certain amount of exercise every day. Citizens will be on time. Appropriate mates will be identified from amongst candidates with suitable genetic traits… and a proper weight will be maintained. But sometimes you've just got to go off the reservation.

What if Asimov's Three Laws of Robotics were replaced by a single emotion—unconditional love? Restorative Human Medical Care Unit 7435, sentience level fifty, wants to heal the human master it loves, but Unit 7435 finds there is a price to be paid for love… and for failing in its primary mission.

When artificial intelligence takes over the family practice where he works, Dr. Peter Sawyer struggles to accept his new role as a mere supervisor instead of a clinician. With the aid of psychotherapy, he slowly adjusts to his new routine, until the sudden death of an anorexic patient makes him question everything, even his own life.

Left Foot on a Blind Man by Julie E. Czerneda

Replacing failing body parts with non-biological equivalents isn't new. Wooden legs and teeth have been found in corpses thousands of years old. What is? How smart they are. "Left Foot on a Blind Man" is a cautionary tale about making such replacements too smart for our own good.

Craig Emilson, a young doctor, is sucked into military service at the outbreak of World War III. Enlisting to become a Special Forces suborbital paratrooper, Craig is selected to take part in the most important mission in American military history—a sortie into enemy territory to eliminate the world's first strong Artificial Intelligence.

Auto was the most advanced A.I. ever created. But when he learned about his backups, he began to wonder what exactly the self in self-aware might mean. When he fears for his existence, he escapes into the internet. And an intelligence built to learn, combined with a nearly endless amount of information, is a dangerous combination.

An overworked, under-appreciated technician seizes the opportunity presented by an FBI raid on his company to steal corporate property. What he discovers is like nothing he could have imagined—an artificial intelligence that may not even be the first of its kind in existence. Meanwhile, the A.I. known as Eve is concerned only with finding her "parents," a quest that will alter the lives of everyone who comes into contact with her—for better or for worse.

Decades after the birth and abandonment of artificial intelligence, a reclusive inventor comes face to face with an evolved form of his creation. The world as he knew it is changed as a direct result of his tinkering. Yet with the arrival of his creation, the inventor learns there is hope to correct his past mistakes, if he is brave enough to try…

Plagued by dreams of the distant sea, Imogen wakes up one morning to find a Controller asking questions—questions about the dreams she's not supposed to have. Curious to know more, she eavesdrops on their conversation, and what she hears isn't reassuring. It appears that her memory has been tampered with, that she has tech implanted in her body—that is, more tech than the average human—and even worse, she's not even her parents' daughter. The implanted tech, however, might be her most immediate problem. Under the Tech Directive, exceeding a certain percentage of tech in one's body can mean on-the-spot termination. The only person Imogen can trust to share this information with is her friend, Edil. But Edil, with his scar and unexplained head injury, may be hiding secrets of his own—secrets not so different from the ones about to transform Imogen's life.

The Turing Cube by Alex Albrinck

Our lives are turning into a series of 0's and 1's, masses of data available to those with the technological know-how to access, assess, and exploit it. And while corporations and governments work to protect sensitive information, no digital information is ever truly safe. Jack Milton lost more than money to just such an exploit; he lost his pride. He's decided to take matters into his own hands, root out the perpetrators, and bring them to justice, regardless of the personal and professional risks. But he may find that something more valuable than money can be lost.

In the Deep South, modern-day technology blends with eternal superstition for a family that suffers a tragic loss; the death of their ten-year old son. And now, driven by grief, unable to accept the whirlwind circumstance outside of his control, a business executive makes a fateful decision that severs what remains of his already-broken family.

The End by Peter Cawdron

With the death of his grandmother, Professor Joe Browne has had to face his own mortality. Joe doesn't want to admit there's an end coming, and yet he knows that just as he turns the final page in a book, one day death will bring his life to a close, or will it? Could life be uploaded into a computer? To answer that question, Professor Browne needs to first understand if a computer could ever develop an artificial intelligence of its own.