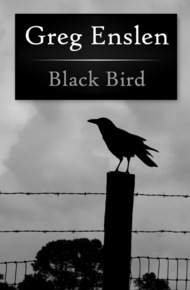 Greg Enslen grew up an Air Force brat and has visited every state in the union, living in a good chunk of them. He's been writing since High School but has recently found the time to get serious about it after moving with his family to Ohio from the hustle and bustle of Washington D.C. He's written three novels and two works of nonfiction, and has several more books on the way.

Jack Terrington has an aptitude for getting away with murder. He’s been doing it for twenty years. He’s a drifter, leaving a trail of fear and death from coast to coast. And though he’s always avoided capture, he’s haunted by the memory of the sheriff of Liberty, Virginia — Jack had escaped him only by dumb luck. And that’s always bothered him. Now, he’s returning to the small town to settle the score.

Meanwhile, David Beaumont couldn’t wait to leave Liberty—he was tired of listening to endless stories about what a great man his father was, how he saved their town from a killer, sacrificing his own life. David’s on his way to a new life, leaving his hometown—and his father—far behind. But the killings have started again, and David’s the only one that can stop them. Should he return to the town he despises? And if he does, will he end up like his father—dead?

Jack Terrington had just reached the grassy median and started across it when his foot caught on some uneven asphalt in the median, sending him sprawling. His bag went flying and he landed with a hard ‘thump’ on the muddy grass of the median. The wind was knocked from his body, and he lay gasping for air, the rain spattering to the ground around him.

He started to get up, but instead he lifted his head up and saw the police car racing toward him and he stayed down, staying glued to the ground, willing the cops to ignore the dark shape he made on the median. The car came closer and he buried his face in the mud, ignoring the disgusting squishing sound, and laid as flat as he could.

The police car, its lights flashing and spinning lazily, raced past him, and did not stop, or even slow. He couldn’t see it but he heard its passage, and when it was gone, he looked up, seeing the twin red taillights as they disappeared into the distance.

He would’ve never made it across the road without being spotted, even as heavy as this rain was coming down. A lucky fall, sending him into this shallow depression, had shielded him from discovery. Just like his luck at realizing that he was being driven instead of chased – tonight he was getting very lucky.

He stood slowly and wiped mud and water from his face and clothes. He retrieved his duffel bag and headed across the northbound lanes of traffic, reaching the far side of the road without any more problems and, scrambling down the opposite embankment and back into the woods, he turned south. His mind was made up now – he could head north and get away from all of this trouble, but he had to end it all, here, tonight. The Sheriff needed to pay or he would hound him forever, sending out APB’s and manhunts and announcing Jack’s presence to the entire world. And Jack wanted to stay unknown for a long, long time.

Jack skirted the tree line that edged the highway, working his way south, following the patrol car. Chances were pretty good it was headed for a roadblock of some sort, and hopefully, the Sheriff would be there, waiting for him. The dogs had been making a lot of noise, driving him east, and if Jack hadn’t taken that slight northern detour, he would’ve come out on the Interstate a little ways south of here. That’s where Beaumont had to be—Jack knew it.