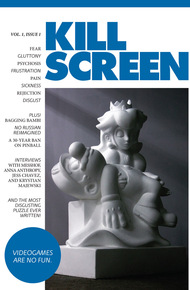 Welcome to the "No Fun" issue. 96 pages of the best writing and illustrations in the biz.

Jason Fagone talks to the team behind Big Buck Hunter Pro, and studies the allure of its gun. John Teti shares the incredible story of New York City’s 30-year ban on pinball. J. Nicholas Geist tells a story of marriage, judgment, and World of Warcraft addiction.

Jenn Frank picks the videogame feminist of the decade. Jason Killingsworth is schooled by an eight-year-old Guitar Hero prodigy – and takes the opportunity to grow up. Gus Mastrapa battles anxiety and finds a rescue in EverQuest.

Rob Dubbin digs up the strange, hilarious fan fic of internet legend Stuart Michigan, starting with his latest work, “Some Russian.” Majed Athab reflects on the Six Days in Fallujah controversy, and asks: why is it easier to make a ridiculous war game than a realistic one?

And Zack Handlen brings it home with the most disgusting puzzle in interactive fiction history.

The premier issue of the premier literary video game magazine, including 96 pages of interviews, analysis and intriguing thoughts on Six Days in Fallujah, pinball, Guitar Hero, and a host of others.

From the article Ball Is Out of Control by John Teti

You wouldn’t figure Roger Sharpe as the peep-show type. His colleagues at Manhattan’s N. W. Ayer advertising agency never imagined that their down-to-earth, Midwestern copy writer—the unassuming new guy with the bushy mustache and wire-rimmed glasses—would patronize a skin-flick joint. But he did, every morning and night, always returning to the same place on 42nd Street near Sixth Avenue. (This was in 1971, before Times Square became toddler-friendly.)

It’s not that Sharpe was ashamed. In fact, he cherished his ritual. Twice a day, weaving through the tourists and panhandlers, he ducked into a seedy storefront with darkened windows. He asked an attendant for quarters, and then he fed his compulsion: He played pinball—honest-to-goodness pinball, with flippers and pop bumpers and slingshots and whatnot, and he had his pick of four machines—four machines!—lined up by the door.

Sharpe may have been new to the city, and not yet sure how the subways worked, but he had a vague conception of the tawdriness that went on in the back rooms, behind the doorway with the black velour curtain. That held no interest for Sharpe, though—certainly nothing like the allure of the silver ball. His urge was to master the machine. So he stoked his pleasure center in the peep-show lobby before and after work, until the day he walked in to see all of the machines upside down, in pieces, on the floor.

Sharpe approached the guy who dispensed the quarters. "What happened?"

"The city came in and they busted us."

"…For the pinball machines," Sharpe said.

Maybe once he said it out loud, it would make more sense. Or not. "They came in and took the pinball machines"—he gestured toward the black curtain—"and not what’s back there."

In the early 1940s, New York City banned pinball. It sounds like one of those wacky laws that get passed around on email chain letters—"In Nebraska, it’s illegal to skydive naked on Sunday," etc. But as Sharpe discovered, this one was real—and enforced. It was a lasting legacy of the city’s storied 99th mayor, Fiorello LaGuardia.

When modern American politicians rail against the youth-corrupting evils of videogames—the graphic violence of Mortal Kombat, say, or the sexuality of "Hot Coffee" in Grand Theft Auto: San Andreas—they’re following in LaGuardia’s footsteps, although it’s a clumsy sort of mimicry. For despite their threats and public indignation, anti-game politicos like Joe Lieberman and Hillary Clinton haven’t managed to effect any lasting change beyond little ratings labels on box covers. In contrast, LaGuardia not only succeeded in purging the game that he hated from New York City, but his anti-pinball campaign dictated the city’s policy for decades after he left office.