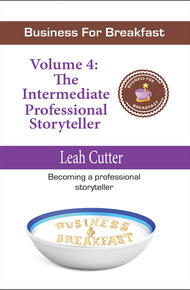 So. You're a writer.

You're no longer a beginning writer, however. You've mastered some of the elements of your craft, have learned the basics of storytelling, are starting to see some success. What do you need to take you to the next level?

This book is aimed at the intermediate. Not the beginner. Not the advanced. But the writer who is actively working on their craft and yearns to improve.

This book is as much of a guide as anything else. Every chapter has a section called "Clues"—questions that you can ask yourself about your writing to see if you need to work on this technique or not.

Leah Cutter's Business For Breakfast series takes big writing concepts and puts them in bite-size chunks, perfect for reading over that most important meal of the day. Leah's been writing for twenty years now, and she has the enviable gift of making something complex into something easily understandable. – Kristine Kathryn Rusch

There are, at last count, at least 14 million books giving writing advice.

How is this one different?

1) It's written by a writer. A writer with a lot of experience. An advanced writer, who admits that while she doesn't know it all, she's no longer a beginner. Or even intermediate. By the time this book is published, she will have written twenty (20) novels, with many more planned. In addition, she's written more than seventy (70) publishable short stories (stories that are finished enough to send out) and many of those have been bought by major magazines or anthologies.

2) It isn't something made up out of whole cloth, but an amalgamation of things that she's learned, from many different sectors and teachers and mentors. And from writing. A lot. (For more sources, see the Appendix.)

3) This book is as much a guide as anything else. Every chapter has a section called "Clues"—questions that you can ask yourself about your writing to see if you need to work on this technique or not.

4) This isn't a beginning writing book. Probably 13.9999 of those 14 million writing books mentioned above are for the beginning writer. (The Business for Breakfast series has two of those: The Beginning Professional Writer and The Beginning Professional Storyteller.) You'll note, however, that the title of this is The Intermediate Professional Storyteller. There are many techniques (many!) that are more advanced and beyond the scope of this book.

(That's one of the many fun things about writing—there's always more to learn. If you don't like to learn, if you think you can "master" writing and will never have to learn anything again, walk away now.)

6) Don't think there really is a sixth difference. Try this book. You may enjoy it. And you may learn something new.

One of the things that I am asking you to do is to trust me.

If I say something that seems completely outlandish, trust me, it isn't.

If I say that some writers, as part of their process, do X, trust me. I've met those writers and talked about their process. I'm not making it up.

Perhaps you, as a writer, don't use that process. Or don't think that way.

As for any "rule" that I state, you (and I) will be able to point to half a dozen examples of where this rule is "broken."

Those are the exceptions.

Learn the rules first. Then figure out how to break them without breaking your writing.

At the end of many of the sections, you'll find a heading called, "Clues". In those sections, I talk about things that readers may point out about your stories, trying to give you a diagnosis tool so you can figure out if you need to work on a particular technique or not.

Beginning writers go to critique groups. This is a good thing. Most writers need to learn some level of critical skills. A good critique group is difficult to find. They are also worth their weight in gold when you're just starting out.

A good critique group will instinctively know, and possibly be able to articulate, that you are only going to critique the story, not the storyteller. (Or as I talk about it among my writing friends, as my original critique group expressed it, you're there to talk about the chair, not the chair maker.)

However, chances are, as you advance as a writer, you'll grow beyond your critique group. It is a very rare group indeed that can all go beyond the beginning level together.

So what do you do next? When you realize that perhaps your group has grown toxic, that those who aren't writing as much are jealous and actively discouraging you from writing?

You need to find readers.

Think about it this way: at the end of the day, you are producing your story for readers. Not for other writers. Not for your critique group. But for the everyday Jamal who wants to be entertained while reading on his phone on the bus, or for the voracious reader Jagita who goes through a dozen books a month.

Readers are your audience. Readers read your writing. They are generally not writers themselves. (While it is possible to get a reader reaction from a writer, you'll need to find writers who are in the intermediate to advanced stage, and who can divorce themselves from the writing process and just enjoy something as a reader, which again, is a more advanced skill that not all writers possess.)

How do you find a reader? That takes time. There are a lot of articles on the web about finding them, cultivating the relationship, caring for and feeding your readers, etc.

A good reader is worth their weight in gold. Keep them close to you, and keep them satisfied.

My assumption is that you've moved beyond critique (which, at the heart of it, is all about tearing things apart, looking for something that's wrong) and moved onto first readers (who are all about telling you, "I got lost here" or "I didn't believe this character" or "Wow was that great! Where's the next book?").

A truism that I believe Neil Gaiman originally coined:

Trust your readers. Then trust your inner writer to get to the heart of the matter and fix what needs fixing.

Stages of a Writer

First Level: You're only concerned with the words on the page. You may or may not care about the story. You're focused on just what's in front of you, on polishing every sentence until it's perfect. You haven't moved beyond the words. You may have some idea about being a writer, but it's a dream, not a goal with concrete steps.

Second Level: You're starting to gain some awareness of characters and plot. You're starting to see bigger picture items, like storytelling, the seven-point-plot, etc. However, you're still very concerned with grammar, word choice, sentence structure, and so on. You still haven't gained an awareness beyond the page. You may or may not have success at this level. If you do sell things, it's very spotty.

Third Level: You've moved beyond worrying about the sentence-by-sentence work. You're starting to learn about pacing, overall structure, etc. You're starting to care about what the reader thinks. Your awareness is spreading from the page to beyond. You've also started to learn about the business, and are aware that this is a business. You've moved beyond having dreams about 'being a writer' to coming up with a plan and concrete goals, steps you can take to move your career forward.

You can make a career at this level. But unless you continue to strive and learn, it won't be a long-term thing. You'll stop selling and you won't know why.

Fourth Level: You don't care much about the words or the sentences on the page. That's what your copyeditor is for. Instead, what you care about is how your words affect the reader. Your focus is on controlling the reader. Does the story work for the reader? You are doing your best to become a mind control artist. Your second focus is on the business, and how to have a long-term writing career. You care about learning and are always striving to improve.

Me? I'm somewhere between third and fourth level. I'm not a mind control expert, but I'm working on it. I write from deep inside a character's point of view, and I'm aware of how my reader is reacting.

To give an example, consider the word barn.

Barn is a false detail.

What does a barn look like? Is it that dilapidated graying building with the roof caving in? Is it brand new, painted a pristine red, with a steep roof for cold Midwest winters and lots of snow? Or is the roof rounded like the old colonial barns, and has it been converted into a mother-in-law out on the back forty?

When I use a detail like barn, I've released the reader to come up with their own idea of what a barn looks like. Every reader has their own picture of a barn in their head.

As a mind control artist, I want them to think of the barn that I envision. Nothing else. (If it's essential to the story, that is.)

Which are the important details?

Let your character tell you. What she notices is important. Nothing else.

In general, this book works with the structure of the seven-point plot. That is:

Note that the very first point is character.

This is one of those trust me points.

Yes, there are stories where the character takes a backseat to the idea. Possibly some of your favorite fiction is written that way.

But in modern (2016) stories, readers read for character. So you need a good one.

That might not be where you get your ideas. I rarely start with the character. How you generate your characters is also 100% up to you. Do you go to a coffee shop and build your character as an amalgamation of the people there—the barista's horsy laugh, the studiousness of the student in the corner with her three textbooks and computer open, the limp of the old man with haunted eyes? Do you use character sheets, and roll up your characters as you would for a role playing game? Do they just wake you up in the middle of the night saying, "Write about me next, damn it!"?

Characters can be concocted. Given foibles and fears, likes and dislikes, accents and metaphor suites. That's more of a beginning writer technique.

Actually writing from deep inside the point of view of a character is a more advanced technique.

So several of the chapters in this book will go into more depth on character. Not the generating of them—you can already do that. But writing from that place inside of them that makes them come alive on the page—that's something I can help you with.

The second point of the seven-point plot is setting. Again, as a more beginning writer, you might generate a staged setting pretty well. Taking that setting to the next level, so your reader believes it, is a more advanced technique.

After going into character and setting, there are other, more technical, actual writing techniques I want to cover, such as layering in detail, cycling, and controlling your pacing through paragraphing.

You'll notice that there are many, many other parts of the seven-point plot structure that I won't be covering in more detail.

This book is designed to get you to the next level in your writing career. You can look at the other points as signposts, places you might want to go and explore next.

Because there's always a next. Another hill. Hell, another mountain range beyond the one you just climbed.