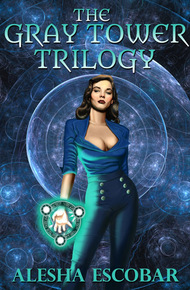 Alesha Escobar writes fantasy to support her chocolate habit. She enjoys reading everything from Tolkien and Dante, to the Dresden Files and Hellblazer comics.

She resides in California with her partner-in-crime, Luis Escobar, a 20-year art veteran on The Simpsons television show. Alesha is the author of the bestselling Gray Tower Trilogy, an action-packed supernatural spy thriller set in an alternate 1940's. The Tower's Alchemist, the first book of the trilogy, is now being adapted to screenplay.

You can find Alesha posting weekly at her blog Fantasy, Mashups, & Mayhem: https://www.aleshaescobar.com

This daring fantasy trilogy has been described as a mash-up of Hellboy and Agent Carter. The complete collection includes: The Tower's Alchemist, Dark Rift, and Circadian Circle.

Be a spy. Save the world.

If only it were that simple.

The Nazis have unleashed occult forces throughout Europe, and the Allies are forced to recruit wizards to help them fight in the streets of Europe and in the shadows.

Among them is the battle weary spy, Isabella George, a Gray Tower dropout trained in Alchemy. Longing for retirement and a life of peace, she accepts one final job-extract a deadly warlock from Nazi occupied France and prevent him from unleashing an alchemical weapon that will devour the continent.

But France is crawling with the Cruenti, vampiric warlocks who feed off other wizards. When things don't go according to plan, one Cruenti sets his deadly eyes on her.

Plans within plans. Plots versus counter-plots. Heists gone wrong, Vatican wizards, and the greatest manipulation of history that has ever been seen, is just a taste of what Isabella George is in for, in this action-packed supernatural spy thriller.

I was really delighted to have Alesha's Gray Tower Trilogy in the bundle. A mash up of HellBoy and Agent Carter was always going to be irresistible, and these are thrilling, twisting stories set against the backdrop of the Nazi invasion of Europe. – Simon Kewin

I carved the alchemical symbol for Fire in the waiting room's doorframe—a triangle. My head swam from the protective seal Nena had placed on my mind, but I managed to swat her hand away when she reached for the doorknob. I raised my trembling index finger to my lips in a gesture for her to remain quiet, and I charged my Fire symbol with magical energy, feeding it with mental concentration.

I unlocked the door and swung it open. The Cruenti warlock was gone. He may have worn an expensive black suit and appeared innocuous with his slight frame, but my senses had gone off and screamed for me to run. I breathed a low sigh and decided to obey my instincts. I had rushed into the waiting room, my eyes on the exit just across from me, when something wet splashed onto my forehead. I immediately looked up to see the warlock plastered to the ceiling, salivating and watching me with his electric blue eyes. I swung my knife just in time to slice his chest as he landed on me. I fell into a roll with him and ended up on top. As I drove the blade toward his heart, he sent me flying backward with an invisible force. I crashed against a few folding chairs lined up against the wall and dropped my golden knife. I cursed at Nena in my head for having invited the warlock in.

My head still throbbed from the mind seal, and I hardly had time to react when he rushed me and bared his elongated canines. I threw my arms up in a defensive position when he reached me, and he bit into my right forearm. I growled in pain.

I swung a left hook and nailed him right in the face. When he locked onto my arm like a pit bull, I howled and threw all my weight into a pivot, and we both hit the floor. He drew back when Nena screamed and smashed his head with a potted plant. He snarled at her, and she fell back. I rolled over toward my knife on the floor, grabbing it just as Morgan caught me by the ankle and twisted the bone. I heard a crack and screamed at the searing pain that shot through my leg. I used my good foot to kick at his face, which now resembled a rabid animal's.

The Cruenti crawled onto me and went for my neck. I held him at bay with my injured arm, and his swollen tongue, full of purple splotches, darted toward my face. I gripped my knife and made a few deep cuts into his torso. He shrieked and backed off to allow the wounds to regenerate. I jumped to my feet and nearly collapsed on my broken ankle. I eyed the doorframe where I had laid my Fire symbol and limped toward it. Nena stood in the little adjacent room, gripping another folding chair and using it as a shield once I made it inside. When he glided toward us, I released the Fire symbol, and his head lit up like a torch.

The putrid smell of burnt flesh filled the room, he ran and jumped out of the waiting room's window. I cast a Circle of Protection around the little house and leaned against the doorframe for support. I still felt light-headed from Nena's mind seal, and tears stung my eyes from the pain in my arm and broken ankle.

"I'm sorry, Isabella," Nena cried. "He's been my client for four weeks and has never done that before."

"Are you sure?" I motioned toward my purse with a weak hand. "Grab my satchel with the jade powder."

The gypsy woman did as instructed—and took a few crisp bills while she was at it. "He told me he's been a Cruenti for five years, but wanted treatment. He said that he was starting to change into a Black Wolf, and if Octavian can be a powerful Cruenti without being transformed into a Wolf, then why can't he."

"Well, he should've worried about the side effects before becoming a Cruenti." I opened my satchel and sprinkled the jade powder on my arm. I lowered myself to the floor and rubbed it into my ankle. The jade stone had healing properties, and I would purchase it in small quantities from time to time. It was expensive as hell, but well worth it in my line of work.

"He paid me good money to help treat him," Nena said, adjusting her ugly plaid dress. "He said he wasn't eating wizards anymore."