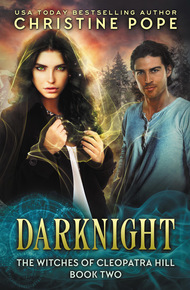 Darknight - The Witches of Cleopatra Hill Book 2 by Christine Pope

What happens after your dreams come true?

Kidnapped by a rival witch clan, Angela McAllister envisions a dark future for herself until she discovers her captor's brother is the unknown man who has haunted her dreams since she was a child. Forced to re-evaluate everything she's ever known about the Wilcox witches, Angela begins to explore the powerful connection that binds her to Connor Wilcox, despite the generations of hostility between their families and the disapproval of those closest to her. And when a dark, malignant force arises, Angela knows she must draw on her growing powers as prima to protect enemies and allies alike...even if her choice threatens to tear her new and fragile love apart.

Christine's Witches of Cleopatra Hill books are a phenomenon, with ten volumes to the series so far. If your tastes run to paranormal romance, these witchy books will be sure to cast their spell on you. – Simon Kewin

"Eat first, then talk?" I asked. It was pretty obvious that he really didn't want to have this conversation.

Something that was almost but not quite a sigh escaped his lips before he set the sandwich back down on his plate. "I just want you to know that none of this was my idea."

"I had a feeling," I said wryly, "considering you can barely even make yourself look at me."

This time he did glance up, and I had to hold myself steady as the eyes I had dreamed of so often met mine, and held. The muscles in his jaw visibly tightened. "I want to look at you," he said. "It's just…dangerous."

So he was feeling it, too. I'd begun to wonder. "It's all right. We're both adults. We can control ourselves, right?"

His hesitation was obvious. At length he said, "Right. Anyway, I know how bad all this looks. Believe me. And you have every right to think the worst of me. Only…"

"Did you ever stop to think that all those times you dreamed of me, I might have been dreaming of you?"

His tone wasn't exactly pleading. Not quite. But I could sense something in him was begging me to listen to what he had to say.

"No, I didn't," I replied. "So…why do your brother's dirty work for him? Why not tell him the truth?"

"I think he knew it, deep down, but didn't want to acknowledge it. My dreams became…distorted…these past few months. I think he was trying to interfere."

"Doing a pretty good job of it, too."

Connor frowned then, the straight dark brows pulling together. "He was in your dreams?"

"Yes," I said shortly. I didn't want to go into any more detail than that.

"Well…." He reached out and drank some water, then set his glass back down. "I didn't interfere, because I knew he wouldn't be successful in trying to bind you to him. And then once you were here, he'd be so desperate to make sure you were at least bound to a Wilcox that he'd have me try to make the binding."

Maybe that made some sense, but I still didn't like it very much. I unwrapped my sandwich and forced myself to take a bite, although my appetite seemed to have deserted me. After I had sipped at my own water, I said, "But you knew I…liked…you. Why not kiss me at the Halloween dance, or down in Sedona when we met at the Day of the Dead festival?"

"We weren't in Wilcox territory."

Anger flared then, hot as the desire I still felt for him. Another tradition, another ritual. One might think that a prima should travel to meet her prospective consorts, rather than make so many men come to her, but I'd always been told the binding must happen on her clan's land, so that her powers might remain within her domain. By sealing me to Connor here, in the heart of Wilcox territory, it meant that my loyalties were now supposed to lie with them, rather than with the family I had left behind.

So Connor might profess distaste for his brother's methods, for the way I'd been brought here by force, but in the end he'd still gone along with Damon's plan, compelling me to join myself with the Wilcox clan. Well, almost. Connor and I had made the consort bond, but it wouldn't be complete until we slept together, and as far as I was concerned, it would be a cold day in hell before that happened.

"You're just as bad as your brother," I snapped, and pushed my chair back and stood. There was no place for me to go except that cramped little guest room, but I'd rather stay in there for the next ten years than spend another minute in Connor's company.

"Angela, please — " He reached out, his fingers wrapping around my wrist.

Warmth surged through me. Yes, let him touch you…let him take you….

"No!" I cried out loud, and wrenched my arm away.

He let go at once, wide-eyed, as if shocked himself by the reaction he must have felt within his own body. "I'm sorry — I didn't mean to — "

I didn't want to hear his excuses. Ignoring his pleading look and the barely eaten food on my plate, I turned and hurried up the stairs, running for the guest room and then locking the door behind me. A whispered spell put an extra binding on the lock, but I had no idea whether it would be effective. I didn't know what to think, here in the heart of enemy territory.

A long silence, and then I heard slow, heavy steps outside in the hallway. Connor said, sounding close enough that he must be right on the other side of the door, "I'll leave your sandwich and water here if you want it."

There was a faint clink, as if from setting the plate and glass down on the wooden floor. Immediately afterward, he moved away again. A minute later came the soft thud of the front door shutting.

Good. We needed some distance between us. Miles, preferably.

Why, then, did I feel so abandoned?