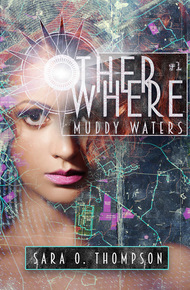 My first attempt at a book read suspiciously like a certain required-reading novel whose title rhymes with "Gourd of the Spies." I moved on from plagiarizing famous authors and into writing terrible poetry. Then the poetry stopped being so terrible. I started writing short stories, which were also not so terrible. Eventually I tried writing a book that I came up with on my own. It was terrible. So I wrote three more to get the hang of things. And here we are.

When I'm not writing, I perform improv comedy, tell stories on stage, ballroom dance, and craft. I also have identical twin sons. My husband is an ICU nurse and is a great person to be married to if you are an improv person, a book lover, and a nerd. He's also handy in medical emergencies.

Twenty years ago, the boundary between worlds dropped. It will be a while before the political, social, and religious upheaval settles down but the good news is: now you can book a vacation to Valhalla as easily as you can go to Las Vegas. Your real estate agent might be a Wood Sprite. Your mechanic might be a Minotaur. For better or for worse, Supernormals are part of Earth life.

Five years ago, Tessa Reddick was convicted of killing her entire family: 37 Witches from one of the most powerful covens in history. She's been locked up at Lakeland Psychiatric hospital, still grieving but mad as hell at whoever–or whatever–put her there.

Half an hour ago, a handsome FBI agent showed up to spring Tessa from the joint –but there's a price. A series of murders is picking off Supernormals and the feds need the help of the last known Reddick Witch.

Determined to learn who set her up for the fall, help solve the FBI crimes, and maybe get closer to her mysterious (and seriously hot) Dark Elf partner, Tessa is more than willing to play Witchy Nancy Drew.

But Tessa has few friends left and something is coming for her, too – maybe it's the one who framed her and killed her coven, or perhaps a new foe with a taste for Witch's blood.

Solving crimes, doing magic, drinking bourbon. It's dirty work, but somebody has to do it.

Sara is another writer with whom I share a publisher, and I was delighted we were able to include Muddy Waters in the bundle as the book was only published this month. It's set in a universe where the walls between the worlds have fallen, an idea I love. Muddy Waters combines magical fantasy with investigative thriller to create something truly unique. – Simon Kewin

Someone told me once that if you have to ask whether you are going crazy, then you likely are not, in fact, losing your mind. I spent five years hoping that was true.

The thing is, I had finally gotten the litany of names right in my head, so it sounded beautiful. The names of all the women of my family.

Just how much time had I spent doing so? A thousand hours? Two thousand? More? Sometimes the list was the one fragile thing anchoring me to this world.

Time becomes a strange beast indeed when let loose from a clock.

It was this line of thinking I pursued, when on a tail end of a quick tap, the door to my room unlocked, then clicked open.

Nurse Tina, heavy of thigh and heavier of makeup, stood there with one of the boneheads. It was almost never the same bonehead. In five years, I rarely had the same one. I think the theory was the Reddick Witch is such a dangerous criminal, they'd best change up my handlers in case we have an "incident."

I was flat on my back on the cool floor with my legs up the wall. I tipped my head to look at her, upside down. Tina doesn't take any shit from anybody, Human or otherwise.

"A visitor? Another magazine reporter?" I made air quotes around the word "magazine," still not deigning to move. Because why not?

Tina shook her head, over-inflated bleach-blond hair totally motionless. She's one of those southern women who think the higher their hair, the closer they are to Jesus. "Naw, we don't have no magazine reporters. Come on now, get up."

I took a while to get off the floor.

"How long has it been since you washed your hair?" Tina put a hand on her hip, a teasing smile showing her crooked teeth. She's not scared of me or anybody else for that matter. Granted, no one can do magic in the building, so she has little to fear, but that's beside the point.

"For your information, I washed it yesterday. As you know, I am without such luxuries as proper grooming equipment. What do you think this is? A Beverly Hills spa?" We both laughed. Gallows humor does a body good. I raked a hand through the tangled mess on my head, which, unless I was missing my mark, currently looked like I went through a carwash then fell asleep in a wind tunnel. It had grown way out and now fell not simply down past my shoulder blades but out past the ends of my shoulders. And, of course, I would not be so lucky as to inherit my mother's beautiful straight black hair. No, it had to be some other relative's crazy red spirals.

Derek the Bonehead brandished a pair of soft restraints, which I casually allowed to fasten on my wrists. Then he put on the restraint belt tethering us together. I allowed that too. Really, what was the point in struggling? Back when I fought every chance I got, I would buck and writhe and make it hard for them to get me to do whatever they wanted me to do.

Maybe I got smarter.

Maybe I just gave up.