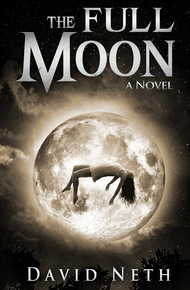 David Neth is the author of the Under the Moon series. He lives in Batavia, NY, where he dreams of a successful publishing career and opening his own bookstore.

The Full Moon by David Neth

Kathy and her sister, Samantha, have always been a team. Throughout their time as witches, they've taken out more than their share of bad guys. But after Kathy meets Will, who she learns is a demonic Dark Knight, her loyalties begin to change.

Meanwhile, Samantha doesn't trust Will or his intentions. Still, Kathy can't help but feel tempted by the dark side as she falls deeper in love with Will. Crossing over would give Kathy the freedom to do whatever she wanted with her magic. No rules. No limitations. It would also mean breaking the bond she has always shared with her sister, who has made it clear that she wants nothing to do with the dark side.

When Will proposes they take over the underworld, Kathy loves the idea of having power. But it also leaves her with a choice that will change her life: abandon her family and the life she has always known, or give up the love of her life forever.

Witches, demons, family loyalties and the lures of evil – there's a lot to enjoy in David's novel, the first in his Under the Moon series, which now stretches to five books. If you like sagas of magic and danger, you'll love these books. – Simon Kewin

After dinner, the two walked hand-in-hand to the end of the pier. The evening had gone perfectly. Kathy hadn't enjoyed a date so much in a while. She could already tell that things were different with Will.

The full moon was out, reflecting off Lake Erie and illuminating the sky. The glow from the city lights helped brighten the sky as well.

"It's beautiful," Kathy said. She rested her head against his arm.

"I like to come out here every so often just for the view. Presque Isle has an even better view, but—"

"I think this is perfect." She looked up at him and reached up on her toes to meet his lips. Kathy knew from his kiss that falling for him was a good thing—a great thing.

Prior to meeting Will, she'd felt completely burnt out from all the stress in her life: making a living with no skills an employer would be interested in, helping her sister raise Josh and Chris, and keeping up with her supernatural responsibilities was a bit too much at times. But standing out on the edge of the pier with Will completely erased all that, and for the first time in a long time, she was carelessly happy. All her subconscious thoughts were gone, and she was entirely in the moment.

The two were so consumed with each other that they didn't hear the splashing of the water. It wasn't until Kathy felt a slimy hand on her leg that her attention was brought back to reality.

She landed with a thud on the pier as something pulled her into the water. The water was up to her waist by the time Will had hold of both of her arms and pulled her up. The splash of the water hid the creature from sight, which Kathy was grateful for. She didn't want Will to see. She might be able to still pass this off as her being clumsy.

Once she was safely on deck, Will asked if she was all right. She barely had time to nod before Vepar lunged from the water and landed on the edge of the pier. He hissed at the couple, spraying them with water and slime.

Kathy put her hands up and froze both Vepar and Will. She needed to act quickly. She knew there would likely have been people in the hotel or farther down the pier who had seen or heard the commotion. She searched for her purse that held the potion to kill the water creature, but she couldn't find it. She must've dropped it in the water when he first pulled her in.

She needed to get Will away safely without exposing who she was. If that was even still possible. She could easily have unfrozen him and ran, but then she would be facing twenty questions about what happened. She wasn't ready for that conversation with him yet.

Before she could think of anything, her magic wore off and both Will and Vepar unfroze. The creature swiped at Will with his claws, tearing his blazer. Kathy pulled off her shoes and drove a heel into the creature's back. She saw the point of the knife she'd stabbed him with the week before and knew it wouldn't stop him. He turned and pushed her. Landing on the edge of the pier, she moved to get up, but when she shifted her weight she lost her balance and began to topple into the dark water. She gripped the bollard on the edge of the pier to keep herself from falling in.

Looking up at Will, she saw him charge Vepar, and a large sword appeared in his hands. Swinging it sideways, he tore through the creature's flesh and its head dropped to the dock. He kept swinging until pieces of Vepar scattered across the end of the pier. When he was done, he stood and admired his work, huffing and puffing. Kathy could see blood sprayed across his face in the moonlight. The sword in his hand disappeared, and he reached down to help lift Kathy back onto the dock.

He looked at her and said, "Grab the other end of the net over there and help me round up the body before anyone sees."