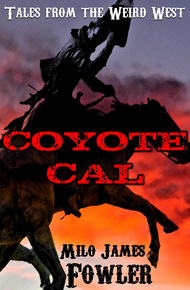 Milo James Fowler is a teacher by day and a speculative fictioneer by night. When he's not grading papers, he's imagining what the world might be like in a dozen alternate realities. Over the past 5 years his short fiction has appeared in more than 100 publications, including AE SciFi, Cosmos, Daily Science Fiction, Nature, Shimmer, and the Wastelands 2 anthology. Two novels and a variety of short story collections are now available. Milo is represented by the Zack Company.

There's trouble on the range. In these thrilling tales from yesteryear, Coyote Cal and his trusty sidekick Big Yap encounter a wizard able to change his shape at will, a scheming witch, a confused zombie, la chupacabra grande, bloodthirsty vampyres, and other sordid fiends. Our heroes will have to rely on their wits, skills, and loads of hot lead to ensure justice prevails.

Milo and I have been writer friends for years now, and I love his work – it's always imaginative, pacy and cool. Before I knew Milo I didn't know the weird west was even a thing, but I'm glad I found out. His Coyote Cal stories are funny and thrilling and the stories involving Donna "the Witch" Jamison are definitely a different take on witchy fantasy… – Simon Kewin

They hadn't known what to expect, but it sure as hell wasn't this.

The barn stood alone in the middle of a barren stretch of hardpan where weeds might have sprung up from the godforsaken earth once upon a time. Plenty of land for wheat fields or grazing pasture stretched between hills at each compass point, perfect for protection from harsh winter winds and runoff during spring rains. It could have been a thriving ranch or farm long ago, but now the whole spread lay cold and abandoned, nothing more than a forgotten memory. There were no remains of a farmhouse, no sign of the settlers who'd once built this sun-bleached, dilapidated edifice. It looked as though it had sprung up out of the lifeless ground of its own accord, which didn't bode well for what would be found inside.

They'd been following a trail for the past two days, and it led straight to these lopsided doors, chained shut and padlocked as if to keep something unsavory contained inside. But that couldn't be. Whatever had sucked the life out of the animals they'd passed along the way would have had no trouble snapping through this chain, just as it had snapped the neck of every cow, horse, sheep and goat they'd counted so far.

Now they stood just inside the dusty threshold, staring upward, unable to believe their eyes.

"So, what do you make of it?" Coyote Cal managed once he'd found his voice, fingers crawling for the holstered six-gun tied down on his thigh.

Donna Jamison, resident expert on all things weird and wicked in the Wild West, let loose a low whistle through her teeth, shaking her head in bewilderment.

Big Yap—Cal's loyal sidekick who was old enough to be his father, maybe even his grandfather—kept his sawed-off shotgun at the ready, the same weapon he'd used to blast off the padlock and allow them entry.

Manuel, their trusted guide from the nearby town of Paseo Grande, crossed himself repeatedly with his mouth sagging wide open. "Hijos del Diablo!" he gasped.

"What the heck is he babbling on about?" Big Yap grumbled.