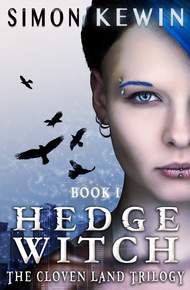 At Manchester Central Library, she's caught in the crossfire between the witches and the undain, two worlds fighting for an old book. Cait takes the book and is told to run, hide the book or destroy it. The undain's secrets are buried in its pages, and they want it almost as much as they want her.

The fate of two worlds is at stake. Along with definitely-not-a-boyfriend Danny, Cait has to decide what to do: run, fight, or hope it all goes away.

But then Cait learns who she really is, along with the terrible truth of what the undain have been doing in our world all this time…

I love stories that move between our mundane reality and magical other worlds, and the Cloven Land Trilogy was the result of wanting to write my own. In this, the first book, Cait Weerd has no idea she's anything out of the ordinary. That changes pretty rapidly as she finds herself pursued across the city she lives in by monstrous horrors and their earthly minions… – Simon Kewin

Cait pushed her way through the crowded tram and just made it to the doors before they slid shut. Outside, she stood for a moment and breathed. Her eyes had closed more than once on the journey into Manchester, the result of a long, hot day at school and the rocking of the carriage as it rattled into the city. A breeze blew down Mosley Street but it did little to lift the oppressive weight of the air. The weather forecast had predicted thunderstorms. There was no sign of them yet.

The street was busy: office workers sweating in their suits and ties, shoppers burdened with purchases, rowdy children clouting each other with their backpacks. Beyond them all rose the grey, curving walls of the Central Library, like a round fortress built in the heart of the city.

She sighed. She'd promised herself she wouldn't get off here. She thought about Devi, Rachel, Val and Jen, the friends she'd promised to meet one stop up the line at the Arndale Shopping Centre. She watched the tram thundering off that way, ploughing through the traffic toward Piccadilly Square. They'd be there already, cruising through the crowds, laughing and shouting, never bothering to move out of anyone's way. As a group they were invincible. She imagined them veering from shop window to shop window, shouting their disgust at this, their burning desire for that. And no one, no grown-up, no security guard, would dare confront them.

She loved them all, but in her mind she saw herself at the back of the group, saying nothing, not involved. It was like that some days. She would look at them from a distance, marvelling at how they all talked at once but still seemed to hear what each other said. Other times, without really knowing how, she was a part of that. But not today. She couldn't face them today.

She looked down the tracks the way the tram had come. The rails gleamed in the sun, running past the oblong bulk of the war memorial and out of the city, south toward the suburbs.

Her mother would be getting home about now. Cait imagined her switching on the television, pulling steaming food from the microwave. She should be there, too. Another promise. But she couldn't face going home either. She'd left a message, done the right thing. She'd go back later.

She sighed again. The tram had vanished and she hadn't moved. She couldn't just stand there, people would stare. Come on, Cait. Back to the real world.

She thought about last Saturday, her disastrous attempt to secure a weekend job at Bling Thing. He'd said that, the manager, as he explained to her why she was so unsuitable for the role.

"Look, love. You have to live in the real world. You have to smile, be happy to serve the customers. Be enthusiastic about the products. Be excited by them."

His words had amused her, then annoyed her. He'd wanted her to be something she wasn't. She'd felt trapped, had to fight down the urge to flee. It was all so mundane. Where was the beauty in it? Where was the magic? She'd imagined the man would be old but he was in his twenties or something. He was smartly dressed, polite, but his staring eyes, the way he droned on about retailing, made her shudder and say little.

His office was a square, shabby room at the back of the store, its walls concrete blocks painted lime-green. On the floor, a kettle and a jar of instant coffee sat on a tray. Boxes of stock were strewn all around, in contrast to the manicured layout of the shop. When he took off his jacket, she saw the sweat-rings creeping around his armpits, circles widening toward the white stains of past sweat-rings. She thought of herself still at Bling Thing in five, ten years' time. Interviewing some other poor soul for a job. Would she sound like him by then?

A poster on the wall, the blu-tac holding it up visible as dark smudges in each corner, said Smile - it costs nothing. It wasn't true. Right then, a smile would have cost her more than she could give. And what she actually said to him was, "Hmm."

And so she hadn't got the job. She was a failure, it was clear. She was no good at school. She tried, she really did, but she always ended up antagonizing her teachers for some reason. Now she couldn't even cut it as a Saturday girl in Bling Thing. She was a failure, going nowhere. Already her life was over.

She threw her rucksack over one shoulder and set off, a small pile of text books cradled in one arm. How she hated her black school uniform. She'd tried to subvert it with blue in her hair and piercings that contravened all the rules. None of it helped. She hated how she looked. She scowled as she walked, warning everyone not to bother her.

Slumped against the grey stone wall of the library, out of the way of hurrying feet and the light of the sun, a man sat on a piece of tatty cardboard. A threadbare blanket was wrapped around his shoulders. On the ground before him lay a hat containing a paltry four or five coins, all coppers. He held a sign in his hands that said simply, Please. The rest of the message, whatever he was begging for, had been torn away. He was asleep, his head nodding forward, long, matted hair covering his face. The crowd ignored him, probably didn't even see him.

She wondered who he was, where he'd come from, what his story was. Perhaps he was one of the few who'd escaped the fire: the factory blaze that had killed her father. This man had limped out, choking, his clothes smoking, his skin burned. He was disfigured now, unable to work, unable to do anything but sit and beg. The formless pleading of that single word on his sign.

She wanted to go to him, sit with him, talk to him. She felt suddenly closer to him than all the people around her. They had so much in common, this shared bond of not belonging to the crowd. She stopped walking. A woman dressed in a smart blue business-suit, her gold necklace expensive, white earphones in her ears, tutted loudly at Cait for being in the way.

A flap of the beggar's cardboard seat caught the breeze and she saw the words This Way Up in red letters. Underneath, smaller, the name of some company.

The man looked up sharply at her. Or rather, through her to something beyond, as if he couldn't focus his eyes properly. He was young. He couldn't possibly have worked with her father. Of course. His skin was unscarred, his features thin and pale. Anger flashed through her, an anger that was part adrenaline. The stupid ideas she had. What was she thinking?

"The hunt! The hunt is coming! Monsters! Run and hide, run and hide!" the man shouted. No one paid him any attention. "They'll chase you down, corner you. You'll see! Sleep safe in your beds, that's when they come. The dead of night, down these streets, knives flashing. Run and hide, run and hide …" He trailed off, his head lolling again as if he was a toy whose battery had run down.

Cait stood for a moment, feeling ridiculous. He was just some loser, disgusting, probably mad.

Then he looked up, this time directly at her, focusing on her. A look of surprise filled his face.

"You?" he said, not shouting now, but still speaking loudly. "Here?"

Concern, then fear, then amusement flashed across his features. He started shouting again, pointing at her.

"They will hunt you! Once they find you, who you are and what you are, they will come! Day or night! You … here all along! All along!"

He started to laugh. A crazy, utterly uninhibited sound. He flicked his head from side to side, expecting everyone to see the joke.

It was too much for Cait. She turned and ran for the library, eyes down, shutting out the beggar, his words knives in her mind.