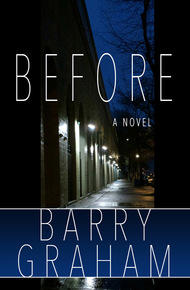 Before by Barry Graham

Francoise was "improbably lovely," the type of character you see in movies. Of course, her life was a life, not a movie. But as the narrator, Barry (a writer who may or may not be the author), stunned by the news of her death, tells "her" story, he cannot find the reality of his friend in the dark, romantic film that flickers in his mind. As he searches for Francoise in a nightmare cityscape of desperate sex and casual violence, he finds only reflections of his own loss.

In haunting, cinematic prose, BEFORE examines the impermanence of human connection and probes the arcane links between seemingly unrelated experiences.

The ultimate slow burn novel about a lost love and a broken social scene, Before was a cult hit in the 1990s and remains an emblem of that decade. Barry Graham writes in an understated, nearly Zen, style without a wasted word or movement, and with the empty unsaid and undescribed spaces fueling the story. – Nick Mamatas

It was the least hip music club in town. The guy who ran it was a talentless musician who wrote maudlin, introspective songs influenced — he said — by Ian Curtis and Leonard Cohen. He told his friends that he saw himself as a contemporary hybrid of the two. Venue managers didn't share his opinion — few would give him a gig, and the two or three who did were so traumatized by his performance that they told him never to come near their clubs again, even as a member of the audience.

So he'd hired the back room of an unpopular bar and organized a monthly club, with himself as the headline act. He didn't have enough money to book professional musicians, so he named the club Songwriters' Open Showcase and announced that anyone who came along and paid to get in could perform a fifteen-minute set. Consequently, the club was always filled to capacity. Every undiscovered genius within a twenty-mile radius who owned an acoustic guitar would show up, ready to share their bedroom blues. There was no actual audience; nearly everyone who came wanted to perform.

Françoise wasn't aware of this. She had only been in the country for two weeks. The night she wandered into the club was the night of the Open Songwriting Competition. This event was held about three times a year at the whim of the organizer. Françoise hadn't come along on purpose; she'd just been walking past the venue and noticed the details chalked on a blackboard outside. Inside, she stood at the bar and didn't talk to anyone. Her English was good, but she didn't have confidence in it. She ordered a beer by mumbling and pointing. As she drank it she was aware that a number of people were staring at her, but she didn't worry about it. She was used to it.

After a while the organizer came up to her and, unable to say what he meant, asked her if she wanted to enter the competition. "All right. But I don't have a guitar." He said she could use his. "Thank you." Would she like a drink? "I have one."

The club didn't have a good atmosphere. The throng was silent during each performance, but everyone was impatient for their own turn. None of the acts were impressive. Françoise felt sorry for them.

Then it was her turn. The organizer handed her a guitar. She checked that it was in tune, then walked to the microphone. For the first time, the assembly of egos became an attentive audience.

"Hello. My name's Françoise. My name is French, I'm Dutch and this song is Spanish." Some people laughed. Someone shouted Go for it. Françoise laughed, then played the song. She had composed the music, but the lyrics were adapted from a famous Spanish poem. Her singing voice was deep, a little like Nico's but with some range and a lot more warmth. The audience applauded when she'd finished, though the applause might not have been for the song. If this was a film, Françoise would finish her song, put the guitar down and, as an electrified audience stood up and applauded, she'd walk out of the club without waiting to find out whether she'd won the competition. All night, everyone would talk about her. And none of them would ever see her again.

As it was, she smiled, gave the guitar back to the organizer, went to the bar and got another beer.

I'm remembering this as I sit at a table in the cafe/bar of an art-house cinema. It's appropriate. Françoise's life was a life, not a film. But I'm remembering it as a film, and presenting it to you as a film. Otherwise I don't know what it means or how I can bear it.

Françoise sat in the club until it closed. She wasn't placed among the winners of the competition. The overall winner was an Englishman who'd sung a Dylanesque political song in an American accent.

A few men tried to talk to her. She was hostile towards them, not because she felt that way, but because it was the only way to get them to leave her alone. She drank two more bottles of beer, making them last as long as she was able to.

As she was leaving, the organizer asked her if she would play at the club again. She pretended that her English was worse than it was, and he gave up trying to get through to her.

Outside, the streets were crowded as people poured out of closing bars and headed home or to nightclubs. There were the usual fights over taxis. Françoise walked past it all, not looking at any of it. She slowed down when she saw a man and a woman standing under a streetlight. The woman was crying and her body was shaking. Her hands were pressed to her face and she was saying, "Please don't hurt me." The heavy, belligerent-looking man was talking to her soothingly, stroking her arms, trying to embrace her. Françoise couldn't tell whether he was menacing her or trying to help her. She decided not to interfere. They were drunk and she was afraid that they both might turn on her if she said anything. She quickened her walk. Wrapped in her long coat and with the streetlights casting her shadow on the sidewalk, perhaps she imagined that she looked like Alain Delon in Le Samourai.