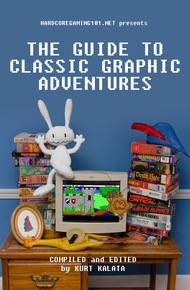 Kurt Kalata is an ardent video gamer from New Jersey. He has founded websites such as The Castlevania Dungeon, which focuses on Konami's long running, vampire slaying series, and Hardcore Gaming 101, which gives comprehensive reviews focusing on the history of gaming. In addition to his own sites and books, his writings have appeared at 1up, Siliconera, Gamasutra, and The Armchair Empire.

The Guide to Classic Graphic Adventures by Kurt Kalata

In 1984, Roberta Williams of Sierra On-Line designed King's Quest, the world's first graphic adventure. A huge step beyond the text-oriented games that preceded it, the genre took the world by storm, and proved immensely popular with computers over the next decade. A combination of storytelling and puzzle solving, they provided the ability to explore a world and experience a narrative without the need for twitchy reflexes demanded of arcade games. The Guide to Classic Graphic Adventures includes reviews for over 250 games from the golden age of the graphic adventure genre, running from 1984 to roughly 2000, focusing on promiminent publishers such as:

Over 750 pages of reviews, interviews and analysis from the golden age of the graphic adventure genre, spanning 250 games from the LucasArts, Sierra, and dozens of other companies.

So when did the adventure game genre collapse? The genre started with the mainframe text game Adventure, which was expanded into Colossal Cave. This begat Zork and founded Infocom, while a little company called On-Line Systems (later known as Sierra On-Line) began putting graphics in these games and ended up with Mystery House and King's Quest. They exploded in popularity around the introduction of the CD-ROM, where the expanded storage space allowed for fancy multimedia productions. But all bubbles burst, and the cause was any number of issues. Part of the blame lays on outside factors, like the burgeoning popularity of first person shooters and real time strategy games. An equal part of the blame can be placed on the games themselves, which either diluted the experience in favor of serving a broader market, or failed to evolve and stuck with the same archaic puzzle solving mechanics they'd been maintaining for years. The European market continued to be sustainable, but in America, the adventure game had all but perished.

The genre has seen a resurgence lately, thanks to the rejuvenating efforts by Telltale Games, as well as an influx of Japanese games on Nintendo DS and a number of high quality independent games. It's still not as prominent as it was in its glory days, however, and older gamers will remember a time when LucasArts and Sierra reigned ? the golden age of adventure gaming. While fans are mostly familiar with the likes of King's Quest and Monkey Island, there are hundreds of adventure games produced the world over, and this book aims to catalog them.