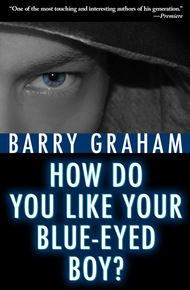 How Do You Like Your Blue Eyed Boy? by Barry Graham

Andy Saunders knows how to survive. He survived all alone in Los Angeles as a teenager, and he survived in foreign combat zones as a soldier. He survived homelessness on the streets of Phoenix, Arizona, an unforgiving desert metropolis that is the fifth-largest city in the nation.

He's had enough of surviving, and now enjoys life, living with his girlfriend, working as a handyman, teaching martial arts and playing in a punk rock band. But, when a friend falls victim to a contract killing and the police do nothing, Saunders decides to make some inquiries—then finds that he has passed the point of no return, and that the killer is now hunting him. He once again must fight for survival, and the fight will lead him to a truth more awful than anything he has ever known.

The wide open spaces of Arizona turn dark and claustrophobic in this hyperviolent, hypersexual neo-noir novel of seething cruelty and rationalized evil.

You're going to like this blue-eyed boy, because you're safely here in the world of scene and experience, and he is trapped on the page. Andy Saunders is a violent man, a punk, formerly homeless, and now somewhat at piece. But in noir you're only ever screwed, so when his friends start turning up dead, Andy has to do…something bad. – Nick Mamatas

The sun was flattening itself on rooftops, dragging along alleyways. When it was time to do it, the killer got out of the car, locked the door, and walked toward the house. There was only one car parked in the driveway, the one the killer knew belonged to Ayrton. So there shouldn't be anyone else in the house.

The killer rang the doorbell. The door was opened by a woman in her thirties. Ayrton's wife. Shit. Experience had taught the killer that when things went wrong it was best just to proceed as if they were going right, and blow away any extraneous obstacles. So when the woman looked askance, the killer calmly said, "Is Mr. Ayrton home?"

There was the panicky crash of footsteps coming down the stairs. The killer turned, faced the door, held the pistol in both hands, aimed it. A boy, about fourteen or fifteen. "Mom, what's—" The killer's bullet took him in the throat. He sat down on the floor and silently cried himself to death.

Where was Ayrton? Probably arming himself. Would he keep his guns upstairs? Probably. The killer debated whether to go upstairs or wait it out. Best to wait it out, not walk into something. But what if he had a phone up there? The killer moved fast and quietly into the hall, knelt at the bottom of the stairs. "Ayrton? Do you hear me? Your wife's dead. Your brat's still breathing. But he won't be for much longer unless you get down here."

"Okay. I'm coming." It sounded like he was crying.

Ayrton appeared at the top of the stairs. The killer leveled the gun and emptied it. Ayrton flew backward out of sight. The killer reloaded the gun, then moved up the stairs, crouched so low as to be almost squatting. Ayrton was lying against a wall. He wasn't moving and the lower half of his face was hanging off. The killer shot him twice more to be sure.

Back in the living room, the killer checked that the woman and boy were dead. The living room door suddenly swung open. The killer hadn't heard any footsteps. The killer flew to the floor, rolled, pointed the gun. Didn't shoot.

The girl who came in couldn't have been three years old. She looked at the killer, then stumbled over to the dead woman. She said, "Mommy." She shook the corpse. "Mommy." She didn't cry at first. She didn't seem to get it, seemed baffled by all the blood. She didn't look at the killer again. The human being inside the killer decided not to shoot her, reasoning that she was too young to be able to give the police a description.

The killer left the house, slammed the door and walked down the driveway. Drove to the rendezvous and dropped off the gun. Changed cars. By the time the car arrived at LAX its driver was a human being. The human being who was sometimes a killer bought copies of Spin and Vanity Fair to read on the flight home to Phoenix, Arizona.