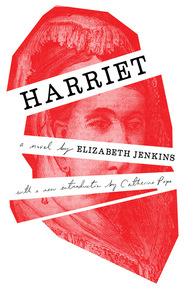 Elizabeth Jenkins was born in 1905 in Hitchin, Hertfordshire, where her father, James Heald Jenkins, had established the Caldicott School. Jenkins attended the Modern School and St. Christopher School, Letchworth, and the women-only Newnham College, Cambridge, where she studied English and history, though women were not eligible to receive a degree until 1921. Afterwards, she took a position teaching at King Alfred School in Hampstead. During the Second World War, she left her teaching position and worked assisting Jewish refugees and London air-raid victims for the Assistance Board. She later worked in government positions for the Board of Trade and the Ministry of Information.

Through Newnham's principal Pernel Strachey, sister of Lytton Strachey, Jenkins was introduced to leading literary figures Virginia Woolf and Edith Sitwell, and in the late 1920s Jenkins herself began to write. Her first novel, Virginia Water (1929) was praised by Woolf as "a sweet white grape of a book," and the novel's modest success led to a three-book contract with publisher Victor Gollancz. Jenkins would go on to write a dozen novels, the best known and most popular of which were Harriet (1934), based on a real-life sensational Victorian case, and The Tortoise and the Hare (1954), which Hilary Mantel, reviewing a Virago reissue in The Sunday Times, called "as smooth and seductive as a bowl of cream".

But Jenkins was perhaps best known for her nonfiction, including psychologically insightful biographies of Jane Austen, Lady Caroline Lamb, and Queen Elizabeth I. In 1940, she helped to found the Jane Austen Society and took part in its campaign to buy Austen's house at Chawton.

In 2004, Jenkins published a memoir, The View from Downshire Hill; the title refers to the Hampstead neighbourhood where she lived for more than a half-century in a Regency house she bought in the 1930s. Elizabeth Jenkins died in 2010, aged 104.

Harriet Ogilvy is a young woman with a small fortune and a mental disability, making her the ideal target for the handsome and scheming Lewis Oman. After winning Harriet's love, Lewis, with the help of his brother and mistress, sets in motion a plan of unspeakable cruelty and evil to get his hands on her money. With consummate artistry, Elizabeth Jenkins transforms the bare facts of this case from the annals of Victorian England's Old Bailey into an absolutely spine-chilling exploration of the depths of human depravity.

Based on the real-life 1877 case of Harriet Staunton, Harriet (1934) was a bestseller and a major critical success, beating Evelyn Waugh's A Handful of Dust to win the Prix Femina Vie Heureuse. This edition features a new afterword by Dr. Catherine Pope.

Jenkins is all but forgotten now, but Harriet was a hugely popular book in the 1930s, and for good reason: it's lurid and intelligent, shocking and depraved, and the book lures you in with the prose of a historical cozy novel about an illustrious family. But someone spilled black paint all over the illustrations. Keep the lights on! – Nick Mamatas

At half-past five on a January evening of the year 1875, Mrs. Ogilvy's drawing room was a pleasant place; it was a small first-floor room and, though it could not be said to be furnished with taste, there was a warmth and brightness about it which made it very comfortable on such a raw evening. The mantelpiece under the ornate gilt glass was looped with rose-red velvet; the cur­tains were a white chintz covered with enormous roses and carnations in alternate rows connected with wide-flung sprays of green; the sofa was a similar medley of red and white, but the armchair in which Mrs. Ogilvy was sitting was a deep crimson, and this, with the moss-green carpet, was pleasantly mellowed by the bright-burning fire, and the lamplight which glowed on the many pictures framed in plush and gilt, and on the piles of oranges, apples, and grapes which covered the sideboard.

Mrs. Ogilvy, knitting with the precise click of shining needles, had the room to herself except for her little nephew, who was playing with marbles and a solitaire board on the floor, half under the sleek white fall of tablecloth. He was a retiring child, always slightly uneasy when addressed by a grown-up person. He was not, in fact, Mrs. Ogilvy's own nephew, but that of her second husband, a Unitarian minister; Mr. Ogilvy was shy and unsociable, and little Tom took after the family. Mrs. Ogilvy's only trial in connection with her husband was that it was so dif­fi­cult to make him really comfortable. He never seemed to notice what there was for dinner or to find any pleasure in his wife's pretty, comfortable household arrangements; however, she did not complain; she was a lucky woman, she thought, as she sat knitting before the fire, just glancing at the tea table with its flow­ery china, its silver muffin dish, and a dark plum cake, thickly iced. She was considering whether that tea had stood too long, or whether it would do for Harriet when she came downstairs; she had not had tea with them, since she had been upstairs pack­ing to go on a visit to their relations.

Some people would have thought Mrs. Ogilvy, despite her hus­band and her housekeeping, a very unfortunate woman, and there were moments when she gave way to the idea herself, though it could not often prevail against the cheerfulness of her dis­po­sition. Harriet, her only child, was what the villagers in Mrs. Ogilvy's old home would have called a natural. Her in­tel­lect was not so clouded that intercourse with ordinary people was out of the question; the deficiency showed itself rather in a horrid un­couth­ness, the more noticeable in that she had a vigorous and powerful zest for such aspects of existence as were intelligible to her; she was not easy to put out of the way. In fact, her continued presence in any household was a strain, and consequently, since her mother's second marriage, an arrangement had been made by which she spent a month at a time with various relations; Mrs. Ogilvy had been comfortably "left" by the departed Mr. Wood­house, and Harriet also had her own money: three thousand pounds at present, and a contingent reversion of two thousand more; so that some of their less well-to-do connections were glad to put up with the slight awkwardness of having her in the house for a short space, in consideration of the handsome board­ing fee which was paid them for it.

Mrs. Ogilvy's feelings were not exalted, but they were strong in every kind, and she had not only the mother's special affection for an unfortunate child, but she often lost her temper with Har­riet when she encountered in her an obstinacy and full-blooded determination the counterpart of her own. She had neither the enlightenment nor, for all her forcefulness, the self-control to pre­serve any detachment towards her daughter; but, not infre­quent as the disturbances were, they were always lost sight of as one of Harriet's temporary absences drew near, and it was an eye of fond affection that Mrs. Ogilvy turned on her as she came downstairs to have a cup of tea before departing in a cab to Norwood.

"Now, girlie!" cried Mrs. Ogilvy, "I've let the tea stand, but Hannah shall bring you another pot if it's got too black." Harriet came with little bouncing steps towards the tea table and looked into the teapot.

"This is do, Mama," she said; she sometimes confused small words, though she could always make her meaning clear. At the age of thirty-two she had a sallow countenance, with strongly marked lines running from the nostrils to the corners of the lips; her chin receded, and her eyes were the glutinous black of treacle. Apart from her expression, and the slightly slurred enun­ciation of her words, however, her appearance was one of rather particular neatness and cost. Her scanty brown hair was crimped in a fringe and elaborately bunched at the back of her head in a series of small wiry plaits. She was wearing garnet earrings and a shield-like brooch of pinchbeck pinned to the front of her dress, which was a handsome blue silk; it had just come home, and Mrs. Ogilvy looked at it critically and approvingly.

"Miss Marble makes up very well," she said; "that silk wants justice doing to it, and it has it, in my opinion."

Harriet looked down complacently as she sat drinking her tea and eating a piece of cake; but suddenly her expression changed to one of peevish anxiety. "My boots!" she said, and stared about her.

"There, bless me, I was forgetting," said Mrs. Ogilvy, rising in rustling amplitude and fetching a parcel from under the side­board. "Here they are, now. Tom fetched them on his way home from the dentist, didn't you, Tom?" Tom, still half under the table­cloth, pursuing his solitaire, raised his head and assented shyly. Harriet snatched the parcel and tore off the wrappings. In­side were two elaborately cut button boots with narrow toes which had been neatly though heavily soled in shining leather. As she turned them over, her face relaxed into a smile, showing almost the whole depth of her teeth.

"A really nice job he's made of it, that I will say," said Mrs. Ogilvy; "I'll put them on the hearth, dearie, to warm while you finish your tea." She took the boots and herself turned them over, examining them with satisfaction. One of the points of warm­est sympathy between her and Harriet was the latter's acute enjoy­ment in anything concerned with food or dress; on these topics her intelligence was perfectly normal, and Mrs. Ogilvy's pleasure in promoting her enjoyment and in sympathizing with it was the more intense for being restricted in other respects. She now returned to her armchair and watched Harriet finishing her tea; to her eye, misted by affection and use, the traits in Harriet's face which shocked a stranger appeared hardly more than a slight blem­ish, rather endearing than otherwise. She was called to the door by the maid's bringing down Harriet's box. "Fetch a cab for Miss Hatty, Hannah," she said, and went upstairs to make sure nothing had been forgotten. Harriet meanwhile was eating and drink­ing in great content; Tom, crawling cautiously out of his semi-concealment, glanced up at her and inadvertently caught her attention; she was about to take a currant bun onto her plate, and something, perhaps, in its glossy roundness struck her drolly. She held up the bun to him and gave a loud laugh. What goes on around and above the heads of young children is seldom comprehended by them except in a series of striking vignettes; in after life the most vivid impression of his cousin which Tom Ogilvy retained was the sight of her holding up a bun and laugh­ing with great heartiness but apparently with no meaning.

"Now, Papa," Mrs. Ogilvy was saying as her husband came out of his study into the hall, "you'll tell the cabby where to go, won't you? You know I don't like them to see Hatty with­out some­one at the back of her." Mr. Ogilvy said yes, in an unenthu­siastic manner; he opened the front door and saw the cab coming up the street; it drew up at the door while Mrs. Ogilvy was say­ing all the usual farewells to Harriet and recapitulating the in­struc­tions Harriet was to give as to her own comfort once she arrived at the destination, concluding with a perfunctory message of goodwill to their cousin Mrs. Hoppner. The cab lamps shed a misty radiance across the humid dark, and Harriet, in a pelisse and a smart straw hat, bundled in while the luggage was hoisted onto the roof. Mr. Ogilvy directed the man to drive to Norwood, and they drove off, Mrs. Ogilvy watching the last of their dis­appearance from the lighted hall door.