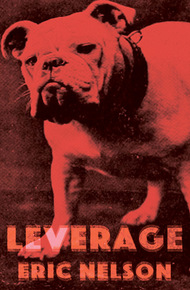 Eric Nelson is a prose writer living in Queens, New York and a regular contributor to The Fanzine. His essays, criticisms and interviews have appeared or are forthcoming in The Atlas Review, Tin House, The Rumpus, The Billfold, Bust, Keep This Bag Away From Children, and Volume 1 Brooklyn, among others.

Somewhere between where men and women seek red-eyed revenge and rolls in the hay lay the characters in Leverage, from the farm roads of mid-60's Texas to contemporary suburban New Jersey. As each of them wander in the pursuit of happiness and peace of mind, the American dream is made lucid at a fever pitch where schlub is king and the sun shines on a dog's ass from dusk until dawn.

Noir is the anti-epic; like a fight it's better when it's short. Nelson's short stories hit hard and leave marks. Some people will do anything to achieve their version of the American Dream, and Nelson's characters reveal, and sometimes revel in, the nightmare it is. – Nick Mamatas

A line of women and children had already formed in front of the makeshift concession stand on the side of the barn before Lynn could announce the barbecue sandwiches were ready. The sun, now in its decline, became less oppressive on the crowd gathered on the southern tip of the Turner property, at the end of a dirt road off Farm to Market Road 524, seventy miles west of Galveston.

With the last piece of pork shoulder chopped and the beer and Coca Cola on ice, a bell announced the stand open for business. Nobody paid mind to the constant barking of dogs, except for the men who remained behind. None of them were interested in barbecue or beer.

Across the yard, George Turner swept dust out of the pit his uncle Slade had constructed from fencing a decade before, preparing to draw the scratch line through the middle. While known to be a competent carpenter and honest businessman, Slade Turner had spent most of his past two decades trying to be a good husband, loving father and a respected dogman.

"That fence out there is just like Hammerhead was, it's got deep game. Never quits," he said to his nephew whom he had raised as one of his own. That was two years ago, before leukemia began creeping through his wife's bones and Hammerhead Junior's loss to the legendary Wino, owned by Brazoria County's District Attorney Fred Tudor, the progeny of a five-generation dog family and the richest in the county.

As his cousin Maurice was set to inherit the family business, George hoped for a job at the carbon black plant in Sweeny once a position opened. In the meantime he worked in the garage alongside his cousin, a morose man often mistaken for mute, and spent weekends working for his uncle, feeding and training the dogs and taking bets when they hosted conferences every other month, a cut of which went to the house and was split between the two. In the interim, Maude, Slade's wife, took to poor health and the president had been shot through the back of the head in Dallas.

The weekend's conference would mark a full year from her passing during Hurricane Betsy. She was still with him in his mind's eye at every step, even as George took her place in bandaging the dogs' wounds in the den after matches. During these quiet, sad moments he knew they had done right in raising him as their own, watching the young man speak softly to the injured pup as he sewed stitches much like his wife used to.

Slade had been absent during her death, waiting for the storm to pass while he holed up in a motel on the way back from a visit with Floyd Beaudroux in Louisiana, unaware that his wife had taken a turn for the worse in bed. Though honored to have met a man he admittedly looked up to in the bloodsport, he regretted the trip. His wife's insistence on going beforehand failed to alleviate his guilt.

He still trained Colby dogs, all bred from the same lineage of Hammerhead, but in the time that followed he began to lose more matches than win to fast-lane dogs with hard mouths, dogs who fought high in the shoulder, instead of for stamina. Luckily none of his contenders ever failed to scratch at their opponents and none were considered curs.

Maurice and his sweetheart Lynn both operated the family service station Slade opened upon returning from the First Great War and marrying Maude soon after. Lynn made and served barbecue in the store on weekdays while Maurice ran the business from sunrise to 9p.m., six days a week. On Saturdays, Lynn joined George as he walked Lobo, the latest offspring in the lineage of Hammerhead that was said to have deep game. The dog had been sold to another breeder only to be repurchased at twice the original cost months before in a desperate bid to match Wino. Most of the other dogs had also been sold. Several litters killed each other.

The number of kennels in the yard dipped as Slade began selling them. Even in the decline, with his wife gone, he now spoke of hardly anything else.