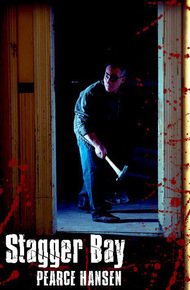 Markus, framed for a mass murder he didn't commit, is freed on DNA evidence. An unlikely hero after saving a school full of children from a savage 'Saving Private Ryan' level hostage situation, he finds that 15 minutes of fame is the worst thing that could possibly happen to him.

With the help of his estranged son Sam he battles a corrupt racist small town police force; dodges the attentions of a hillbilly mafia pulling the strings from behind the scenes; and plays cat and mouse with the sadistic serial killer who actually committed the murders he was framed for.

Nothing's worse than doing something bad in a noir, except for maybe doing something good as recently freed prisoner Markus finds out when he saves a school bus full of children. Hard-hitting, extreme, and sometimes borderline insane, this hillbilly noir about the discontent of fame really is balls to the wall fantastic. Read it in a single sitting! – Nick Mamatas

The morning I went to hell I was passed out drunk.

One moment I was lost in the sodden oblivion last night's twelve-packs had bought. The next a whole passel of cops was rat-packing me in my bed, wrestling me over and shackling my wrists behind me before I could fight back.

The feel of cold steel snapping shut around my wrists made me relax, despite them ratcheting tight enough to cut off the blood flow and hurt. I'd worn such bracelets more than a few times as a kid and the familiarity cut right through my alcoholic haze, made me stop any resistance.

I was wrenched to my feet and propelled out of the master bedroom, all of the cops shouting: at me, at one another, at the world. As I was staggered toward what was left of the front door, my son Sam stood by the TV holding one of his action figures.

Sam's eyes were bright blue and wide, looking as fake as those painted on the toy dangling from his hand. His thumb was rammed up to the root in his mouth even though he was ten and no longer a baby at all. The TV was tuned to one of his cartoons, the volume turned high so the show's atonal music and manic sound effects blared loud and cutesy-bouncy.

Our eyes met as the cops bum-rushed me along. My eyes were bleary; I was dull-witted as a steer headed for the slaughter chute. Sam's eyes were blank dull stones.

As they stumbled me out the front door my wife Angela stood in the kitchen with her knuckle in her mouth, biting down on it hard enough to draw blood. Her thick black hair wasn't brushed and combed into the long shining raven's wing I so loved to run my hands through. Tangled and bedraggled, it spilled over her face.

Angela was short and petite. Now she looked shrunken as an abandoned doll, surrounded by the appliances and furniture we'd bought to shield us from our former lives before Stagger Bay. Her eyes burned at me past her bedraggled locks as I somehow tripped off the porch and onto my face.