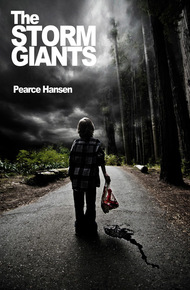 The Storm Giants by Pearce Hansen

Everett has a high tolerance for pain – but that's only natural considering his childhood dentist was a Nazi war criminal who did all his work without anesthetics. Now the dentist's widow is knocking on Everett's door, looking for help retrieving a cache of death camp gold.

Everett's mom Bambi is on her death bed and still managing to foul things up for him. His wife Kerri is being forced to examine things about their life together that she's successfully ignored since the beginning. And his son Raymond is watching his every move — he wants to be just like his daddy when he grows up.

To keep his family alive Everett has to break every promise, and return to the crazy-clown, evil-funhouse mindset he thought he'd left forever. Throughout, the treacherous storm giants will be his only friends. They'll help him review the lessons he learned as a child: that blood isn't shy about spilling, and that it always means something to somebody when people leak.

There's this guy named Everett, see, and he has a problem: his dentist was a Nazi. And now the dentist is dead and someone stole his bag of secret Nazi gold. Most noir is somber, but The Storm Giants is downright gonzo. Everett, "luckily", was horrifically abused as a child, which has given him the ability to block out pain and negative emotions—a trick he needed in the dentist's chair, and now with neo-Nazi brigades and murderers, and con men, and even the dentist's widow arrayed against him. Real black fiction, no novocaine. – Nick Mamatas

Even though Everett was deep in the redwoods between townships, he'd had one eye focused on the rear-view mirror for a while. He was south bound driving the speed limit, and the car behind kept climbing his tail pipe, crowding his ass on every curve.

On one nasty hair-pin the headlights of the car behind veered to the left and off the road as if on rails, the magician's rabbit scooting back into its master's hat. Everett leaned on the brakes even as the car in the rear view shot across the shoulder and plunged down the slope out of sight. This was a winding mountainous stretch of Highway 101, and there wasn't much to stop that car from jouncing all the way down to slam into the boulder strewn river a hundred feet below.

He scuffed the Escort to a halt on the shoulder, but just sat with his hands on the wheel. A mutinous rumbling in the back of his head: the smart move was to be away from here.

"Shut up," Everett said, and the rumblings complied, though sulkily.

Everett opened the door and got out, went around to the shoulder and peeped over the edge. The rear end of the ex-tailgater's auto was about ten feet down. It had struck a rock outcropping and stood vertical on its crumpled nose, spared the full drop.

The headlights illuminated the tree tops below, and the red taillights beamed up to dazzle. Everett could smell gas even from up where he stood.

Tufts of grass and scrawny bushes provided adequate handholds as Everett slid down the steep slope, reached the car's rear end and scuttled down the passenger side to stand on the outcropping. He smelt blood's sly copper, wavering under the stench of gasoline.

He peered inside the shattered window, one hand shielding his eyes from the running lights' glare. The child seat in back looked like some beast had mauled it. A baby hung suspended in the belts.